India seems to have finally arrived into the digital fashion era thanks to Covid-19 that imprisoned humanity into homes against its will, which ended up being a really big blow and a culture shock. But human beings are not to be defeated so easily when it comes to the fashion business, which has always been a platform for glitz, glamour, glitter, networking and hyper socialising for success where new ideas have to be implemented.

In September 2020 this year, the fashion aficionados got their hemlines in order, straightened their sagging seams and decided not to be buttonholed in their homes. 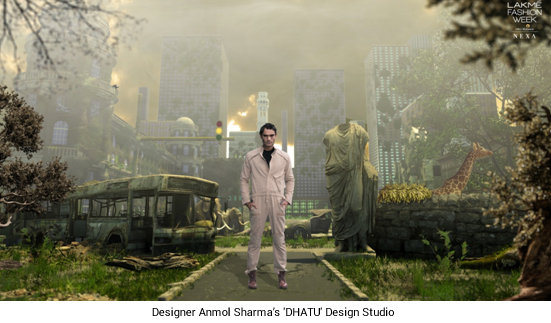 Digital technology came to the rescue of the forced caged fashion connoisseurs and one glam couture week as well as two back-to-back 5-day fashion weeks went into top gear and digital mode.  The Fashion Design Council of India presented the first India Couture Week 2020, from September 18 – 23, 2020 with 12 designers and then 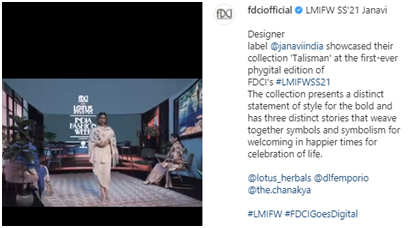 designers 23 shows and an assortment of seminars on the business of fashion. Three fashion weeks streamed well-directed shows with slick photography, makeup, clothes and story lines. 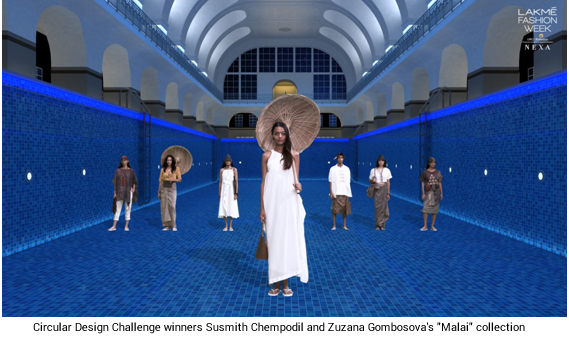 Creativity of the films and the locations was definitely at a very high level with the latter being of prime importance for most of the films, even if the collections at times lacked innovation. 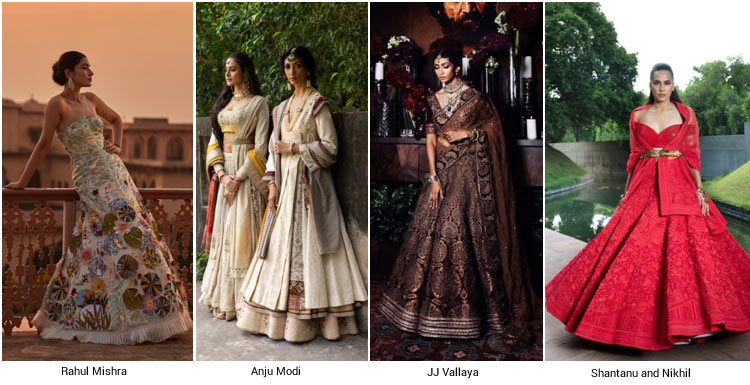 With couture as the prime focus of the event, designers used exotic locations for the films to add value to their collections. Gaurav Gupta was at the Oddbird Theatre Dhan Mill Compound, Rahul Mishra at the Tijara For Palace Resort, Dolly J preferred the Rajamahal Palace Jaipur, Reynu Taandon picked the Raj Nahar Singh Palace Balabhagh, for Shantanu and Nikhil it was the Roseate Hotel Delhi as the perfect venue, while Kunal Rawal had the male models marching up and down the stairs of the Asiatic Society of Mumbai. Falguni Shane Peacock recreated the backstage look at Hotel St Regis, Mumbia and Manish Malhotra used the grand Leela Palace, Delhi, for his opulent bridal wear line. Anju Modi’s bridal look was showcased at the One Style Mile, Delhi, while J J Valaya selected his own farmhouse as the location. Amit Aggarwal however shot his film underwater, sending a message that his creations were truly weightless. 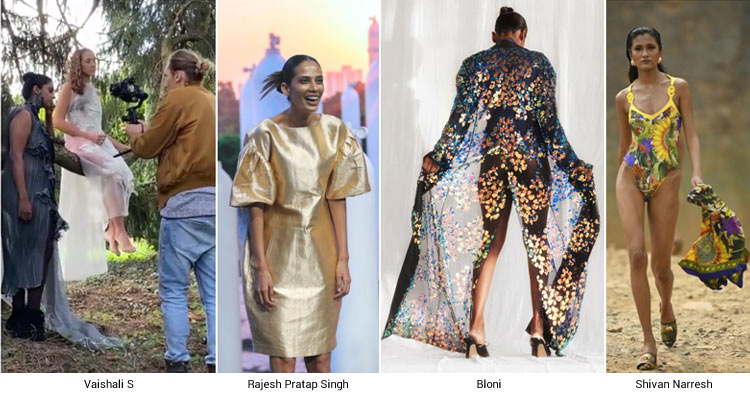 The 34 shows by 43 designers were shot in just 14 days in the offices of the FDCI Delhi and the backdrops were created to give the feel of the collections. There were however, designers who selected exotic places like Vaishali S who shot her film outside Milan, Italy with Italian models. Rajesh Pratap Singh

used the oxygen cylinders as major props to send a message about the artisans’ plight. Many designers felt that forests, gardens, wildlife locales, and weavers’ looms were a great option, while many had models traipsing through water or floating on it, which seems to have replaced the ramp. Bloni used high technology for his hi-tech futuristic collection. Rina Dhaka’s backdrop was the migrating artisans and their plight; while Shivan Narresh brought an exotic beach atmosphere as the background.

LFW with 35 designers and 23 shows made extensive use of the green screen and then projected an assortment of backdrops, which at times did not quite match the collections. The Hotel St Regis, Mumbai also proved to be a helpful backdrop when different parts of the property like the car park, backstage area, terrace and kitchen were used. Computerised backgrounds like ruins of dungeons, florescent arc tunnels, devastation and destruction or large geometric landscapes often dwarfed the models and distracted the viewers from the collections. There were some exotic locations again from Amit Aggarwal, who this time around had the models floating in the air for his “First Light” collection of bridal wear. 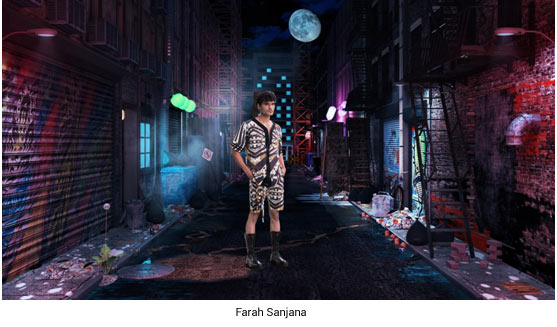 The digital concept of a fashion week was relatively new to the Indian fashion fraternity that loves to bask in the drama and fanfare of showstoppers, Bollywood stars on the ramp and off, as well as loyal fans and celebs cheering them on.

A rain check of the digital fashion weeks will reveal the Pros and Cons of going high tech, to push Indian fashion globally through the Internet and how successful it was. 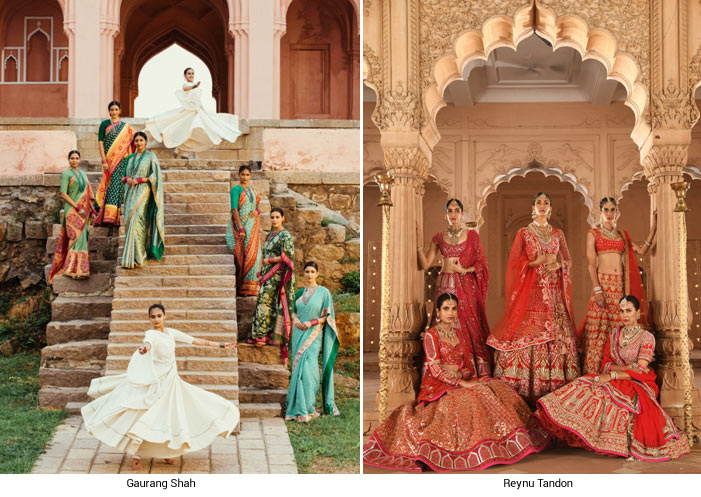 Imagine getting the front row for every fashion show without lifting a finger or batting an eyelid! No begging for invites or passes to see the favourite designers’ collections. Shows were available with a click of the mouse in the comfort of the bedroom, lazing in relaxed PJs, munching chips and savouring a Café latte. That’s right, fashion lovers watched fashion on different sites, paused them, binge watched as many shows as they wanted, when they desired and even watched them in loop, made notes, if they planned to take inspirations from the collections. 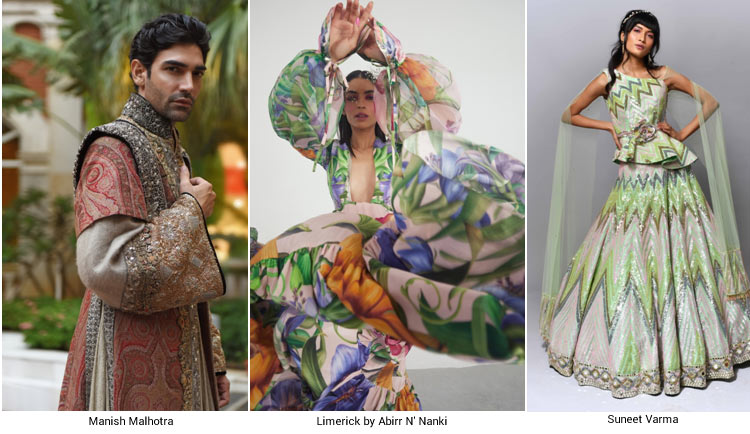 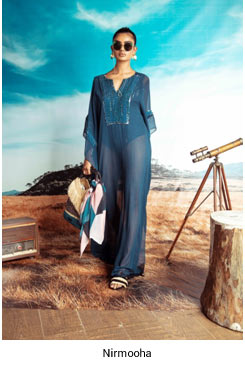 It was wonderful to observe each outfit’s detailing, the embellishments, embroidery, cuts, and construction without straining over the heads of spectators in the front. The battle for seats was quite passé and the length of the shows was just right – 4 to 10 minutes in which nearly 30 creations whizzed past, if the video was not paused too often. At other times, designers even showed just 4 outfits, calling it a capsule collection to get their creativity across and saved money by hiring maybe just a couple of models.

The shows were also worth watching, as film directors put their creativity in grey mode and dreamt up a screenplay that was far more entertaining than sullen models strutting down a 60 ft. ramp. Viewing a full collection in 10 minutes was so much better, than waiting in line for two hours to view a 10-minute show.

The three fashion weeks showed the films on multiple social media platforms, allowing the viewers to see them repeatedly in future. Punctuality of the shows for the three events was amazing, with simultaneous showings on 5 platforms though access to LFW had to be with a login each time on the LFW official site, while ICW 2020 and LLMIFW SS21 was fast and required no login.

Now if there are Pros, can the Cons be far behind and there were a few that may need correcting. Firstly, the camera and its close-ups were very unforgiving. So, if that badly attached zip or sari pin, placket balancing was not right, it was unnoticeable in a live show, but on camera, it appeared like an evil monster. Therefore, designers should ensure their finish is impeccable. 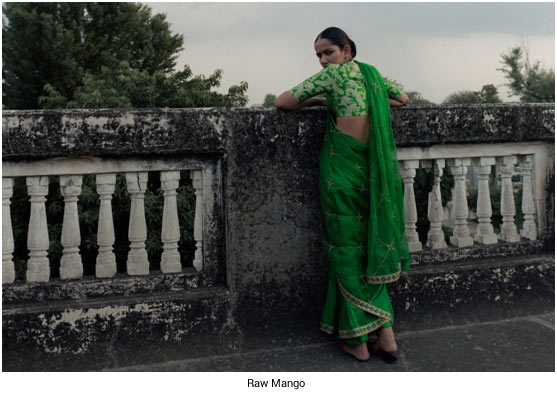 For models too, being on camera is a difficult task, if the diffusers are eliminated and the makeup is not perfect, then those bags under the eyes could look like pillows and that tiny white head on the nose may resemble a molehill. 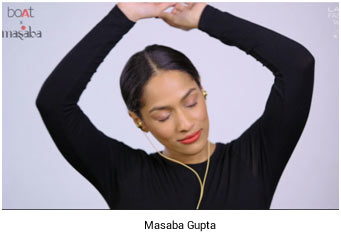 The choreographers, who called all the shots for a live ramp show earlier, in a fashion film, may have to play second fiddle to the directors of the film.  For the designers too, the twirl and swirl of the skirt that should have been shown could get chopped on the editing table. For models too it was a lean season, as just a hand full or even just a couple were used for a film, since fast changing of clothes was not important.

Internet hiccups were not often and it was fortunate that a major power outage did not take place, in which case it could be the end of a fashion week. Glitches at times on the LFW site prevented access to some of the segments.

One thought on “New Era of Digital Phygital Fashion Weeks”