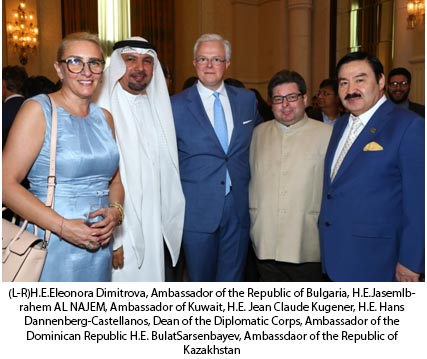 The Embassy in New Delhi, of the Grand Duchy of Luxembourg celebrated its National Day on the 23 June, 2019, with a grand reception at the Leela Palace Hotel in New Delhi. This day is the official birthday of His Royal Highness the Grand Duke of Luxembourg. The Ambassador, H.E.Jean Claude Kugener and his charming  wife Mrs Pascale Kugener-Barbier Saint Hilaire welcomed the many luminaries who had joined in the celebration in the grand Ballroom of the Leela Palace. The celebratory sparkling wine, served at the occasion was, very appropriately, by a 99 year-old brand, which is ‘Made in Luxembourg‘, Bernard-Massard.

In his welcome address, the Ambassador, H.E. Jean Claude Kugener said, “This is indeed an auspicious occasion, as we are touching to the end of the year celebrating the 70th anniversary of the establishment of the diplomatic relations between the Grand Duchy of Luxembourg and the Republic of India. Over the last seven decades, Luxembourg and India have become strong partners and have built excellent political, economic, financial and cultural relations. 70 years of friendship that shape the future. Last year in June, the former Minister of External Affairs Sushma Swaraj visited Luxembourg for a very fruitful two-day visit.”

Minister of Foreign and European Affairs, Mr Jean Asselborn, was to be a part of the celebration, but could not travel due to health reasons. The Ambassador pointed out that Luxembourg is the 16th Foreign Direct Investor in India, reflected by the great presence and diversity of Luxembourg companies represented in India, ranging from the steel and manufacturing industry to finance, satellites and crémants and wines from the Luxembourg Moselle. He mentioned that the Indian diaspora in Luxembourg has grown by 24% last year, and that a few months ago, the Consulate in Delhi became the first Luxembourg Consulate in the world in terms of Schengen visa demands.

The diplomatic community was well represented with the presence of Honorary Consuls in Mumbai and Kolkata, Ambassadors from the Dean of the Diplomatic Corps to Ambassadors from Finland, Netherlands, Belgium, Brazil, Bulgaria, Israel, Argentina, Kuwait, Latvia, Slovenia, Georgia, Kazakhstan, El Salvador, Panama, Turkmenistan, Slovakia, Croatia, Portugal, Hungary; and the High Commissioners of Malta, Cyprus, Botswana. In addition, there was the Dean of the Foreign Service Institute and the Head of the European Investment Bank in Delhi. The corporate heads at the event were the President of SAIL – Steel Authority of India , the Managing Directors of the Luxembourg Companies Paul Wurth, Amer-SilKetex, Ceratizit. The guest list included the diaspora of eminent people from Delhi, including artists, fashion designers, media heads, publishers, corporate heads and more.

The copyright for all pictures is with Mukesh Chander, TnH