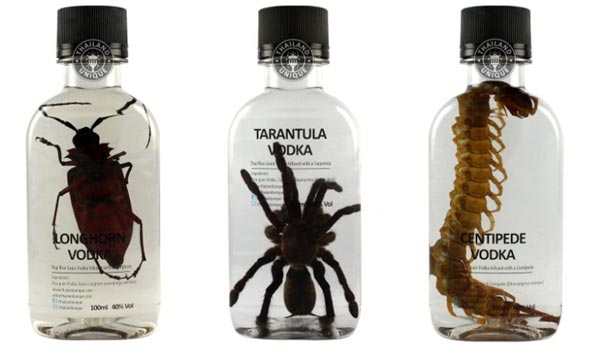 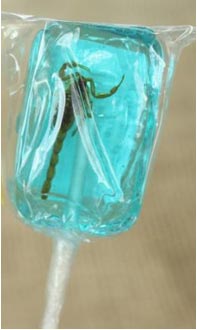 Cockroaches, crickets, mealworms, scorpions, spiders, Tarantulas and many more such creepy crawlies, one would think, ought not to be mentioned in a food column. Not true anymore. All these bugs and insects, and several more of the variety are now the chief condiment in gourmet cooking. Savored delicacies, served up with élan at some of the leading restaurants such as Noma. But, Entomophagy (the eating of insects by humans) is not a new fad. Insects and bugs have been on the menu of nearly 80% of the world’s population, since long. Within India itself, entomophagy is practiced among the tribal and ethnic populations of Arunachal Pradesh, Assam, Manipir, Nagaland, Kerala, Tamil Nadu, Madhya Pradesh, Odisha, Mysore etc. A report by Jharna Chakravorty in the ‘Journal of Biodiversity, Bioprospecting and Development’ describes in depth, the consumption patterns across the various regions of India, as well as the assorted species of insects that are consumed, the seasonal varieties, which stage of their development etc. Approximately 255 species of edible insects, including winged termites in the rainy season, insect larvae, silkworm pupae, ants etc have been identified from different parts of India. Globally, FAO has registered 1,900 edible insect species that are consumed. Around 3000 ethnic groups have been recorded to be practicing entomophagy, in Central and South America, Africa, Asia, Australia, and New Zealand.

There is much going in favor of popularizing a bug diet. Of course, there is the factor of revulsion at the mere idea of it. That is only conditioning, and can be undone. Not so long ago, the idea of eating raw fish was also revolting, but 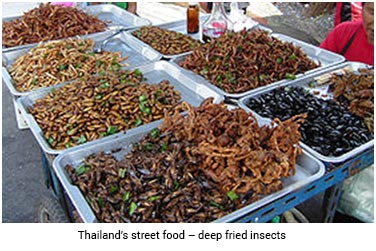 the Japanese sushi is now served and consumed with relish. The climate activists and the nutritionists are rooting for it. Most importantly, entomophagy could well be the answer to food shortage and rising cost of protein production. The heavy dependence on meat is causing environmental degradation. Edible insects are a natural source of proteins, carbohydrates, fats, minerals and vitamins. For instance, crickets have nutrients like lean protein, omega-3 fatty acids, calcium, minerals and vitamins. The queen ant eggs help in boosting the immune system. Mealworms, a staple in Netherlands, are high in protein. Scorpions too are high in protein and fatty acids. Spiders are full of protein and zinc. Many insects contain abundant stores of lysine, an amino acid deficient in the diets of many people who depend heavily on grain. 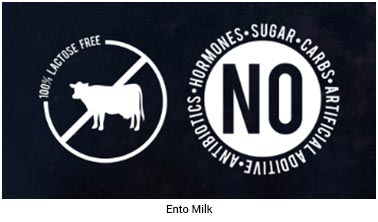 A report published by Barclays a month ago observed that the by 2030, the worth of insect protein market would be in the realm of $8 billion, up from less than $1 billion in 2019. Their analysts observed that as the global population rises, eating bugs will gain popularity as a better alternative. Well, the writing is already on the wall. Scientists are already finding alternatives to dairy, and the latest is cockroach milk. Blind tastings have given it thumbs up. Journal of the International Union of Crystallography published a study that observed that cockroach milk contains three times more calories than the equivalent mass of buffalo milk, as well as the healthier protein and amino acids. A bunch of entrepreneurs from South Africa founded EntoMilk™, which is insect milk made from Hermetia illucens, the black soldier fly. 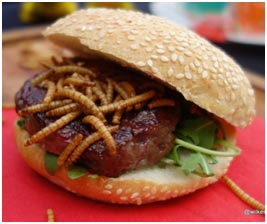 Beondegi, a popular street food in South Korea, is made with steamed silkworm pupae with few spices. In China and Thailand, deep fried crunchy scorpions and crickets are part of the street food cuisine, and are served with rice. In Netherlands, mealworms are a staple, popularly served with polenta fries. Belgian chocolates get their nutty flavor from queen ant eggs. Cambodians love their fried spider, a sweet and salty regional delicacy. In fact, fried insects of all kinds are sold as snack by street vendors. Do visit their Bugs Café in Siem Reap for the latest innovations. Ramen Nagi in Tokyo, Japan is a popular place for their insect tsukemen with crickets and mealworm-peppered noodles in a cricket, grasshopper, or silkworm powder-flavored broth. In Houston, Texas, the Mexican Chef Hugo Ortega has been serving insect 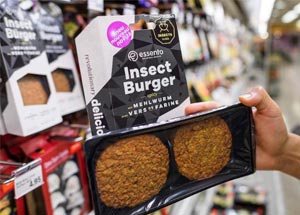 based dishes at his restaurant Xochi, since 2007. Chef René Redzepi of Noma, the famous Danish restaurant, has insects on the menu. Seven years ago in 2012, he served Crème Fraiche with live ants at a pop-up in London; and in 2015 in Japan he served shrimp sushi with live black insects. In the Fitzrovia district in central London, several restaurants serve exotic animal dishes (python, kangaroo, zebra) as well as insect dishes like bug salads and desserts with chocolate covered locusts and caramelized mealworms.

The Homo Sapien species is a survivor, quickly adapting to new requirements. However, some of us may not be able to attend these tastings. Better to be vegetarian or vegan.