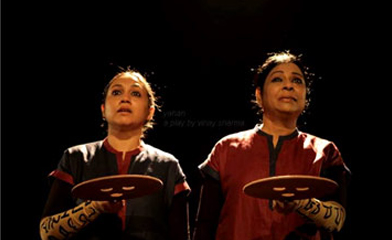 The advent of autumn is heralded with a festival frenzy, rejoicing and celebrations. Open stage theatres around Durga Pandals and Ramlilas have been part of the calendar since countless years in the yonder. Another landmark cultural activity that has been on Delhi’s calendar is the Old World Theatre Festival. The much awaited event is ready to kick off its 16th edition at India Habitat Center, from the 6th to the 15th October, 2017. A bouquet of 15 plays has been curated by Vidyun Singh, Director Programs at Habitat World, from the best of the lot from last year. Having been at the helm of IHC’s programmes department since day one in 1997, Vidyun can spot a gem.

This season has an additional significance, as it also celebrates the 20th anniversary of Rage Productions of Rajit Kapur, Shernaz Patel and Rahul Da Cunha, by staging the two plays directed by Rajiit Kapur, one their longest running play ‘Love Letters’,  and the other is their most recent productions ‘Glass Menagerie’.

The event is an initiative of Old World Culture (OWC), to promote the arts in Delhi NCR. They also showcased the Prithvi Theatre Festival and Tribute to the Legends- Music Festival in Delhi. The proceeds of their collections are used to fund the Youth Reach Apprenticeship Programme- an initiative to give children from various NGOs the opportunity to work under renowned artistes. 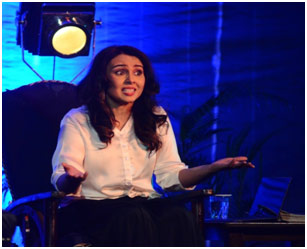 Synopsis
A successful debut Bollywood film with mega star Shah Rukh Khan, marriage with an internationally renowned film maker Shekhar Kapur, a pop album with music by Andrew Lloyd Weber….Walking the red carpet at the Oscars…What more could any young girl with stars in her eyes aspire to? In her candid, wacky, madcap biography, Suchitra Krishnamoorthi takes us on a hormone driven period of her life 5 years post marriage and divorce, fame and everything that a girl from a ‘decent’ Indian family would want. This is no longer the world of propriety that any culture would prescribe for a woman. A single mother, stuck in the quagmire of  her strict middle class moral upbringing, Suchitra hurtles, chugs and somersaults on a roller-coaster journey in a desperate bid to find security and true love. In the process rediscovering her relationship with her mother, her past and most importantly herself. Emerging with a new voice long suppressed and lost under the perplexing burdens of conforming to being ‘I’m a good girl -I am’ . 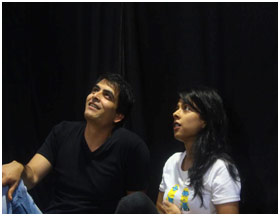 Synopsis
Chuhal is the latest  play by Writer Manav Kaul. Set in small town India, it is the story of 2 strangers, Aarti and Sudhir who meet and now have  to decide whether to be in love or not to be in love. 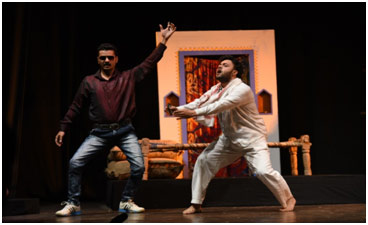 Synopsis
Set in the present day rural heartland, Lassanwala tells the tale of Kallu Bahman, a 60 year old Brahmin garlic seller whose family has been growing the same crop for three generations in the small patch of land that they own. Being a staunch Brahmin, Kallu himself refuses to eat garlic, yet continues to exclusively farm it and sell, against his son and daughter in law’s wishes. The play traces the tragic -comic events that occur in his life that shake his firm belief in the caste system that has defined a major part of his existence. The subsequent turn of events make Kallu Bahman, re –look at his life and relationships through the newfound prism of social equality. 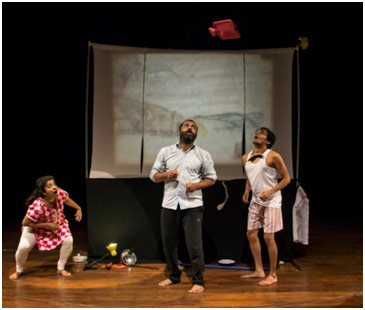 Synopsis
Life on the peaceful farm has been getting a little out of control lately with Rosamma the cow turning into an unbearable nag.  She’s irritated and upset with everyone and rants and raves all day long harassing everyone on the farm. Things take a rather drastic turn when the farmer decides to handle things his way; only to learn that you cannot export your problems because it could boomerang when you least expect it. The play invites children to join Rosamma and her fellow animals on their wonderful adventures and in a play that stretches far beyond the confines of a farm. How Cow Now Cow with a non-judgemental tone and openness allows children to interpret the performance in several ways 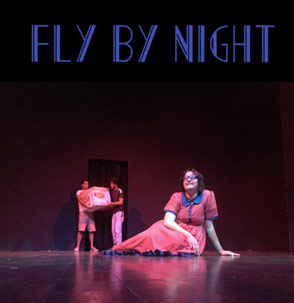 Synopsis
In a crazy overwhelming city, there is a tiny cafe run by Aunty. When life gets a little too much to handle all you have to do is go and visit her, and she will take care of the rest. With her special band of “movers” Aunty can move you out of your terrible life and place you somewhere far far away.

No Rest in the Kingdom 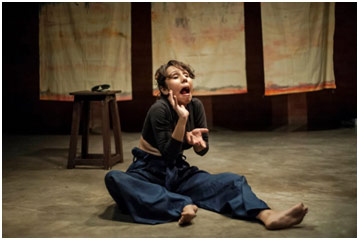 No Rest in the Kingdom, a devised, physical theatre performance, came out of the need to have a conversation about the daily misogynies we are implicit in perpetrating. A comedy with music and movement, in which the performer plays four characters – two male, one female, and one feline, NRITK draws from the lives of urban characters who speak similar languages of consumerism and technology. Young and old men and women who are themselves baffled at this ‘gender question’ often find themselves walking on thin ice, oblivious, and sometimes very aware of the dangerous biases they hold. The laughter often received is both ludicrous and uncomfortable — oftentimes knowing — that the outrageous world of inequities we inhabit is very much within us. 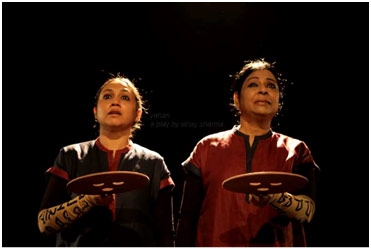 Synopsis
Two women – twin souls – begin moving in a timeless space. They await any signs that may tell them who they will be next. They find themselves entering the lives of other women in other times and places. The play witnesses the thoughts and feelings of these women through different episodes: at times surreal or meta-real, these episodes are always rooted in the human need to connect with the Other and with oneself. 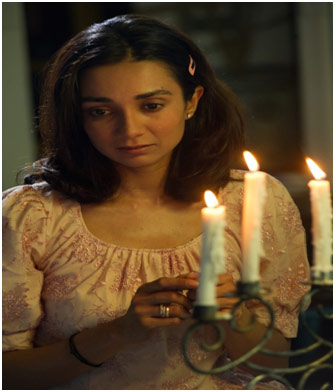 Synopsis
Abandoned by her husband, Amanda comforts herself with recollections of her earlier, more gracious life when she was pursued by ‘gentleman callers’.

Her son Tom, a poet with a job in the docks, longs for adventure and escape from his mother’s suffocating embrace, while Laura, her shy crippled daughter, has her glass menagerie and her memories. Amanda is desperate to find her daughter a husband, but when the long – awaited gentleman caller does arrive, Laura’s romantic illusions are crushed. The Glass Menagerie, Tennessee Williams’s evocation of loneliness and lost love, is one of his most powerful and moving plays. With this ‘memory play’ Tennessee Williams transports us into private worlds where desire clashes with obdurate reality, where loss supplants hope. 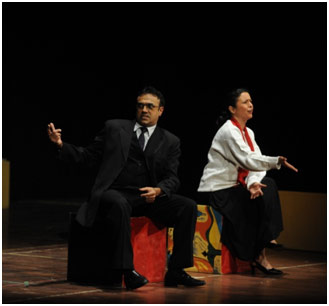 Synopsis
A heartfelt look at love, life and friendship A.R. Gurney’s internationally acclaimed stage hit is a heart warming, poignant play about two people, Andy Ladd III and Melissa Gardner, who write letters to each other over a period of fifty years. Andy is a serious, down-to-earth attorney. Melissa is a lively, free-spirited artist. But these two opposites have a definite attraction. They are childhood friends who share a lifetime of experiences through a voluminous series of letters and notes written from the age of six to sixty. Poignant, romantic and frequently funny, their correspondence follows a bittersweet path of boarding schools, marriage, children, divorce and missed opportunities. It’s the life journey of two soul mates – enacted through words both written and unsaid – who share the greatest gift of all: the gift of love. 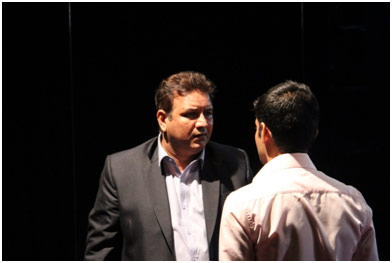 Synopsis
Set in the smoking area of a corporate building over the period of a week, a bunch of office employees discuss appraisals, politics, and relationships, all the while dealing with their stress, fears, and insecurities. The play is a comedy about the rat race, how we cope with it, and what we put our throat and lungs through in the process. 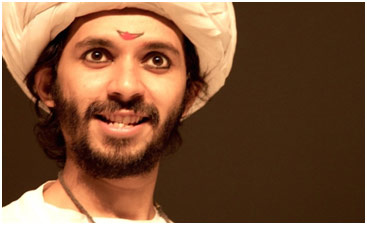 Synopsis
We cannot know whose dream this is……….Perhaps Quince dreamt of Titania and Titania imagined lovers while lovers dreamt of Puck and Puck conjured up a donkey. In dreams there are no anchors; images and sounds waft in and out of the mind. Often becoming so real, so under the skin that a dreamer could fall or fly or even remain suspended mid-air, all the while cocooned in a the warmth of a blanket. Inspired by the bizarre and extraordinary quality of a human dream, The Company Theatre presents an ensemble of 16 dancers, actors, singers and musicians, all weaving together a landscape of Shakespeare’s fantastical vision, A Midsummer Night’s Dream. Bodies and voices drift from real to unreal, moving like a daze or even a possession might move. Sometimes slowly and sometimes suddenly, the performers create and attempt to transport the audience into other realms of experience, led by song, words, music and dance. 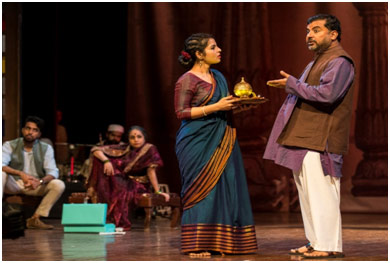 Synopsis
In a green room 4 artistes come face to face with each other. Two are yester- year divas and the other two are young heart throbs of the nation. They are all set to participate in an event celebrating 70 years of Independence in small town India. Soon a crisis begins to emerge. The male heart-throb of the nation gets banned because of an anti-national badge. The Second crisis emerges when there is a power failure. The third crisis emerges when the last option Beni Bai refuses to sing. As the event team tries to cope with these issues, we get a glimpse into the history of bans on artists and the responsibility of the artists to not stay quiet and be suppressed. As Beni challenges all orders and launches into a song she had abandoned ages ago, the trauma of a ban imposed upon her tortures her. 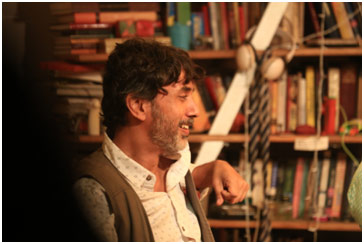 Synopsis
Rajat is a writer. His irascible outpourings have been earning him the wrath of the moral police.. His relationship with his wife Smita is the subject of his new book – a study of impermanence in relationships, of how love dies, of the desperate need for fresh beginnings in human beings. A need that is echoed in his wife Smita’s quiet longing for physical contact,in the smug comfort exhibited by their friends, Akshay and Sushmita –  happily married, with two wonderful children, a nice house, a good job, but who skirt perilously close to the thin edge of despair and loneliness and longing in the midst of their suburban tranquillity.