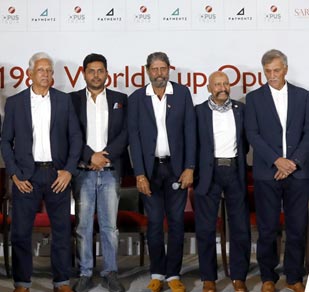 The magical moment in June 1983, when India beat West Indies by 43 runs to win the World Cup remains fresh and permanently etched in the memory of Indians. That the intervening 38 years have not diminished the euphoria was evident at The Leela, Ambience, Gurgaon, where present in force were the cricketing legends Kapil Dev, Mohinder Amarnath, Kirti Azad, Madan Lal, Yashpal Sharma, Sunil Valson, Balvinder Sandhu, Dilip Vengsarkar, Sandeep Patil, Syed Kirmani, Roger Binny and PR Man Singh, along with Sunil Gavaskar, Ravi Shastri, Krishnamachari Srikkanth joining in over a video call. 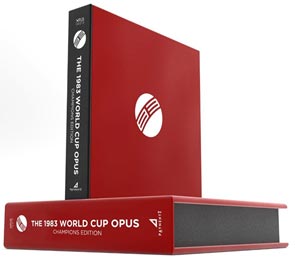 Knitted in nearly +150,000 words by some of the most renowned cricket writers like Rajdeep Sardesai, Vijay Lokpally, Ayaz Memon, R Kaushik and other, over +2000 images from archives, personal collections of the team and their families, artistic impressions from Opus’ creative team spread across some 830 pages with each measuring half a sq/meter and the book weighing over 30kgs, the 1983 World Opus is bespoke storytelling at its best.

On the occasion of the announcement, legendary cricketer Kapil Dev said, “The 1983 World Cup Opus is a larger than life book and almost an eye opener even for me! I am proud to be associated with this book that captures the momentous win by our team. I certainly hope each and every cricket lover will enjoy our journey through the 1983 World Cup Opus.”

Amit Bhagchandka, India CEO & Publishing Editor said, “The 1983 World Cup win is a memorable moment in India’s cricketing & sporting history. We are honoured to have immortalized it for cricketing enthusiasts all over the country in the form of a magnificent Opus. The unprecedented scale and format of all Opus books makes them one of a kind and we’re absolutely certain this new edition will be a collector’s dream!” 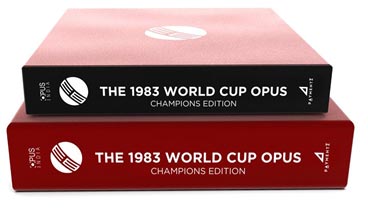 The 1983 World Cup Opus will capture the journey match-by-match from round robin stage to the semi-final and the final. The legendary Kapil Dev and his team share their anecdotes, moments of glory and the spirit that made them defeat the mighty West Indies in the finals to lift the 1983 Cricket World Cup. The book will consist archived unseen images of matches, statistics and excerpts from some of the most influential people from Cricket as well as other walks of life. Each individual will share their perceptions of this historic moment and how it impacted their own lives – the ecstasy, emotions, celebrations and the pride of being an Indian. The opus will also feature anecdotes from 100+ most prominent Indians from the field of sports, business, arts, entertainment and politics.

The 1983 World Cup Opus will be released later in the year. The book can be pre-booked on the website of Opus.

India – The Sacred Pushkar 2017 festival to