The Porsche 911 has been the quintessential sports car for decades and its near 60 year existence has been nothing short of a fairytale along with our obsession for this rear-engined sports car. The 911 from Porsche is its most famous model but also steeped in history. The 911’s iconic design which it still carries today in its basic form was designed by Butzi Porsche, son of Ferry Porsche. The distinctive rear haunches and the headlamps is something which cemented Porsche in the automotive world.

The 911 is a very important car but in 2021, the 911 is not the only car that Porsche makes- far from it. The Cayenne and Macan SUVs are the ones which fill up the coffers and the Boxster is a more affordable sports car. The 911 has changed its priorities but the fact that it is growing stronger in its 50 year plus reign is testimony to its brand image.

That said, we will not give it any leeway in terms of assessing its modern day position in the Porsche hierarchy. The new 911 is codenamed 992 and is an all new generation being bigger, wider and more luxurious. That may not sit well with Porsche purists but the new 911 is more of a luxury sports car. The Carrera S starts the 911 experience being a sports coupe while the Turbo, GT range unleashes a more dynamic character.

To my eyes, the 911 Carrera S in this particular yellow colour is a stunner while being unashamed about showing its curves. Also look at the way those sensuous lines taper into the rear along with the trademark haunches- design touches which are all pure 911. That said, the new 911 is considerably larger than its predecessor and actually massive when compared to the first iteration. However, it is still one of the most lithe sports coupe in its class. 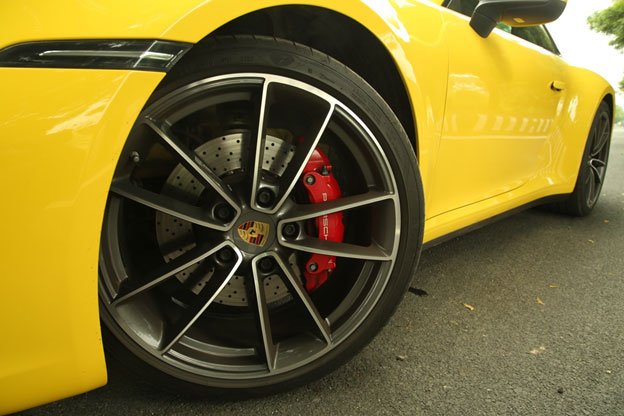 A fact I learnt when I took it for a drive in the cramped and traffic heavy streets of Delhi is that the 911 did not feel massive and can just about squeeze into the gaps. What is astounding is the use-ability. This is not some track diva which will throw tantrums as its automatic gearbox is smooth while the car did not scrape its underside even once. We feel it does justice to the ‘every day sports car’ phrase, if there ever can be one. 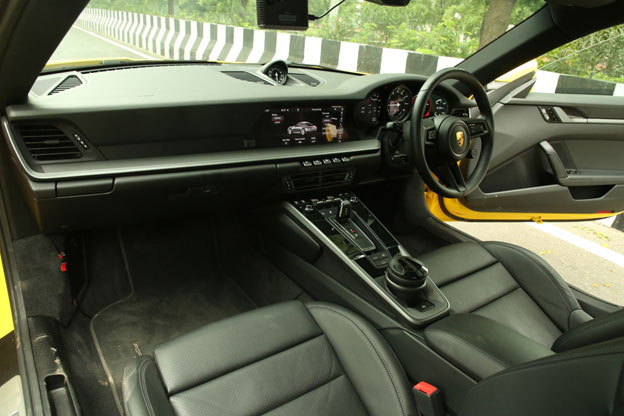 The interior is beautifully finished while the design is somber but executed with utmost perfection. There is leather and high quality bits all over while the classic Porsche dial set-up has a tinge of futuristic appeal with part digital dials added in. The center console has a mass of buttons but the haptic style touch screen feedback is brilliant in its clarity too. The Sport Chrono pack also has a lovely stopwatch mounted on the dashboard, which we rather fancied!

I can go on but I would rather talk about how the 911 drives. A clear indication of its driver focused upbringing is the fact that the rotary dial gets a direct access to drive modes. Its 3.0-litre turbocharged engine at the rear puts out 450hp and 530Nm. 0-100kph is just 3.7secs while the top-speed is well above 308kmph. However, those numbers would not describe the raw and visceral feel that the 911 exudes from its driving experience. It is not just about going fast but also drowning the driver in a myriad of sensations. The steering is brilliant in transmitting feedback along with its sharp handling which keeps the driver in focus- especially with the tail happy 911 Carrera S! 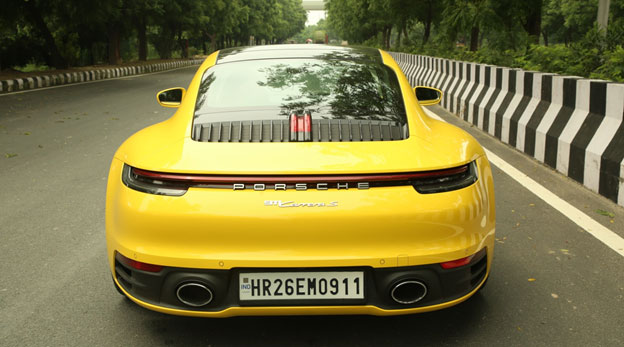 It also sounds terrific and emits a close reinterpretation of the classic Porsche soundtrack- something which its turbo-chargers have not yet corrupted. The 911 is a committed driver’s choice and needs to be respected along with taking time to explore its limits. In this world of instant gratification, the 911 driving experience peels of layers as and when you explore its potential more.

In other words, the new 992 911 is still a proper Porsche 911 but only a bit more luxurious and bigger. It still displays all the qualities which any 911 of yesteryear did. Priced at Rs 1.8 crore- without options, the 992 911 is a multi-talented sports car which continues to reward its driver like it did nearly 60 years ago. Some things never change!