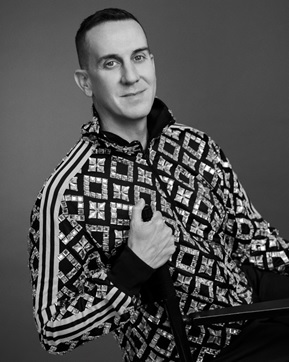 In 2003, adidas and American fashion designer Jeremy Scott first came together at a time when designer sportswear collaborations were virtually unheard of — establishing what would go on to become one of pop-culture’s most talked about creative partnerships. In the years following, adidas Originals by Jeremy Scott amassed a cult fan base as the unparalleled designer continuously pushed the boundaries of fashion and sportswear with his playfully avant-garde, tongue-in-cheek, takes on a number of the brand’s classic archival looks while creating new icons for the brand.

Today, adidas Originals and Jeremy Scott have joined forces once again to reignite their iconic partnership. Reprising his role as creative collaborator, Jeremy Scott is set to bring his inimitable lens to an ongoing series of projects over the coming seasons, each time reimagining adidas’ suite of apparel, footwear, and accessories in quintessentially playful fashion.

“Partnering again with Adidas feels like a homecoming and I’m thrilled to be home!” said Jeremy Scott.

Marking the beginning of a new era for one of sportswear’s most iconic collaborations, the first iteration of the new adidas Originals by Jeremy Scott partnership arrives in Fall 2021.

About Jeremy Scott:
Jeremy Scott is the ‘The People’s Designer’ and pop icon known for disrupting the fashion world, creating signatures out of pop, camp, fearlessness and incisive humor. He debuted his namesake label in 1997 and was promptly nominated for Best Young Designer by the Council of Fashion Designers of America (CFDA). The first to create a designer sneaker collection with Adidas, Scott pioneered the designer collaboration; with campaigns starring Katy Perry and Nicki Minaj. Scott has become a wardrobe and red-carpet staple for celebrities. In 2013, he was named the Creative Director of Moschino and has successfully reestablished the Italian luxury brand as one of today’s most prominent fashion houses with runway shows and highly revered designs and collaborations that continues to be a staple in pop-culture.

USA – Lavazza as Official Coffee of the