It is not easy for designers to score at fashion weeks with a great collection season after season. At the FDCI’s Amazon India Fashion Week Spring-Summer 2018, held at the NSCI Grounds in New Delhi, the designers were a mixed bunch. Some got it right for the season, while others were not quite there and yet others created collections that only they could figure out.

THEY GOT IT RIGHT 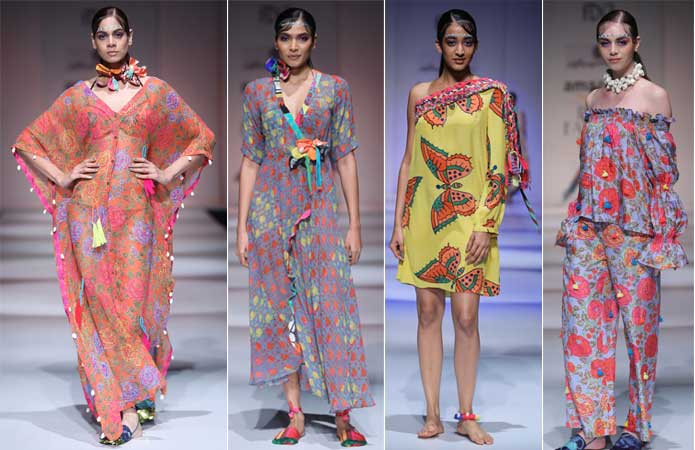 Talk about summer and Anupamaa Dayal’s name is the first to pop up. So it was little wonder her “Jalpari” collection makes it to the hit list. Gossamer and light fabrics like chiffon and Chanderi in sorbet colours of lilac, lavender and sunset hues were replete with strong summer vibes. Inspired by the beauty of the Sunderbans this vibrant relaxed line worked on all fronts. 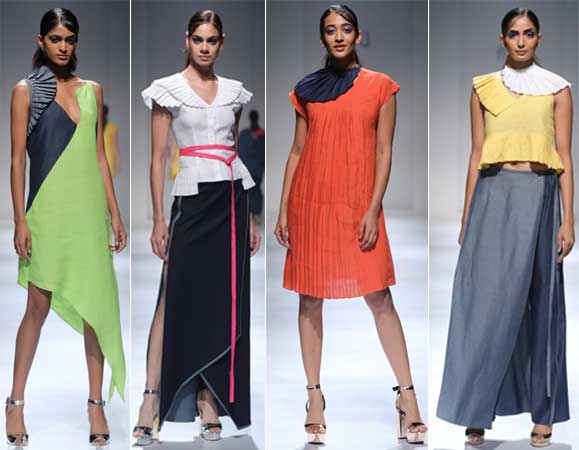 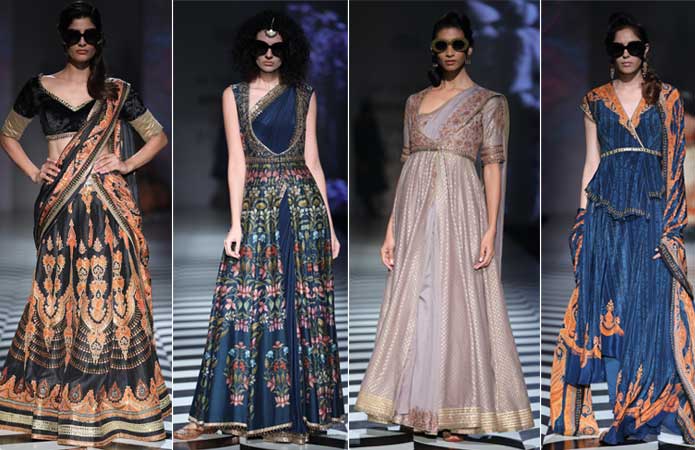 25 years of glitz and glamour from the Valaya studios culminated in a grand offering comprising three great bridal collections. “Gulistan” had the signature prints and lush floral embellishments. Valaya’s love for “Jamawar” appeared in paisleys and the tribute to his roots in “Punjab” was a regal line inspired by the clothes of the Maharajas of Kapurthala. Here was a dazzling bouquet for women who long for opulent royalty in their clothes. 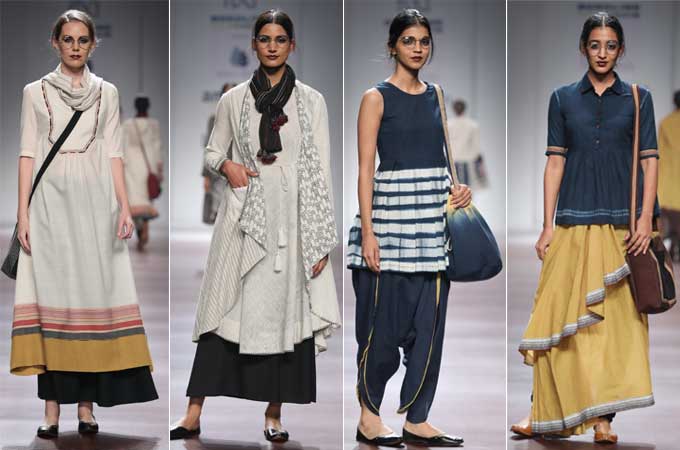 Paying homage to the swadeshi movement is a trend in India. Anju Modi gave it her personal touch, tweaking the look with Khadi in summer hues of indigo and sun yellow for the ‘Swadeshi Collection”. The striped, checked; slubbed yarns and the hint of a faded feel added to the mood of the collection. But it was the mix of silhouettes in a fashionable fusion format that will make the garments Spring/Summer 2018 favourites. 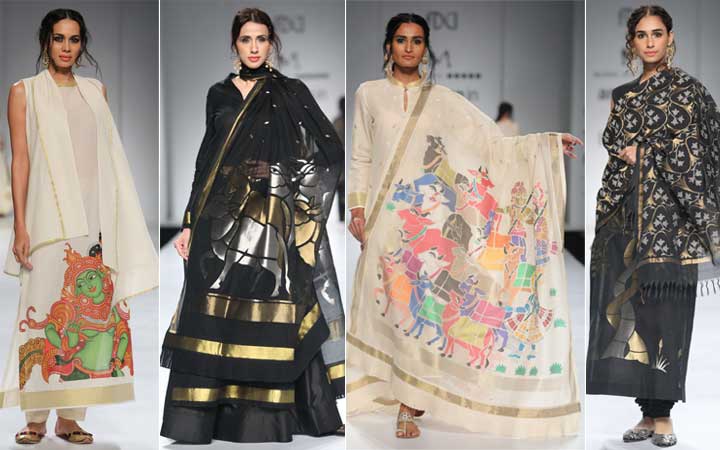 Immersing her creativity totally into textiles Madhu Jain’s offering of 3 Master weaves required long years of research. Starting with the inspiration of frescos and murals of the temple paintings from Kerala’s Gururvayur temple, Madhu moved to her latest Bamboo silk collection, which was an elegant unfussy minimal look where the weaves did all the talking. The final Royal Venkatagiri line from Andhra Pradesh in Jamdaani weave had tribal motifs that were truly showstopping in their grandeur. 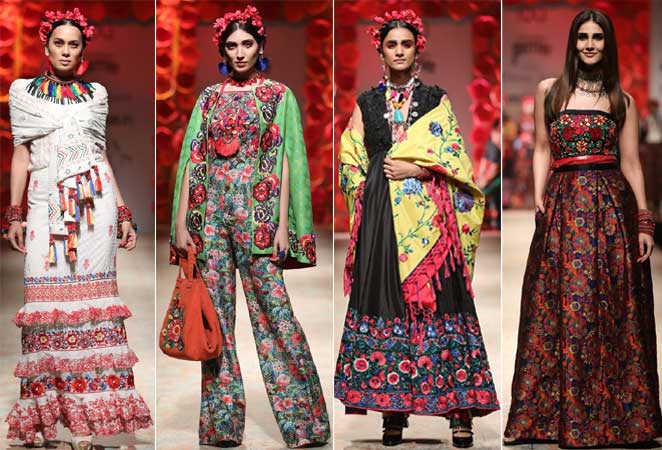 Presenting an ode to Frida Kahlo is a popular inspiration that could be at times difficult to achieve. But Payal Jain celebrating her 25 years in the fashion business created a stunning collection with colourful Mexican elements, organic fabrics, vibrant colours, weaves, prints and checks that came together seamlessly in a visually arresting line of ensembles called “Forbidden Love”. It was a collection that will create as much excitement on the fashion charts as the sartorial style of Kahlo did. 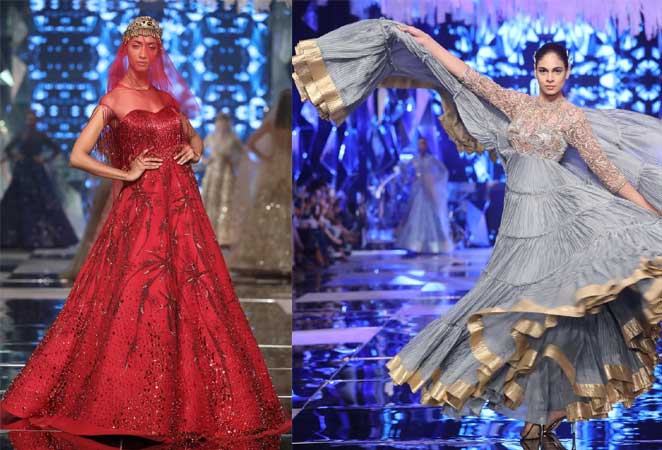 Celebrating three decades in the fashion business Suneet Varma’s Grand Finale collection – “Garden of Eden” was a perfect dazzler for the 30th FDCI’s India Fashion Week. Not many can create extreme glamour like Suneet can and he pulled out all creative stops and offered Indian women a collection that will turn them into tantalising, stunningly attired modern day Eves.

NEARLY GOT IT RIGHT 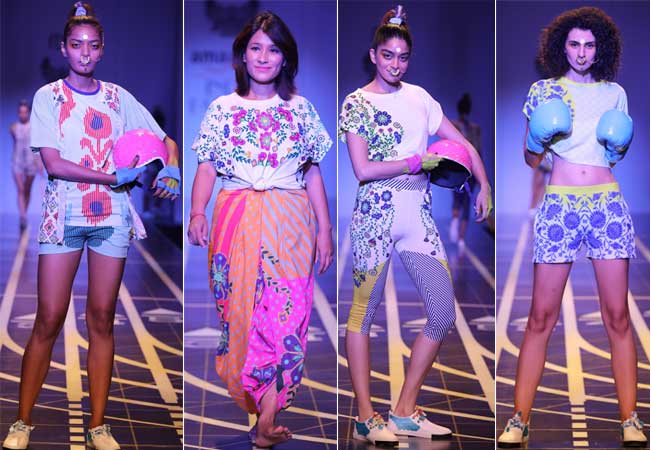 Creating a trend of wearing a sari with a pair of jeans was one of Nida Mahmood’s fashion contributions. Her quirky prints inspired by Bollywood stars made her shows the best attended. For Spring/Summer 2018 her collection with Deivee by Milind Soman an Active Lifestyle Brand had its heart in the right place. The USP was, using 100 per cent recycled plastic bottles for the garments and adding a ‘Running Sari’ on the ramp. Besides that traditional inspirations like ikat and Mughal patterns, were interesting. But it lacked the Nida Mahmood punch when it came to something out of the ordinary. That edge was missing. It had good wearability but not many innovations in constructions. 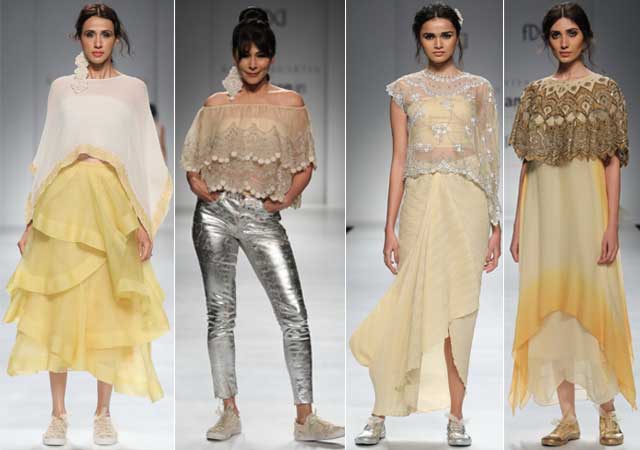 Being a regular at a fashion week season after season can be quite taxing on the curative juices to present outstanding collections. Kavita Bhartia has been a loyal fashion week participant ever since her store Ogaan opened in 1989, which encouraged her to start showing her collections in 2000. Her collection “Diary of Flowers” was a pretty, feminine line of lace, tulle, embroidery and fluid silhouettes. The colour story was delicate pastels with hints of blue and the look was summery. It was a B+ collection that could have gone to A with some interesting trendy additions for the coming season. 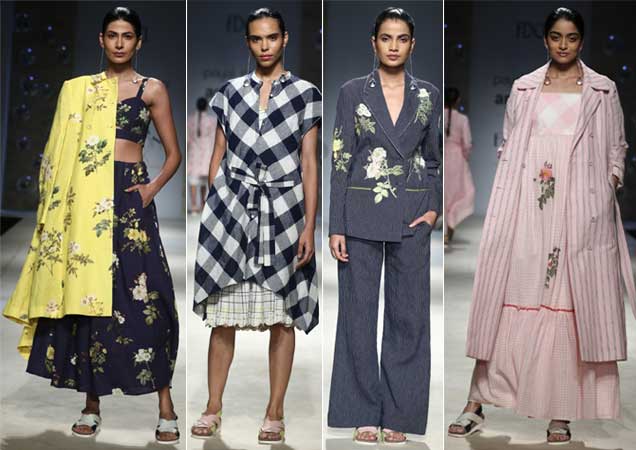 Here is a designer who has been quite consistent in presenting interesting collections since 2012. With her husband ace designer Rajesh Pratap Singh as her mentor, Payal Pratap cannot go too wrong. Her Spring/Summer 2018 collection “Here Comes the Sun” was a colourful study in vibrant hues. It was an organic, botanical, story with Khadi and handloom linens that created the right mood for the season. While the pastels, florals and micro checks worked well, the black/white giant checks were a damper on the collection. 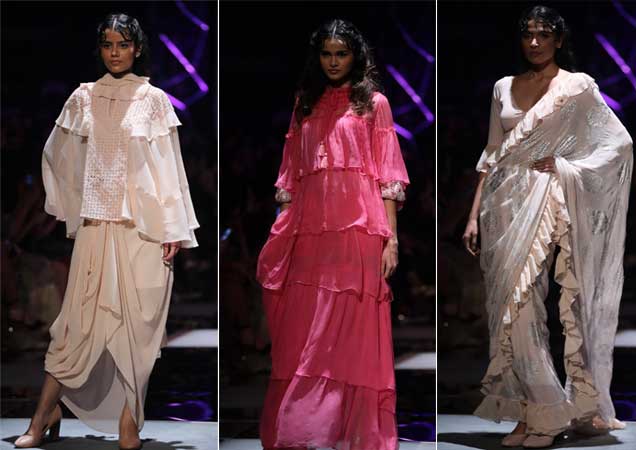 Labelled the “Goddess of Oomph” and “India’s Donna Karan”, Rina Dhaka who created a sensation in the ‘80’s with stores racing to grab her collections, has been a little off-colour for the past few seasons when her creativity has lacked that punch. Though to be fair to her, the Couture Week 2017 collection made a very strong fashion statement inspired by the beauty of jewellery in silver and gold with some amazing construction. But for Spring/Summer 2018 Rina, lost her path. Her inspirations moved from gypsy to nomadic influences and though she rightly stated it was a cocktail, it was definitely not a heady one. As part of the Grand Finale show of the AIFW SS 2018 Rina’s look did not match the creativity of the other five designers as there was no continuity in her story between the two shows at the event nor fashion directions. 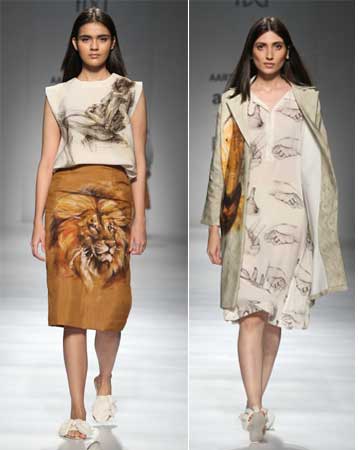 When the first showing is a smash hit it is difficult to keep up the momentum. At Lakmé Fashion Week Winter/Festive 2012 Aarti Vijay Gupta’s “I Love Ma Doodle Book” catapulted her to instant stardom. What followed were great collections each season when Aarti displayed her digital print prowess with different paintings and drawings. She had a loyal follower even in Fern Mallis, former Senior Vice President of Fashion IMG New York from 2001 to 2010 who only wore her creations in India and abroad. But for AIFW Spring/Summer 2018 Aarti’s collection called “Line” had the relaxed shapes and breezy fabrics but the prints story did not have the creativity or the pizzazz that could make the viewers sit up. A giant lion’s head on a skirt, pencilled hands on a shift, scribbles on a sari teamed with images of morose faces on the blouse – where has Aarti lost her way on the creative path? 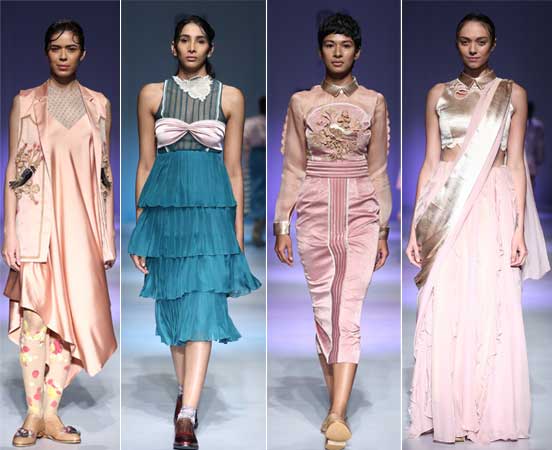 The inspiration is complex – a poem by George MacDonald called ‘The Girl That Lost Things’. So for her label Frou-Frou Archana Rao presented a collection that had lost a lot of things as far as a link or a connecting thread was concerned. Archana was the Gen Next designer at Lakmé Fashion Week Summer/Resort 2012 and created quite a stir in the fashion world. But for her latest collection aimed at the Spring/Summer 2018 season random pieces popped up with an assortment of embellishments that jumped from one concept to another. The story neither revolved around fabric, colour, silhouette or concept but turned whimsy into a virtue for the garments, which were each left without a peg to hang onto. 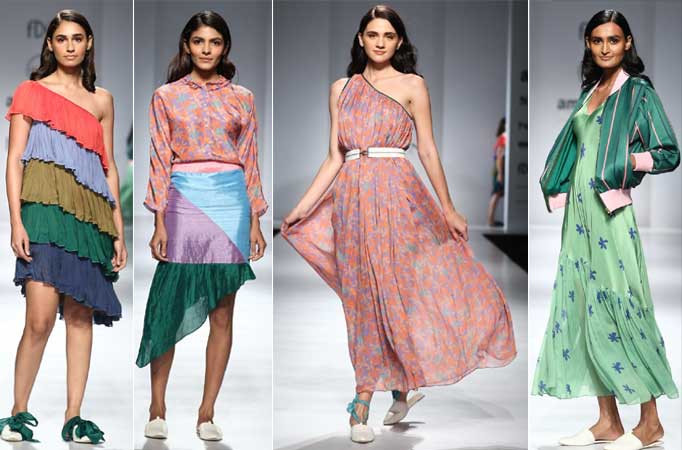 A ready-to-wear collection needs a strong theme to capture the attention of a buyer and not just stray pieces that are forced on the ramp. The Guapa collection designer Reby Kumar admitted that the collection was created while listening to the song on loop ‘Don’t Worry Be Happy’. A very positive state of mind to be in but wonder how the buyers and the retailers will feel? The designer admits she let her mind wander but it seems it went in directions that were totally off the track. Creatively there was a lot to be desired when the collection identity took a sharp turn off the ramp. Wish there was the same synergy in the garments as there was in the footwear. 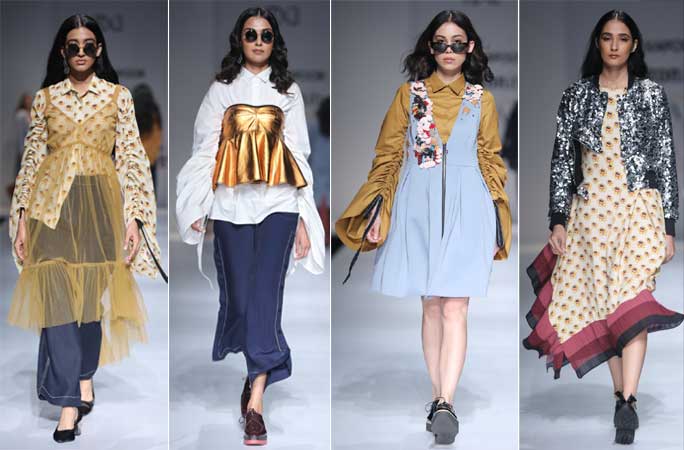 At Gen Next Lakmé Fashion Week Winter/Festive 2014 Dhruv Kapoor created quite a stir with his collection. He then turned into the Young Turk to look out for at various fashion weeks, having impressive creative credentials that include a specialisation in women’s wear from Milan. But is Dhruv pushing his creativity out of the ballpark and trying to be too edgy and experimental? His Spring/Summer 2018 looks were a mish-mash that would appeal to a buyer with incoherent expectations. Do go off beat and push the creative limits but random pieces without a purpose makes no sense. Called “The New Mindset” the collection supposedly had tribal patchwork elements from Geisha costumes but were functional and aimed at bright young things stated the press note. Here was a collection, which was more an exercise in quirky styling than in creating a compact clever collection. 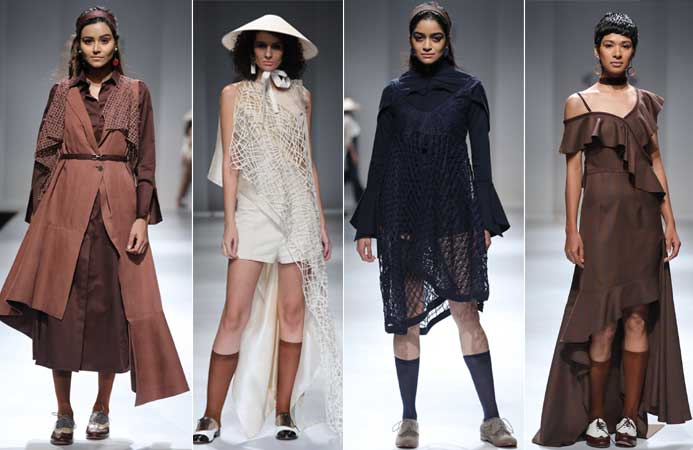 The Soltee label by Sulakshna Monga has been a constant at AIFW for several seasons. But the designer has not been able to zero in on a fashion identity to call her own. Her Spring/ Summer 2018 line called “The New Modernist” was in autumn tones of beige, ink blue, brown, grey and ivory with a marked oriental touch provided by the hats. The collection note was a great piece of pretty prose, while the ensembles meandered from one silhouette to another thereby creating a visual puzzle for the viewers. Calf high socks and lace-up brogues were a constant but they did nothing to lift the collection from the first step of the fashion ladder.