PR-NEWSWIRE
Search
Fashion
January 14, 2017January 19, 2017 admin 0 Comment
Fashion weeks are trade shows where designers present the trends two seasons ahead for stores and their buyers. Eventually, the line will appear in the show windows at the start of the actual season. FDCI’s India Fashion Week is the only body in India that follows this global pattern. The Amazon India Fashion Week Spring/Summer 2017 happened in October 2016. It’s yet peak of winter here in North India, and a tad early to start planning the summer wardrobe. For those who did not sit through the entire shows, and those that don’t attend fashion weeks and those that do, here is a relook. We bring you our report compiled by Meher Castelino, the one fashion journalist who can tell wheat from chaff and say it like it is.

At every fashion week there are collections that make you sit up and admire the designers’ creativity and the fashion offering for the coming season and there are others who present collections that leave a lot to be desired since something does not quite gel making the presentation at times confused and quite unwearable. At Amazon India Fashion Week Spring/Summer 2017 some designers showered their collections with creativity, while the others may have done some work hard but the end result was quite disappointing.

They Made an Impact 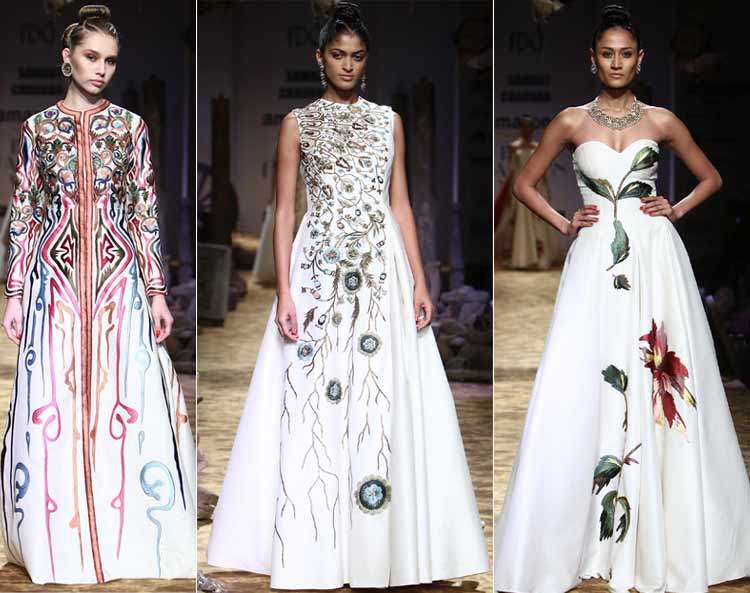 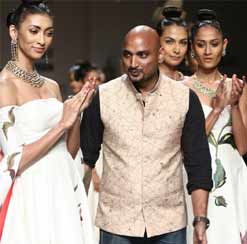 Here is a designer who delivers consistently. Samant Chauhan has learnt to merge Indian textile weaves with dramatic Red Carpet silhouettes and the result is a stunning collection predominantly in white with great embellishments and innovative styling. For several seasons he has been loyal to Bhagalpur textiles giving them pride of place on the ramp and for his Spring/Summer 2017 look, he offered the fabrics with a mix of Chanderi and the end offering was grand gowns that were visions of beauty with selectively used embroidery. There was a hint of Indian touches but the overall look of the ensembles was ideal for western wear lovers. 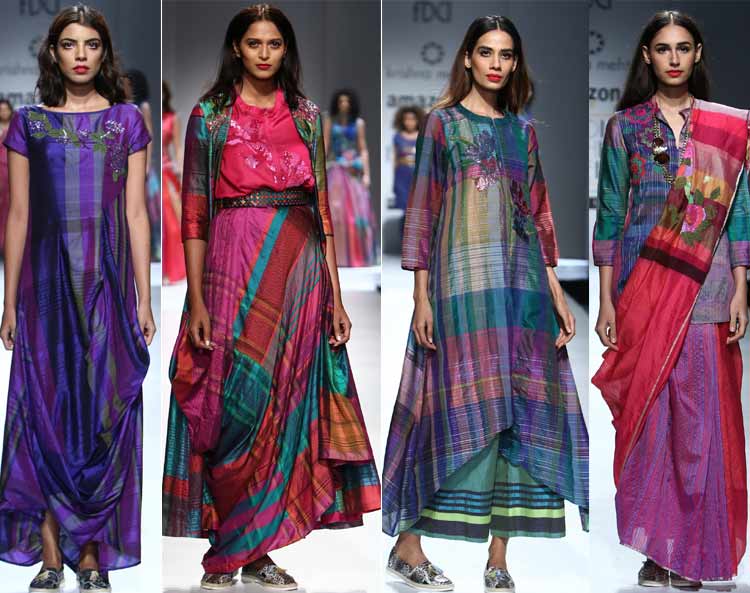 It isn’t easy to be in the business of fashion for nearly three decades and still present collections that are eye-catching wearable and a tribute to Indian textiles. Krishna Mehta’s very colourful ode to Maheshwari fabrics called “Curious Alice” was a delicious riot of hues in checks and stripes but turned into contemporary silhouettes that will delight women of all shapes, sizes and ages. The layering of the garments was perfect with the bright hues of the fabrics and the easy, breezy, fluid forms making them ideal for the steamy summer heat 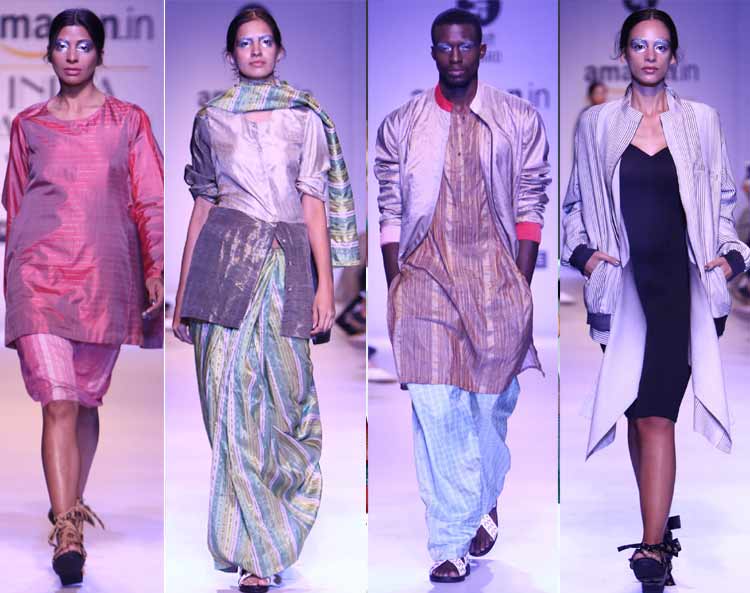 Gaurav Jai Gupta’s base is very solid. It’s fabrics that are a clever blend of yarns and mixed intelligently with stainless steel, which has given his label “Akaaro” so much publicity and recognition that he was featured on the cover of a bi-monthly national magazine and hailed as Fashion’s New Star who is making waves. When he first started in 2010 there was an element of hesitancy in his silhouettes though his fabric base was always amazing. But for his Spring/Summer 2017 collection called “Pingala” Gaurav pulled out all stops as far as shapes were concerned and displayed a daring line of ensembles that could turn into collector’s items and a wearer’s delight.

PANKAJ AND NIDHI – Masters Of Design 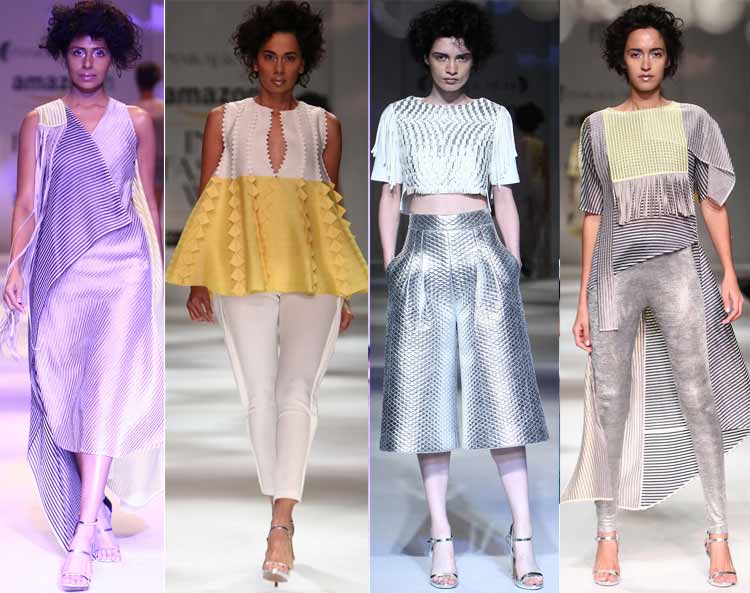 When it comes to presenting fashion week collections the designing duo, Pankaj and Nidhi have a very high voltage creative record. Their collections are strong in digital prints, fabric texturing and manipulation, laser cutting, as well as embellishments of a very high standard. Their Amazon India Fashion Week Spring/Summer 2017 line was an exuberant display of cocktail and formal wear called “Chromatique”, which featured Bling of the highest order but presented in a refined manner. With a strong fashion story, the look was innovative in construction and forms with a wide range of options some with laser cutting, metallics and fringing that gave the collection a feminine, feisty look. 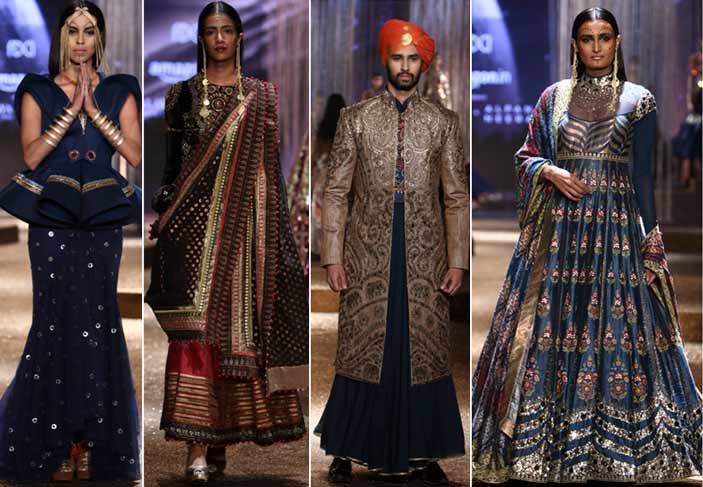 When teacher and pupils, guru and shishyas come together for the Grand Finale of a Fashion Week there is bound to be fashionable fireworks on the ramp. That is exactly what happened at Amazon India Fashion Week Spring/Summer 2017 when Guru JJ Valaya and Shishyas Alpana and Neeraj showcased their collections called “India Modern Festive”. The trio displayed dual lines that perfectly complemented each other but at the same time were diverse in treatment. Valaya’s traditional impact was evident on the gorgeous bridal wear, which was balanced perfectly by the contemporary wedding wear from Alpana and Neeraj. Stunning lehengas, cholis and dupattas worked their magic on the ramp from Valaya, while Alpana and Neeraj unleashed some amazing tiered, ruffled, creations that dazzled the audience and gave an innovative direction to bridal couture.

AMIT AGGARWAL – It Does Fit In 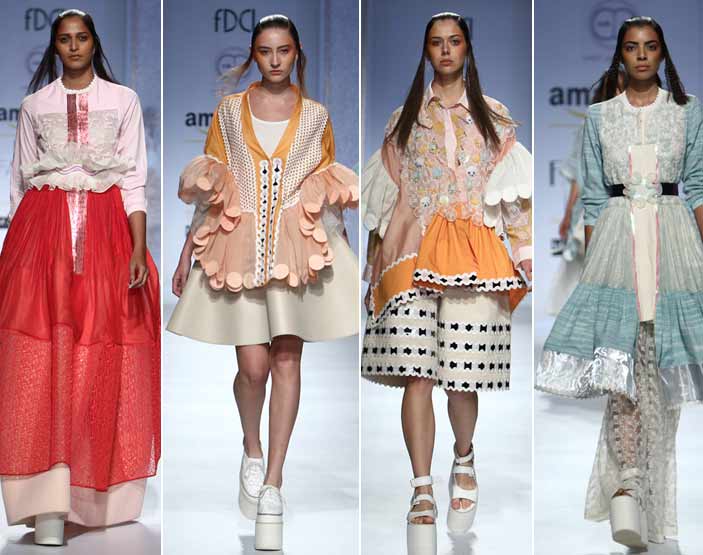 When it comes to Red Carpet Glamour, not many can beat Amit Aggarwal who is a master of his craft. His gowns with amazing construction have dazzled on and off the catwalk making the wearer the cynosure of all eyes. But when he attempts his AM-IT prét label “IT” very often just doesn’t make sense. The outlandish silhouettes straight out of an Alice in Wonderland set for his Spring/Summer 2017 collection called “ICloud” may appeal to wearers whose heads are in the stratosphere. His creativity appeared muddled and confused though his thoughts were noble when it came to using recycled material and handwoven Indian textiles to create a sustainable fashion statement. But mark sheet for wearability and commercial viability, Amit may not score even a single digit, which is a pity, since clothes need to sell and not just be displayed on the ramp or in a museum. 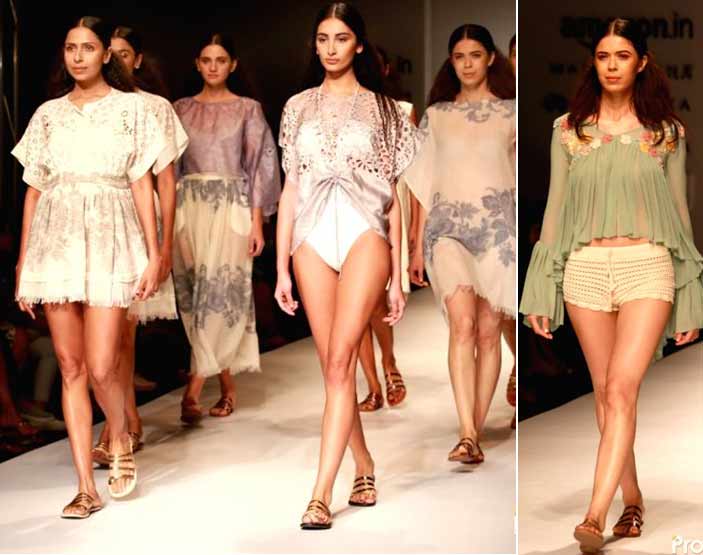 This popular designer from the South has quite a loyal following or she would not be in business for so many decades. Yet Rehane’s collection for Spring/Summer 2017 did indeed seem like a hurried mish-mash of minis and maxis, which did not have the designer’s stamp nor did them reveal any creative skills. Here was a collection with loads of ‘de ja vou’ where one could say it was mainly “have seen it, done it, and worn it”. Uninspiring silhouettes and random splashes of embellishments revealed that the designing link or thread was missing in the garments as casual pieces came down the ramp.

HEMANT AND NANDITA – Edit For an Encore 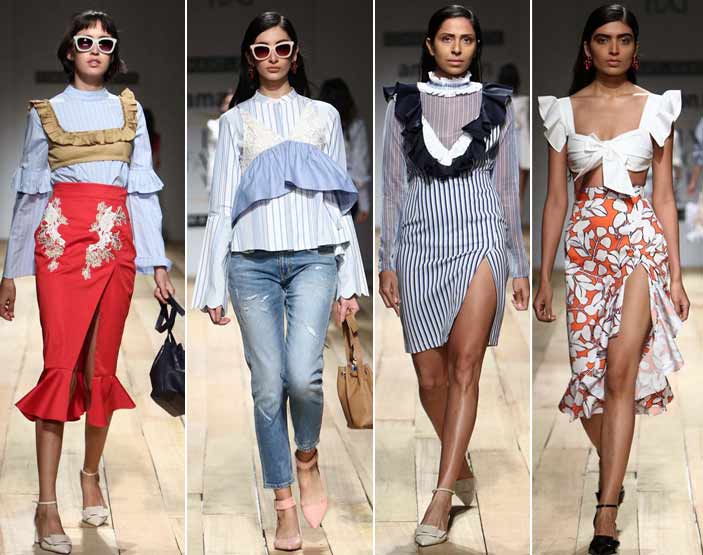 This designing duo is a seasoned pair that has brought great ideas to fashion week catwalks, yet for the coming season the collection was a mix of prints, colours and silhouettes that did not do justice to their brand. What were Hemant and Nandita projecting? Was it a line of separates that can be mixed and matched by the buyers in varying styles? In that case the thought process was quite garbled. Maybe one can blame it on the styling but what appeared on the ramp was a mix of disjointed pieces for their collection called “Romance Reinvented” that would need to be either reworked or eliminated. The Victorian influences, floral embroidery, modern prints, summer hues, layered jackets, dresses, shirts, shorts, playsuits were all there. But maybe the pair could have considered some ruthless editing of the collection so that only the finest ensembles were on display to project their creativity. 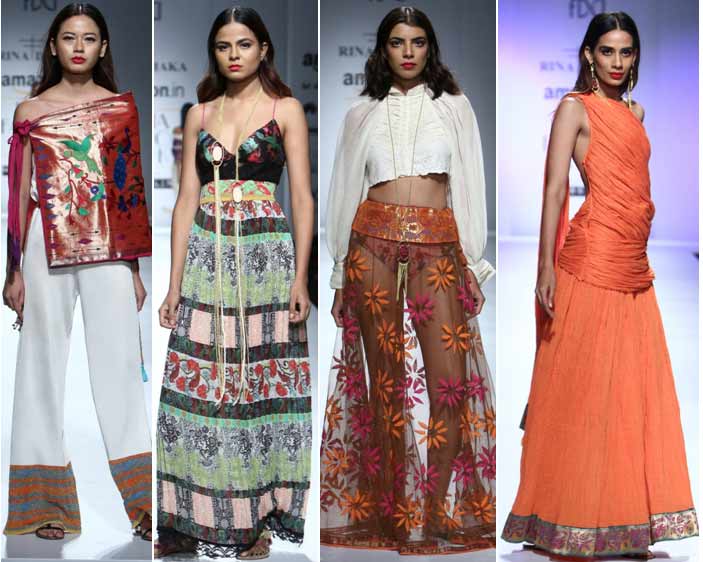 One of the pioneers of the Indian fashion business, Rina Dhaka’s name has been around for nearly three decades. At one time named the “Donna Karan of India”, Rina Dhaka’s fame was at its peak in the 90’s when every collection from her studio was the “Talk of the Town”. However her latest collection for Spring/Summer 2017 left a lot to be desired. There was the noble addition of Paithani for some of the garments but the overall look of the show was quite unsure and lacked a strong signature line from Rina. The fabric story wavered, and so did the colour palette; while the silhouettes appeared as vague. The “grand” final black off-shoulder dress with multi-coloured floral embroidery appeared quite alien to the collection when it should have been the piece-de-resistance of the show. Maybe Rina needs to create a fashion story that moves smoothly down the ramp instead of giving repeated jolts to the viewers.