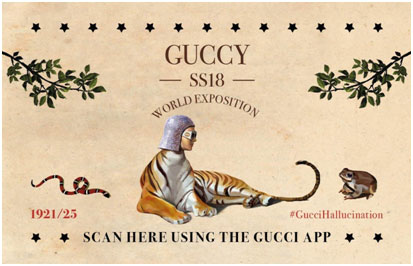 We are utterly enchanted by Spanish artist Ignassi Monreal, who has seamlessly brought the focus of the young on the works of renowned Masters from the renaissance era, blending new-age technology with fashion and art. The new campaign for Gucci’s Spring/Summer 2018 Collection features original artworks by the young artist Monreal. He has been nurtured by Gucci since he was discovered through the #guccigram project in 2015, and recently produced the Gift Giving book for the holiday season in December, as well as the new spring/summer 2018 advertising campaign for the House.

It is the artwork for this, in Monreal’s distinctive, signature surreal style that is at the heart of Gucci’s new digital activation project. This follows the success of a similar digital campaign that ran over the holiday period.Stores around the world will feature windows dedicated to promoting this digital initiative. Within the window display, a large screen will show an animated digital illustration, as if it were an artwork in a gallery. On most windows, this impression is reinforced by the presence of a bench facing the screen on which coloured velvet-covered mannequins will sit, as if looking at the art hung on a gallery wall.

Asticker on the store window will enable those who have downloaded the Gucci App to access a microsite by scanning it. The site will feature downloadable wallpaper and access to a catalogue of more of Monreal’s Illustrations 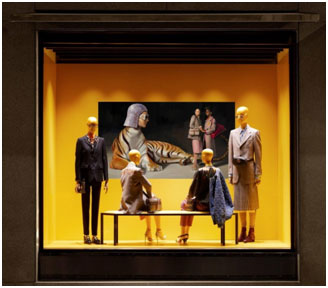 and shoppable Gucci products. The sticker artwork takes inspiration from vintage tickets for exhibitions, cinemas and museums, suggesting that here is a key to gaining admission to an entertaining and illuminating experience. All the elements on the sticker are taken from Monreal’s illustrations for the spring summer 2018 advertising campaign, including several creatures from the Gucci Garden.

In addition to the window stickers, the activating artwork will also be printed as actual tickets that will be given to customers in 52 stores when they make a purchase. Furthermore, these designated stores will also have virtual reality devices for customers to use. These will have three different 360-degree panoramas that have been created using Monreal’s campaign illustrations, and customers can thus immerse themselves in his dreamlike Gucci universe by putting on the headsets. 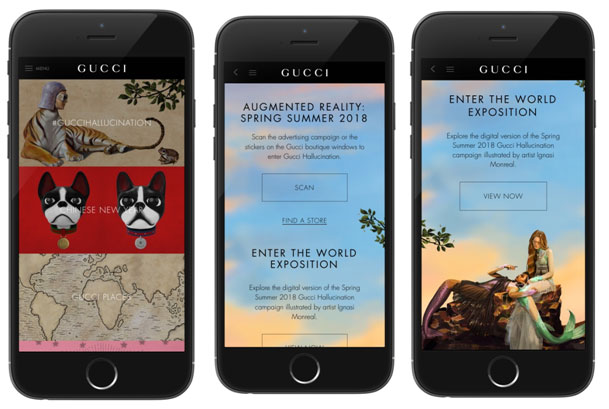 Away from the stores, 15 of the 20 illustrations from the spring/summer campaign that will feature as advertisements in magazines and newspapers will be scannable using the Gucci App. The App will animate the page in 3D with special augmented reality effects.