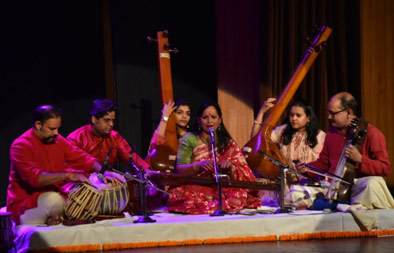 Asavari in collaboration with Living Music Society for Arts presented and evening of dance and music on  Wednesday, 13 November 2019,at Stein Auditorium, India Habitat Centre, New Delhi. The theme of the program “Samyog – Viyog”, was expressed through classical music and dance by Padamshri Shovana Narayan (Kathak) and Vidushi Sunanda Sharma (Classical vocal). Dr. Lavlin Thadani was the Sutradhar of the event. Chief Guest Shri Pavan Varma (a former Indian Foreign Service officer and ex-Member of Parliament) inaugurated the event.

Padamshri Shovana Narayan (Kathak) said, “As an artiste, it was wonderful to see the enthusiastic response and reception to our evening Samyog Viyog. I felt that the theme touched a chord in everyone’s hearts.”Vidushi Sunanda Sharma (Classical vocal) said, “Music is the language of soul. ‘Rasa’ is a beautiful source to express different emotions of human beings. After living and depicting ‘Rasraj – Shringar Ras’ through my singing and kathak dance in the concert, I would look forward to exploring and living other ‘Rasas’ in my near future concerts!!”