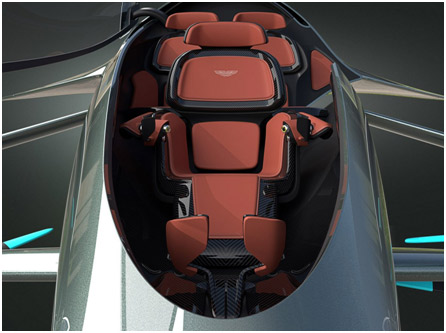 Sounds like a slice out of some fictional action movie about flying cars that take off from the 98th floor, but alas, it is not true – yet. The British automobile brand Aston Martin, better known for its luxury sports car, is aiming to ease commute convenience with its latest private airborne transport, Volante Vision Concept aircraft. Volante Vision was launched on 16th July, 2018, at the Farnborough Air Show, reportedly, alongside the Boeing’s hypersonic aircraft concept. Aston Martin has attempted an aircraft for the first time with Volante, which is ideally suited for use in crowded urban spaces. It is a three-seater, self-piloting, hybrid-electric aircraft that is capable of vertical take-off and landing (VTOL), with three propellers.

Aston Martin CEO Andy Palmer reportedly said that the Volante Vision was conceived as the solution to growing congestion and pollution in cities and towns. Of course, coming from Aston Martin, it will be the ultimate luxury mobility solution, with the brands signature design and engineering. Marek Reichman, Aston Martin chief creative officer is reported to have said, “We have a unique chance to create a luxury concept aircraft that will represent the ultimate fusion of art and technology.

Well, what use is a stretch limo or a super powered luxury car if it is stuck alongside a jalopy in the same traffic? But then, we may be looking at skies dotted with flying cars, taking pollution to new heights.