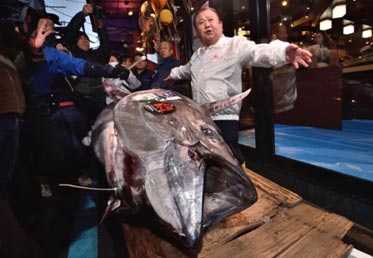 Another record was set at the Tokyo’s Toyosu fish market, with a Bluefin tuna auction for a whopping ¥193.2 million ($1.8 million). As reported by NHK, this is the second highest price on record. The tuna in the spotlight weighed 276-kg and was caught by a vessel operating out of Oma, Aomori Prefecture. Not surprisingly, the successful bid was put up by the Tokyo based Kiyomura Corp., which operates the Sushizanmai sushi chain.The high prices are quite typical for the first auction of the year, and are not really so much about quality or size. Rather, the buzz is all publicity and setting the buzz for the rest of the year.

Kiyoshi Kimura, Kiyomura President, was quoted to have said, “I am even more happy as this was the first auction in Reiwa.” This super expensive tuna will be served at Sushizanmai chain’s outlet in Tsukuji, the former location of the famed fish market. Seventy two wild Bluefin tuna were put up for auction this year. Due to short supply, the bidding for yellow tail and bonito fish from Toyama Prefecture also soared. 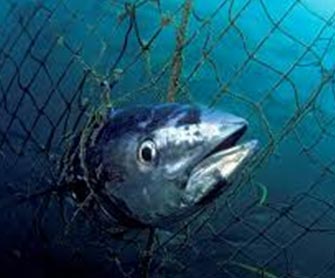 Last year, after the fish market moved to Toyosu, the same auction set another record where the record-holding Bluefin bid of ¥333.6 million was set, where 59 wild Bluefin came in for the auction.

The environmentalists are alarmed at the over fishing and depletion of the Pacific Bluefin stocks, putting it on the endangered species list. Japan is the largest consumer, nearly half of the entire catch. Surprisingly, until 1960, the Japanese did not like meat of the Bluefin, and the Americans used it for cat food. But subsequently, the opening of the sushi bars across America, developed the popularity of the taste for the prime meat of the Bluefin’s belly. Within a decade, the Japanese too developed the taste for it. Now Japanese, American and Canadian fisherman are fishing for the Bluefin, leading to a 2000% increase in fishing of all three species of Bluefin tuna in the western Atlantic. The attempts to curtail this has been upturned by fishing interests in Japan, New Zealand, the United States, and Mediterranean countries, among others.