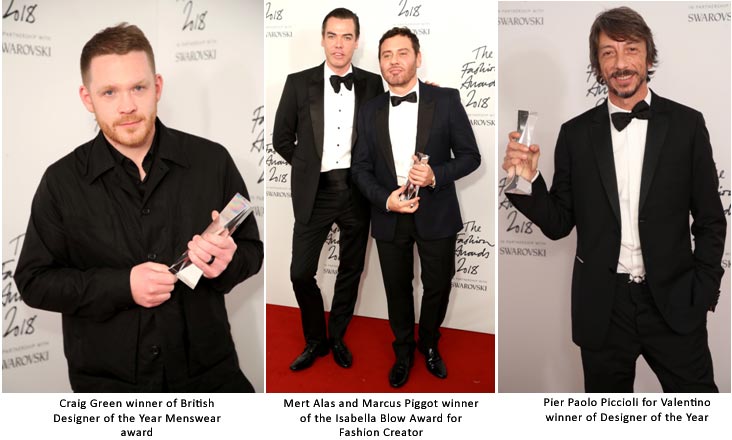 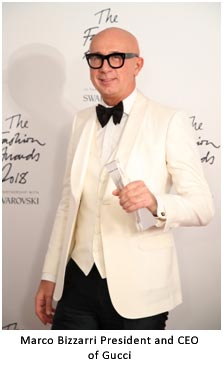 The fashionable and the glamorous in London were spotted swishing up the long red carpet of the steps leading up to the majestic Royal Albert Hall, for The British Fashion Council Awards 2018 in partnership with Swarovski, on 10 December 2018. British actor Jack Whitehall, who is also a writer and comedian, and Alek Wek, the South-Sudanese British model and activist, hosted the show. A global mix of 4000 guests, including key players from the fashion industry,as well as members of the public and fashion students to celebrate exceptional individuals whose imagination and creativity have broken new ground in fashion over the past 12 months; as well as brands and businesses that have transformed the possibilities of fashion today.

The evening celebrated fifteen awards, ten of which were voted for by a global panel of 2,000 key industry opinion formers and five Special Recognition Awards. Each winner was given a unique Swarovski crystal trophy, designed by Ghanaian-British architect Sir David Adjaye OBE. This year marks the first time The Fashion Awards 2018 in partnership with Swarovski celebrated the young global creative community with NEW WAVE: Creatives, recognising 100 of the most innovative and inspiring young creative talent from around the world. The shortlist highlights London’s position as an international epicentre and pays homage to the incredible success of both home-grown and 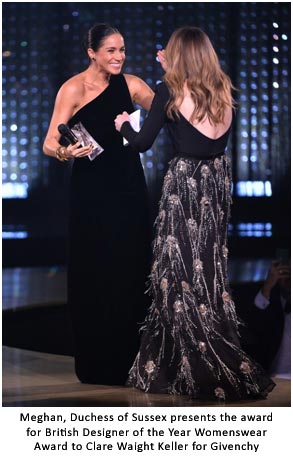 international talent; while celebrating all those who play a vital role in the industry’s cultural and creative reputation.

The Fashion Awards 2018 in partnership with Swarovski Winners –

Special Recognition Award for Innovation: Parley for the Oceans Presented by Doutzen Kroes 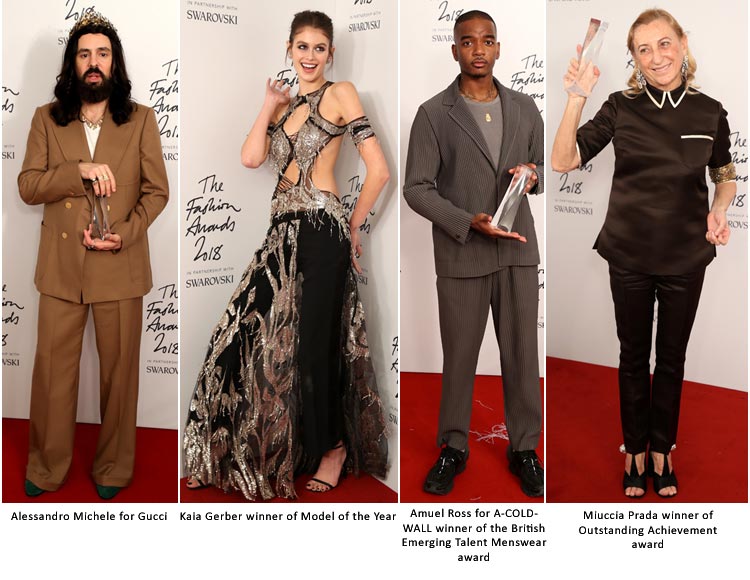 Model of the Year: Kaia Gerber Presented by Rita Ora

Designer of the Year: Pierpaolo Piccioli for Valentino Presented by Brooke Shields

On the red carpet supermodel Eva Herzigová hosted Swarovski interviews with the guests upon arrival and the evening featured two exclusive live performances from British singer-songwriter Ellie Goulding singing a rendition of Aretha Franklin’s Natural Woman and a dedicated tribute to Judy Blame and Michael Howells by Boy George for the show’s finale. Music producer Fat Tony DJ’d at the after party.

The Fashion Awards is the main fundraiser for the BFC, a not for profit organisation focused on promoting excellence in British fashion and supporting the future pipeline of creative talent. As part of their continued and generous support of The Fashion Awards 2018, Swarovski has pledged a £300,000 donation to theBFC Education Foundation in advance of this year’s event. The BFC’s work is achieved through a range of charitable initiatives which focus on education, business and mentoring schemes that support talent from school level and emerging designers to fashion start-ups and established brands. In 2017, the BFC raised over £2.2 million for its charities and business support initiatives and in the twelve months to March 2018 has allocated a further £1.1 million in grants to designer businesses to support these efforts.