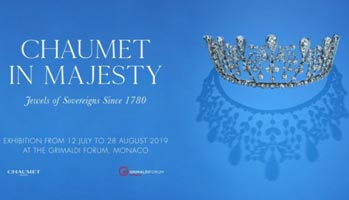 The high-end Parisian jeweler Chaumet will be holding an exhibition, Chaumet in Majesty-Jewels of Sovereigns since 1780, from 12 July to 28 August, 2019 at the Grimaldi Forum in Monaco, that will showcase its assorted tiaras in particular. After Beijing in 2017 and Tokyo in 2018, Chaumet charts a course for the most legendary of principalities to unveil rare pieces, some of which are being seen publicly for the first time: historical gems or spectacular jewel, loaned by museums, grand families or royalty. Under the patronage of His Serene Highness Prince Albert II, the exhibition is orchestrated by two curators with renowned expertise of royal courts: Stéphane Bern, a media and cultural figure, and Christophe Vachaudez, an historian specialising in jewelry. 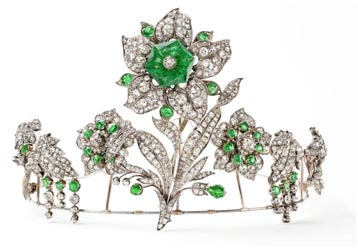 Bringing together some 250 jewelry creations, works of art and exceptional historical pieces, the exhibition takes the visitor on a voyage of rediscovery of the history of a cult jewel, the tiara, a symbol of sovereignty that has become one of radiant femininity. Initially an emblem of power assumed by Napoléon and magnified by Joséphine, the first Chaumet muse, it stands out as the centre piece of the wedding basket and the true crowning of love, passed on and transformed from generation to generation, as fashions and trends dictated. Lastly, the exhibition highlights the ongoing dialogue between jewellery and the arts, rendering the tiara a continually reinvented accessory. In tandem with the evolution of the feminine silhouette, it imparts an extraordinary allure and expresses the art de vivre of an era.