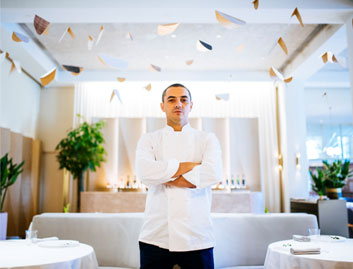 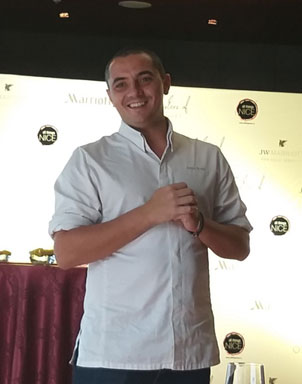 True, it is the home cooked meals served at family dinner tables that imprint the earliest happy memories around food and its flavours; and the celebrated French Chef Julien Royer, who co-owns the 2-Michelin starred modern French restaurant Odette, in Singapore re-endorsed these views at our meeting at the JW Marriott, Aerocity, New Delhi. Chef Julien and his team hosted a superlative six course French dining experience and served Odette’s signature dishes. He was on his maiden voyage to India, under the initiative ‘Masters of Marriott’ held by Marriott International Inc in association with Sommelier Nikhil Agarwal, Founder at All Things Nice.

Chef Julien shared his stories of a childhood in the countryside of France. He said, “I grew up with my grandmother, from a tender age to when I was a teenager. She always cooked for us as kids, showering her love on us through her food and through her cuisine.She showed me how much pleasure, emotion and happiness you can give to people through the food and cuisine. The restaurant is an ode to my grandmother.” Her name is Odette, and Julien names his restaurant after her.In fact, he said he earned his Michelin stars following her role model, of using the freshest, seasonal ingredients grown locally, all stirred in with pure love. 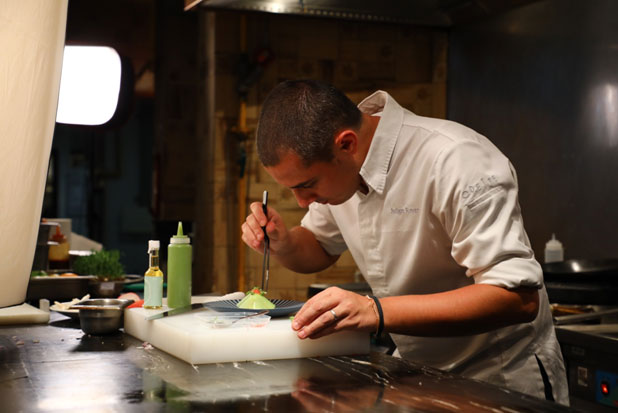 How important is emotion in cooking?

Chef Julien believes that the human factor is huge. “You can tell if a chef is in a good mood or bad mood. It affects the flavours of his cuisine.” “It is so easy to cook with love for the people that you like, when you cook at your home for your friends and family. But the challenge is we have to give the same amount of love and attention for people we don’t know.” 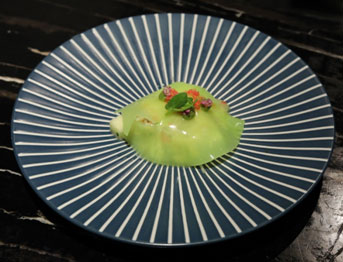 How does he overcome this challenge?
He went on to elaborate, “We try to really think about the diner as a family, close friends whom we love. In addition, we try to evolve the menu as much as we can for our guests. We keep trying new things, new products, new techniques and new recipes.”

Speaking about sourcing local ingredients, Chef Julien said, “I am trained as a French cook and that is my rule of cooking. But in Singapore, the food that we do now has opened itself to a little bit of Asian influences. Because we use products like fish and sea food from Japan, a lot of vegetables, spices, citrus from the region, ingredients from south Asia.”

I was wondering about the wasabi mayo, the Korean BBQ sauce and the Tofu sizzler in this French meal, and got my answer. 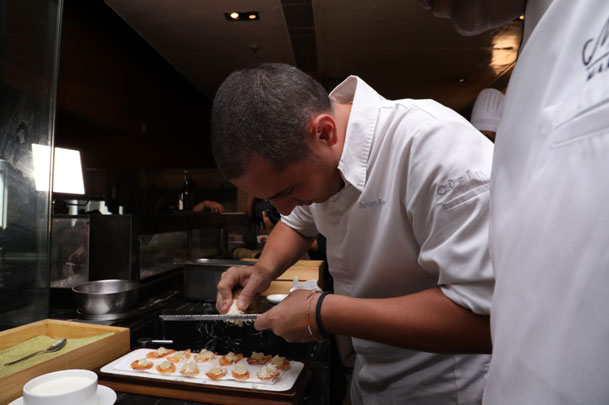 Chef Julien: Food is a universal language. It brings people together. When you ask about their favourite moment in life, everyone, whether French, Indian, Italian, Singaporean or Sri Lankan, they all say that 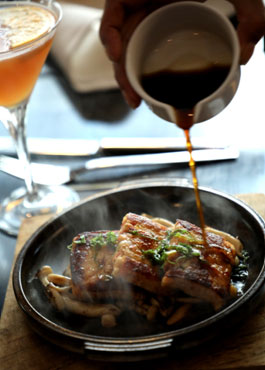 it is being with my friends and family, with nice food and a good bottle of wine It is about eating together. Culturally, the difference I see is that in Asia people share a plate, but in France every customer has a plate for himself. In terms of ingredients, the geographical location of France in the heart of Europe, with its rich soil and access to many different seas and oceans, the produce is fresh and organic and close at hand.

What do you look forward to in this your first trip to India?

Chef Julien: I am liable to learn new things in my travels. Coming to such events, working with other chefs here, helps me to know more. It is a gain of knowledge. And knowledge in cooking is like power. I discover new things, and it helps me to evolve my cooking.”

Chef Himanshu Taneja, Culinary Director, Marriott International, South Asia elaborated on the ‘Masters of Marriott’ program, where leading chefs from across the globe visit the
kitchens of JW Marriott in different cities in India, and offer a new experience. He said, “Working with such Michelin star chefs gives a good exposure to our staff and chefs. It is not always possible to send our chefs to 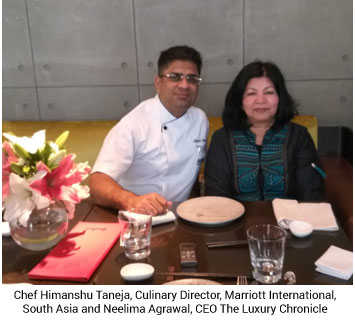 Michelin star restaurants abroad to train.” Answering to my query on which of Marriott’s many restaurants could qualify for a Michelin, he sidestepped saying that the Michelin rating has not yet come to India, and they have their own parameters. Fair enough.

Co-founded by Chef Julien Royer, Odette is a2-Michelin starred Modern French restaurant located at the iconic National Gallery Singapore. In 2017, Royer led Odette to its historic debut on the Asia’s 50 Best Restaurants 2017 list at 9″ place — the highest new entry in the history of the list.

Royer’s culinary career then took him from the French West Indies to London, where he was sous chef to Antonin Bonnet at Michelin- starred Mayfair restaurant, The Greenhouse. He moved to Singapore in 2008 to take on the role of Chef de Cuisine at JAAN at Swissotel the Stamford, Singapore. During his four-year tenure, the restaurant received numerous accolades under Royer’s leadership, including 11″ place on the Asia’s 50 Best Restaurants 2015 and 74 on the World’s 50 Best Restaurants 2015 long list.