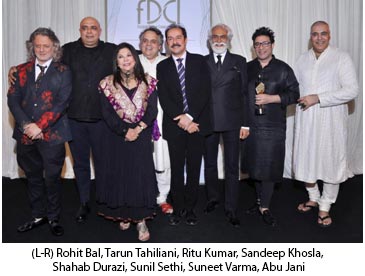 The Fashion Design Council of India commemorated its 21st year of existence with a new initiative to celebrate iconic veteran designers, the Couture Hall of Fame. Six legendry designers, Ritu Kumar, Abu Jani-Sandeep Khosla, Rohit Bal, Shahab Durazi, Suneet Varma, Tarun Tahiliani were honored with an award and inducted into the new Couture Hall of Fame, at a ceremony held on 29 July, 2019 at the Taj Palace hotel, New Delhi, the venue of the on-going India Couture Week 2019. 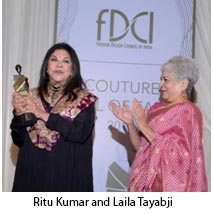 Ritu Kumar, followed by designers Abu Jani and Sandeep Khosla. They received the trophy from senior actor Jaya Bachhan. Designer Rohit Bal was felicitated by entrepreneur Kalyani Saha. The Mumbai based designer Shahab Durazi got a standing ovation from the attendees and an award from Tina Tahiliani. Niti Aayog Chairman Amitabh Kant was also present and suggested a museum to be dedicated to Indian design, as he handed over the trophy to Suneet Varma. The evening witnessed “Couture Chronicles”, a fashion showcase of the creations of 21 leading lights of Indian design. Senior journalist Bandana Tiwari, gave the final award to Tarun Tahiliani.

The trophy was designed by Sunil Sethi Design Alliance and the decor executed by Varun Bahl assisted by UAIS design team. 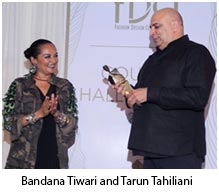 Sunil Sethi, FDCI President said, “My journey at the Fashion Design Council of India started in 2008 and haute couture is the ultimate destination even as our aim is to modernise the blueprint for Indian iconography, reviving forgotten motifs and crafts with insightful techniques. The FDCI Couture Hall of Fame is a coveted recognition for those, who have tirelessly worked towards taking India global. The FDCI Board of Governors has also decided to curate the India Fashion Awards, that will unveil this year.”