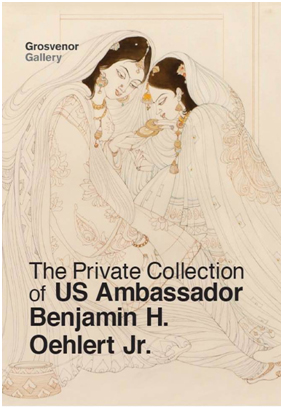 The 10th edition of the international art fair Art Dubai is set to roll out from 14 – 19 March, 2016. Visit the booth M3 where Grosvenor Gallery will be showing works by two of the most important and influential South Asian artists of the 20th century; AbdurRahmanChughtai (1897-1975) and Syed Sadequain (1930-1987).

Important paintings, prints and works on paper by AbdurRahmanChughtai come from the collection of ex-US Ambassador to Pakistan, Benjamin H. Oehlert Jr. will be displayed publically for the first time in almost 50 years. The Ambassador purchased the works directly from the artist during his time in Lahore between 1967 and 1969. The pieces were displayed in the embassy buildings, and are some of the finest examples of the artist’s work from that period. After he returned to the USA he became Vice President of Coca-Cola, and the works remained in his private collection.

Chughtai’s works typically portray prominent figures from Hindu and Islamic history as well as sentimental and poetic scenes in which the characters typically personify places and moods.  During his career he developed a style that combined the precise nature of Mughal and Persian miniatures with the delicacy of Japanese ink paintings, which characterised both his paintings and his etchings. Paintings inspired by the work of poets such as Iqbal, Ghalib and Omar Khayyam form part of this significant collection.

Syed Sadequain received widespread critical acclaim during his lifetime for his expressive works, inspired by calligraphy and natural forms such as cacti. The works displayed were produced during the artist’s years in Paris (1961-1967), widely considered to be the peak of his career as an artist. 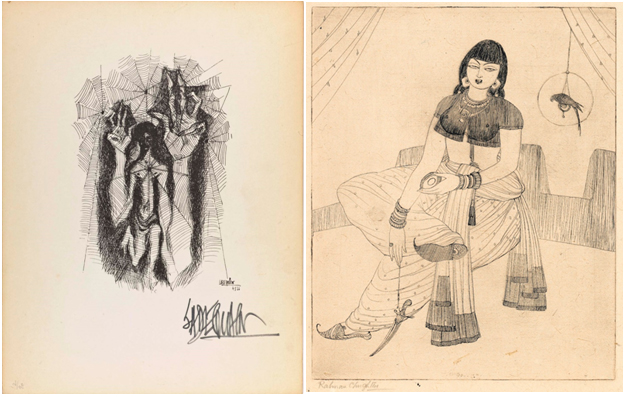 One of the most significant events of his time in Paris was his illustration Albert Camus’ novel L’Étranger,one of the most important French novels of the 20th century. He produced 22 colour lithographs illustrating the story of Meursault, an ill-fated Algerian who is imprisoned after shooting a man on a beach. Grosvenor Gallery will be exhibiting the entire suite of lithographs, as well as a rare original works and preparatory sketches.

These will be shown alongside rare published drawings and large scale oil paintings from late on in Sadequain’s ‘Paris period’, which are far more expressionist than his earlier works, and which are thought to have been created for an exhibition in Rouen in 1967, alas never held due to the artist’s return to Pakistan that year. The paintings depict characteristic Parisian scenes influenced by the work of École de Paris artists such as Pierre Soulages, Serge Poliakoff, Jean-Michel Atlan. Sadequain’s paintings mark a departure to a more fluid and abstract style and show the artistic development of the artist over the years and come from the private collection of an important Parisian family.