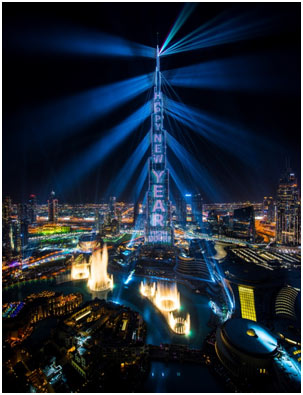 When it comes to over-the-top, larger than life spectacles, UAE takes the lead. Be it shopping festivals or malls or exotic architecture, the scale is always humungous. The New Year revelers who had specially flown into Dubai for the occasion were captivated by Emaar’s ‘Light Up 2018’, a dazzling spectacle to usher in 2018. Downtown Dubai celebration hosted more than a million visitors from across the world and reached an estimated 2.5 billion people worldwide through live television broadcast and social media live-streams.

The celebrations were notched up several scales to highlight the achievements of the UAE and mark the Year of Zayed to commemorate the 100th anniversary of the birth of the late Sheikh Zayed bin Sultan Al Nahyan. The mesmerising laser, light and musical fountain show not only had a spellbinding effect on spectators, but Emaar’s ‘Light Up 2018’ also clinched the Guinness World Records title for the ‘largest light and sound show on a single building,’ staged on Burj Khalifa, the global icon. The record beats that set in Hong Kong in 2013 on the ICC Building which was over an area of 46,641.52 sq metres. ‘Light Up 2018’ on Burj Khalifa, by contrast, spanned an impressive surface area of 109,252 sq metres (about 27 acres, the size of about 20 football fields) – more than double that of the earlier record set. 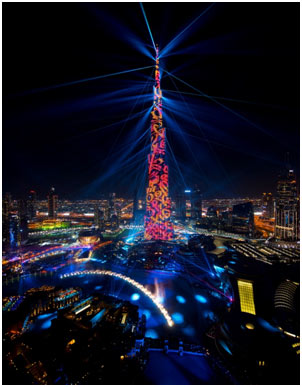 New Year’s Eve in Downtown Dubai was about much more than the record-breaking event that was one component of the show, as brilliant laser beams in multiple hues enveloped the night sky over Downtown Dubai, complementing the new LED panel displays of Burj Khalifa with over 1.1 million pixels, and the musical water performance of The Dubai Fountain. Taking five months of constant preparation, ‘Light Up 2018’ put Dubai and the UAE in the global spotlight through its futuristic approach to New Year’s Eve gala celebrations. Environmentally-friendly, safe and spectacular, it served as a testament to the ‘can do’ ability of the nation with an international team collaborating to create a never-attempted-before feat.

A highlight of the show was the visual tribute to the founding father of the UAE, the late Sheikh Zayed bin Sultan Al Nahyan, to coincide with the nation commemorating 2018 as the ‘Year of Zayed’ to mark the 100th anniversary of his birth.

Mohamed Alabbar, Chairman of Emaar Properties, said: “The UAE celebrates positivity and hope. The nation and its leadership inspire the world through breakthrough achievements while creating opportunities for people and businesses to thrive. The ‘Light Up 2018’ spectacle is our tribute to the nation, celebrating its accomplishments, and putting the UAE on the global map as a true hub where inspiring minds meet and connect.

“His Highness Sheikh Mohammed bin Rashid Al Maktoum, UAE Vice President & Prime Minister and Ruler of Dubai, urges us to push our boundaries and to be innovative and creative. With ‘Light Up 2018,’ we have set a new template for New Year’s Eve galas, where the focus is on leveraging the newest technologies to present a spectacle that is novel and breathtaking.”

On the spectacular event, Talal Omar, Country Manager, GUINNESS WORLD RECORDS, said: “As the global authority on record-breaking we have seen fascinating things from all over the world. However, we are always keen to find out what records Emaar plan to attempt each year, and to support them as they continue to push the boundaries of technology and innovation in these attempts.” 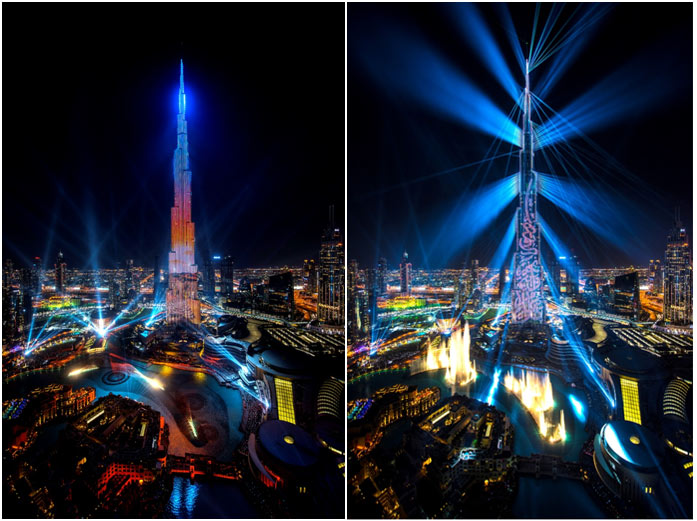 Breaking the GUINNESS WORLD RECORDS title with ‘Light Up 2018’ required a total installation of lights, beams and accessories weighing over 118.44 tonnes, and more than 28.7 km of cables – including 7.7 km of power cabling and 21 km of network and signal cabling.

The show transformed Downtown Dubai into one of the world’s brightest spots, measuring 76.3 million lumens of brightness. Carefully choreographed lasers certified as completely safe to human eyes and energy-efficient LED bulbs were rigged using 25.3 km of ropes and supported by 20 tonnes of special customised-steel mounting equipment. In all, more than 40 specially modified outdoor lasers as well as 230 high power Xenon searchlights and 280 outdoor beam moving lights were deployed, underpinned by the highest searchlight installation and highest laser installations in the world at 828 metres – the height of Burj Khalifa. More than 300 professionals worked on-site including 100 rope-access experts; collectively they travelled over one million kilometres to join the project.

A dazzling show to remember

Emaar’s ‘Light Up 2018’ kicked off with on-ground celebrations from 5pm with performances of The Dubai Fountain every 15 minutes and a live DJ keeping audiences entertained in the run up to midnight. At two minutes to the New Year, ‘Light Up 2018’ began. Following a glittering display on Burj Khalifa – with powerful laser beams and LED lights creating inspiring motifs and patterns in myriad hues flickering up and down the entire height of the tower – it was time for the countdown. In the darkness, Burj Khalifa was the hero, coming alive to the colours of the UAE flag – red, green, white and black – with the seconds remaining in 2017 ticking down on the tower’s façade.

Ushering in the New Year, the celebration continued with a tribute to the UAE and Dubai, a mark of solidarity to the friendly GCC nations, a spectacular display to mark the ‘Year of Zayed’ as well as an abstract depiction of the elements of nature. The display also featured the free-flight of a falcon and a rendering of the upcoming icon by Emaar, the Dubai Creek Tower in Dubai Creek Harbour.

Special viewing platforms were set up across Burj Park, the primary venue of the event, as well as across Downtown Dubai. For the first time, a dedicated space was curated for People with Determination in South Ridge, overlooking Burj Park that accommodated more than 100 people, offering them direct views of the celebration. The entire show was displayed on big screens in Downtown Dubai.  Live feeds of the event were telecast around the world in addition to a live Twitter feed and an online real-time feed at www.mydubainewyear.com.