On the 16th August, 2017, exactly a day after India celebrated the 70th Independence Day, the Embassy of Belgium in India launched a new logo as an ode to as many years of diplomatic relations between the two countries India and Belgium. The Ambassador of Belgium, H.E. Mr Jan Luykx explained the significance of the logo, which is a graphic of the national bird of India, the peacock. The number 70, marking the anniversary years, are held up by the feathers of the bird, which are in the colours of the Belgian flag – black, yellow, red and the colours of the Indian flag – orange, white, green. 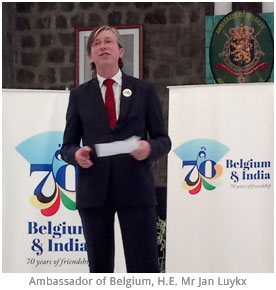 Recounting the history, which was unknown to most of us present there, the Ambassador filled in the details. The first diplomatic initiative was taken by Pandit Jawaharlal Nehru, the new Prime Minister of India, who sent V.K. Krishna Menon to Brussels in January 1947. Menon’s meeting with the Belgian Foreign Minister, Paul Henry Spaak was successful and in March 1947 the Belgian Government officially informed Mr Nehru of its decision to establish diplomatic relations with India and to open an embassy In Delhi. A chargé d’affaires was appointed in May 1947.The first ambassador, Eugène Prince de Ligne, arrived in Delhi in September 1947. He presented his credentials on September 20th – thereby becoming also the first ambassador accredited to independent India.

It is commendable that the Belgian Embassy has honoured its diplomatic association with India in such a manner. The logo will be officially in use for the entire year.