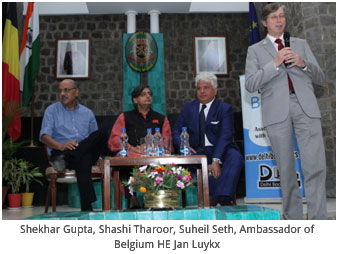 The Embassy of Belgium in New Delhi played host to the event ‘Rendezvous with Dr Shashi Tharoor’, organised by the Delhi Book Lovers (DBL) club on 2nd August, 2017. The book by Dr Shashi Tharoor, ‘An Era of Darkness: The British Empire in India’ was the backdrop to the discussions on chronicling of history, the way forward to be adopted by a nation such as India where there is no credible attempt to conserve and record historical events. The Ambassador of Belgium H.E.Mr Jan Luykx welcomed the worthy panellists on the dais, Shekhar Gupta, Suheil Seth and Shashi Tharoor, along with Ratan Kaul, the adviser to DBL.