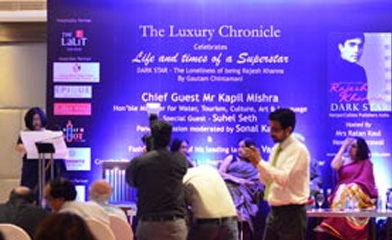 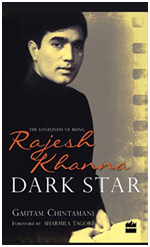 On a perfect Thursday afternoon, on 8th September, 2016 , The Luxury Chronicle hosted a panel discussion, followed by a glamorous soiree at The Lalit New Delhi, around the book ‘Dark Star – The Loneliness of Being Rajesh Khanna’ by Gautam Chintamani, published by Harper Collins.

When asked why The Luxury Chronicle chose to organize an entire event around this book on Rajesh Khanna, which was already published a year ago, I really had no answer. Would it be legit to quote the first line in the Author’s Note of Gautam’s book?  “I have heard somewhere that writers believe that they choose their books, while, in fact, it is the book that chooses the writer.” Perhaps the same rule works in our case too. The seed of the thought was sown by Ratan Kaul, who came on board as Executive Partner for the event. 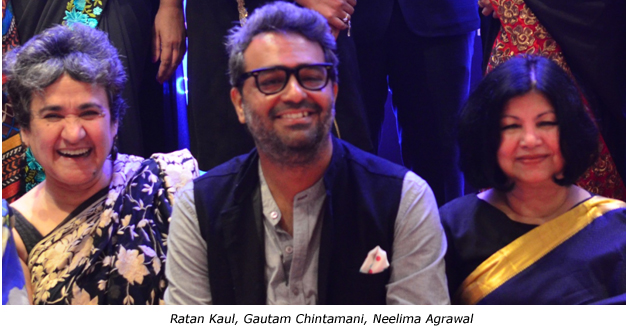 What is there to write about Rajesh Khannathat has not already been reported in the press, he being the hottest star of his times? Gautam took this into account, not leaving any detail out, and went the extra mile to connect with and talk to all those who were associated with the Superstar, or affected by his stardom, including the family. Sharmila Tagore’s foreword is very telling. The book that has already featured in Hindustan Time’s Best Ten list provides some previously known facts with additional information, and the opinions that were expressed, perhaps more freely since RK was no more.  The author has smartly steered clear of juicy gossip about the star’s personal life, mentioning the key factors where relevant. Gautam Chintamani is a true blue Cinephile. 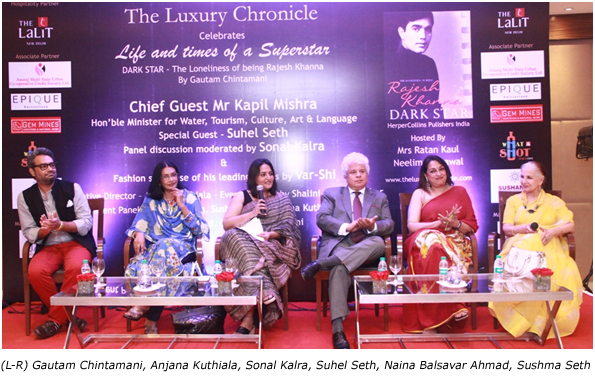 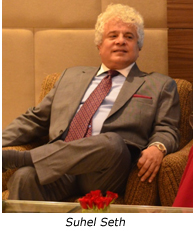 Our very accomplished panel had authors, columnists, film journalists, editors, theater artists, film stars, beauty queens and some.  Sonal Kalra, winner of the very prestigious Ramnath Goenka Award for Excellence in Film Journalism, author of the books ‘A Calmer You’, a columnist, and the National Entertainment Editor of Hindustan Times, with such impeccable credentials was the very worthy panel moderator, and steered the discussion most deftly and engagingly. Suhel Seth, popularly known for his articulate come back on most topics, has acted in more than 100 plays and some films too. Also a columnist with leading national and international publications and dailies, besides being a consultant, he brought the zing to the goings on, as only he can. Sushma Seth, the popular actor who starred with Rajesh Khanna, shared the memories of her co-star. 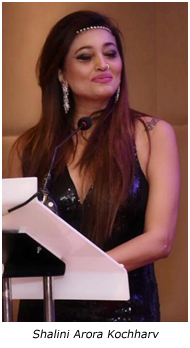 Raising the glamour bar werethe two ex-Femina Miss India. Anjana Kuthiala (1975) has gone on to become a painter of repute, who has painted most of the famous film stars, and had associated with Rajesh Khanna socially. Exuding joi de vivre, Naina Balsavar Ahmad retains the glow and radiance of one who has represented India as Miss Universe 1976 and Miss World 1976. She has since indulged in modeling, acting in films, jewelry designing, and even a bit of politics, married as she is to Indian politician Akbar Ahmad. She brought her perspective on Rajesh Khanna as she had associated with the star in the early days.

The Q&A with the audience was equally engaging, with Shantanu Chowdhury of Harper Collins too posing a few good questions to the panelists,one of whom was his author Gautam Chintamani.

They were all beautiful, reigning at the top; and Rajesh Khanna got to romance each of them. The magical mix of Khanna romancing these divas to the tunes of unforgettable melodies, was the stuff to die for. We brought alive all the glamour, the style, the romance with a fashion showcase curated by another glamorous Femina beauty pageant winner, Shalini Arora Kochhar. A successful hospitality consultant and event organizer, Shalini put together the fashion segment and infused the show with her vivacity by anchoring the event. 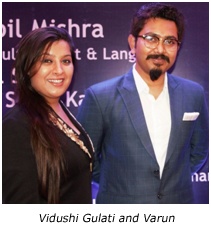 Designer Label Var-Shi, by Varun and Vidhushi Gulati put together a retro line to match the flavor of the leading ladies of Rajesh Khanna.Ashmeen Munjal’s Star Salon n Academy did the hair and makeup. Twelve highly accomplished and gorgeous women of Delhi joined in the fun, and represented twelve famous heroines. Jc Deejay mixed the music track.

Sharmila Tagore was represented by the graceful and statuesque Preeti Ghai, the owner and creative force behind the designer label Amyra, who opened the show dressed in an elegant sari from her own collection, gliding down the red carpet to a popular track from Tagore’s many movies with Khanna. (Aradhana, Amar Prem, Safar, Daag, Avishkaretc). Asha Parekh’s doe eyed beauty was matched by a radiant Sunayna Bhinder Chibba, a successful business entrepreneur and social activist who successfully chairs X factor enterprises and organizes polo events and lifestyle exhibition in aid of charity. (Kati Patang, Aan Milo Sajna, Baharonke Sapneand more) 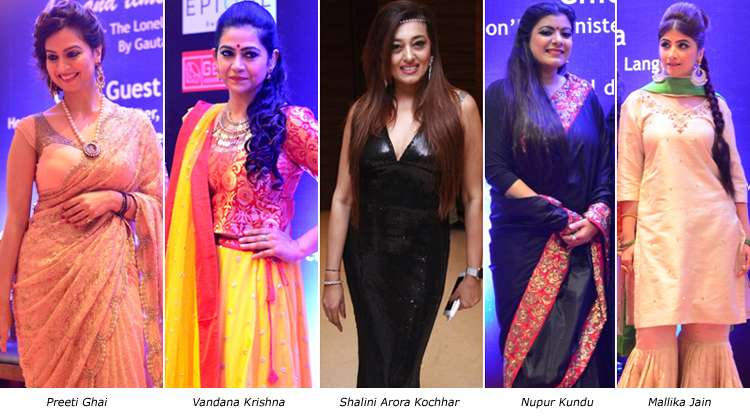 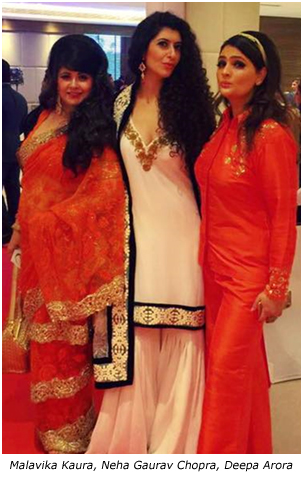 Malavika Kaura did full justice to her Mumtaz look, which she created herself. The multi-talented Malavika is not just a designer, but also a marketing expert. Her incredible levels of energy are hard to match. (Aapki Kasam, Saccha Jhuta, Roti. Apna Desh, Prem Kahani etc.) Smita Patil would have been suitably happy to have someone as pretty and talented as Nupur Kundu represents her. The graceful, doe-eyed Nupur was dressed in an elegant black sari with an embroidered red border, created by Var-Shi, Nupur Kundu is a Contemporary Visual Artist and recipient of the Indira Gandhi Priyadarshini Award for Fine Arts, 2008, and more such important awards. (Anokha Rishta, Awaam, Amrit, Nazrana etc)

The celebrated Interior Designer and Environment Activist Parull Mahaajan fittingly portrayed Shabana Azmi.  The petit and soft spoken Parull packs a hefty punch as the CEO of  House of Design. Winner of several awards and honours in the field of Interior Design, she also writes for magazines and newspapers and features on television shows. Shahana Mookerjea brought her confidence and grace to showcase a very beautiful Hema Malini, the only actress to have co-starred in nearly twenty movies with Rajesh Khanna, Mallika Jain looked absolutely divine in her portrayal of Leena Chandravarkar, The many oohs and aaahs greeted her entry dressed in a white garara and kurta with soft metal work, a green silk dupatta carelessly draped close to her neck, the large ‘chandbalis’, the bouffant, retro eye makeup, inspired by the popular movie ‘Mehboob ki Mehndi’, very chic.Vandana Krishna, dressed in a red brocade blouse teamed with sunshine silk lehenga with little gold motifs and a zari border,  retro hairdo, a red bindi, magical eyes, slayed it as the seductive Reena Roy, who starred in five movies with Khanna. (Hum Dono, Dhanwan, Naseeb,etc) 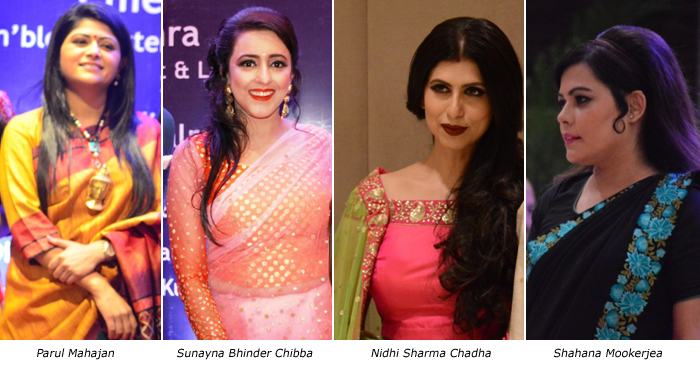 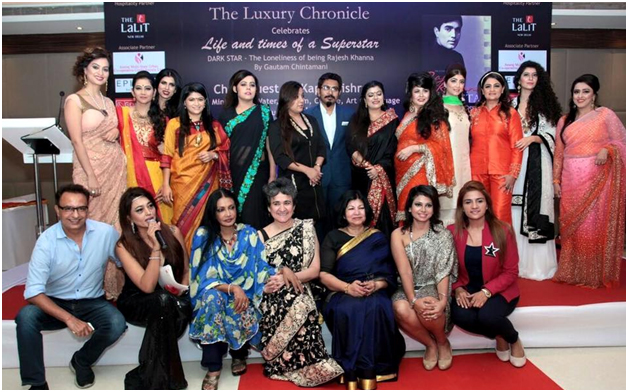 Shalini Arora Kochhar, dressed in a sleek black mermaid gown, with the diamond head-band, clearly matched the oomph of the very glamorous Zeenat Aman. The rain drenched song in Ajnabee, ‘Bheegi bheegi raton mein’, portraying the dashing Khanna with svelte Zeenat, or was it Shalini? Zeenie baby would have been proud to see our gorgeous Shalini close the show. She starred in six movies with him. (Ashiq HoonBaharon Ka, Ananbee, Chhaila Babu, Ashanti etc)