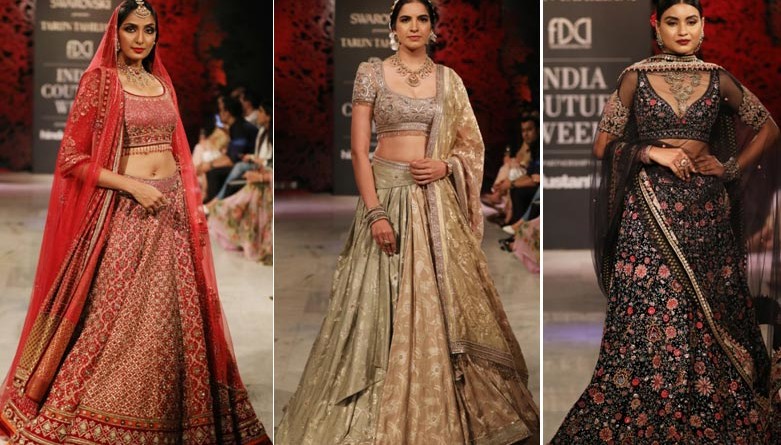 The advent of the wedding season gets the Indian designers all in a frenzy, each aiming for a chunk of the alleged Rs 100,000 Crore wedding-market pie. The single-point USP of each designer solely revolves around making an unusual, exclusive, dramatic and outstanding bridal wear collection, kicking off a race to create the most dazzling, glittering, lehengas, cholis and dupattas at break neck speed. The master cafts persons, a.k.a. Indian artisans and embroiderers work over time, round the clock. One wonders, if there were no embellishments where would Indian bridal wear be. Therefore, aren’t the craftsmen the stars of Indian bridal couture? There isn’t much excitement in an umbrella style lehenga, tiny choli and 3 metres of dupatta without expert craftsmanship.

At the 12th edition of FDCI India Couture Week 2019, ten designers unveiled their versions of bridal couture staples – the lehenga, choli and dupatta. The designs and look of the trio moved from traditional to contemporary though the latter proved a more favoured option for most designers. 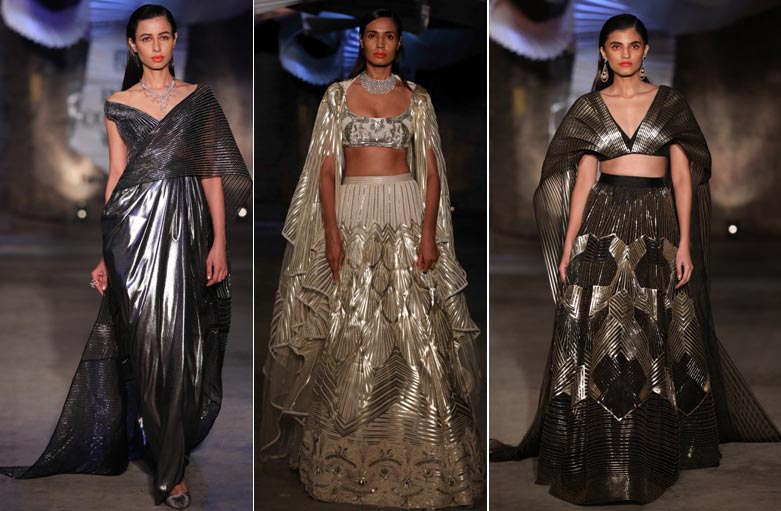 For Amit Aggarwal traditional lehengas, cholis and dupattas get his creative twist. He doesn’t believe in the zardosi, paisley and resham story but created a fantasy of embroidery with his distinct metallic stripes that were merged creatively with ruffles and frills. At times he eliminated the dupatta and at other times it was a cape that looked perfect with the lehenga and choli. Very often Amit went still more adventurous when he allowed the dupatta to flow from the choli and over the shoulders. So his “Lumen” collection was for the New Age Brides who don’t like walking down the conventional aisle. 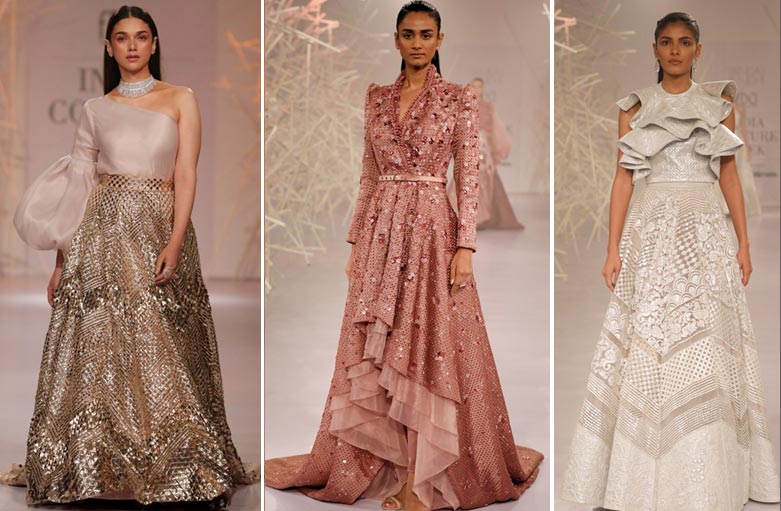 The designers Pankaj and Nidhi made their debut with a couture collection “Mosaiq”. Primarily western wear designers, their ethnic bridal were a total fusion of the East and East with distinct occidental touches. Their lehenga was an ideal floor length skirt, while the choli turned into a cascading ruffled blouse or was a one-shouldered balloon sleeve creation. Their wonderful 3D hand cut appliqués in metallic fabrics were show stealers and a western bride could just as well wear the wedding creations as she takes her vows. 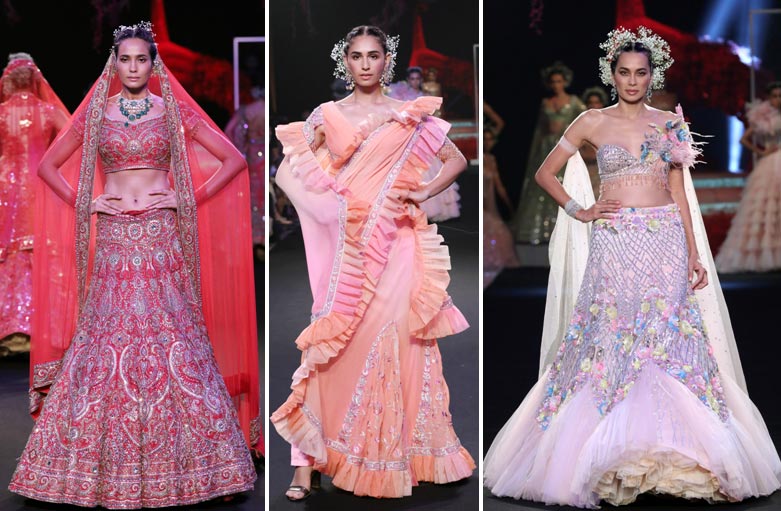 The “Amara” collection was extreme bridal couture and Suneet Varma ensured that the creations had glitz, glamour and lots of drama. His lehengas moved from the traditional skirts to those that resembled Spanish flamenco ensembles. Suneet’s cholis remained basic or were tiny bikini tops with bouquets of feathers but at other times, Suneet brought imposing collars for the cholis. Dupattas were a ‘must have’ but it is Suneet’s embroidery that moved from feathers, resham, sequins, crystals to mirror work that were scene stealers. 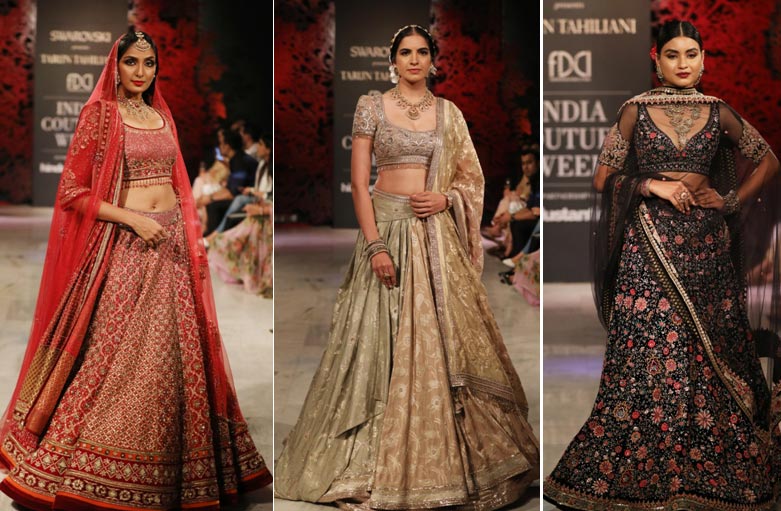 Tarun Tahiliani’s “Bloom” collection stayed true to tradition but it was his varying embroidery techniques that set the looks apart. From the traditional panelled long skirt to a layered one and the with ombré sequinned embellishments – each was an exclusive piece. The cholis were demure and traditional while the dupattas were an important part of the trio. With the basic ethnic bridal wear silhouettes as part of the collection it was the overall look that made the offerings eye-catching. 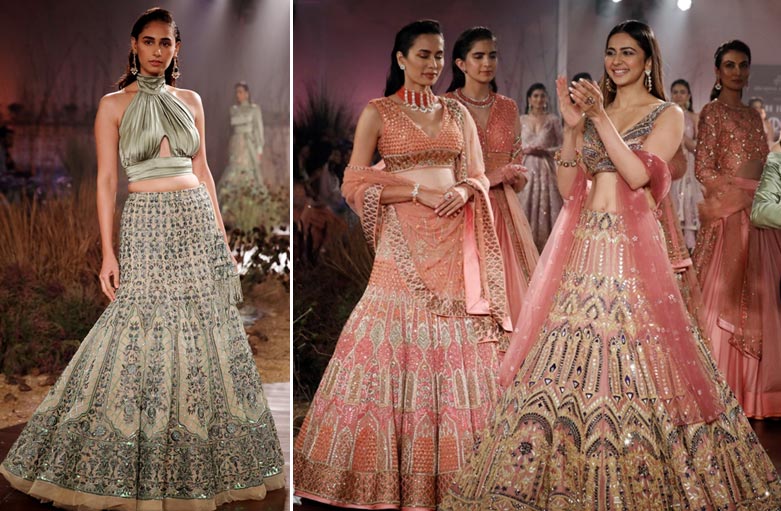 “The Savannah Saga” by Reynu Taandon stayed true to the traditional look but at times worked with a fitted lehenga that suddenly flared into a panelled one. But the choli got more attention as it moved from a draped satin halter version to those with tiny shapes and matching embroidery to the lehengas. To complete the trio, the dupattas too matched the lehengas and cholis in colour and embroidery but were favoured in tulle. 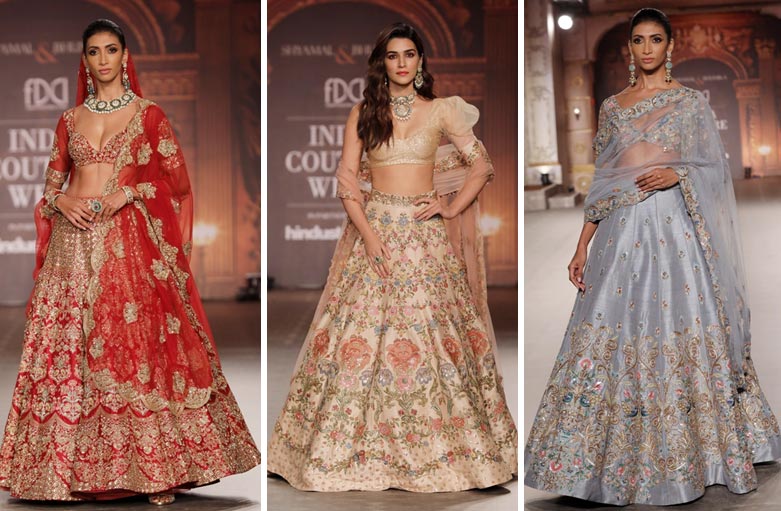 The designer duo Shyamal and Bhumika stayed faithful to tradition with their “The Renaissance Muse” look but for the  finale they played with the choli giving it a one-shouldered puff sleeve for the corset like bodice. On the other hand, red the favoured colour was used for heavily embellished trios with almost similar embroidery. An unconventional colour lilac broke the monotony with a tulle and silk-layered skirt and a draped fan shaped sleeved choli. 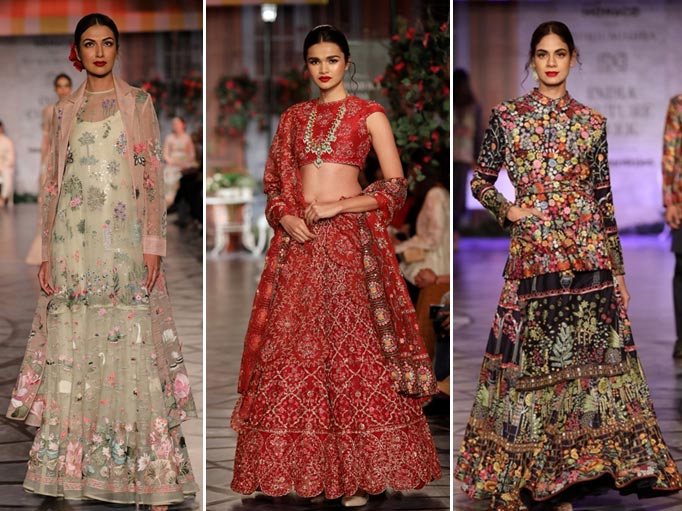 “Malhousie to Monaco” was the title of Rahul Mishra’s couture collection with colourful village scenes embroidered for the predominantly white fusion line. But when it came to pure Indian bridal offerings, Rahul played save by picking the sindhoor red as his favoured colour and then showered the creations with ornate embroidery that covered every inch of the fabrics. His experiments for the bridal trousseau were quite limited as he played to poplar demands. 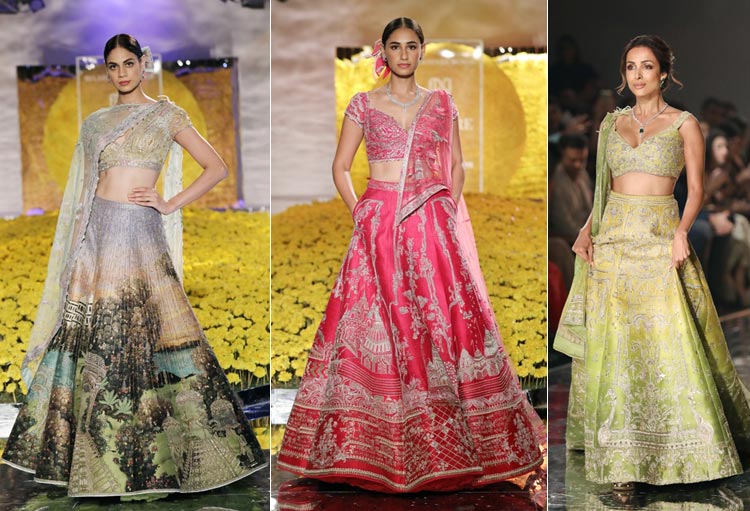 With the collection called “Varanasi” it was but natural that the lehengas would be the canvas for Sulakshana Monga’s embroidery. The architecture of the Holy City was prominently embroidered with the lehengas almost appearing like paintings or maps on display. The colours vied with the rainbow, while the cholis were quite sedate and the dupattas matched the hues of the two creations. The silhouettes were traditional and aimed at the conservative dressers. 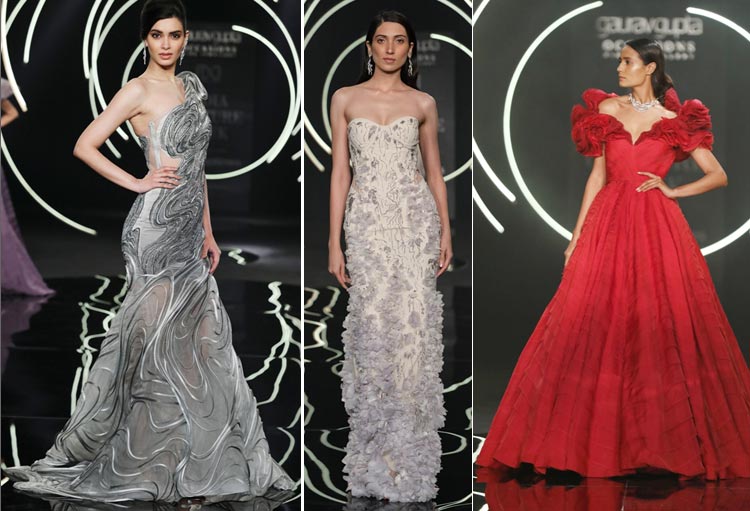 The collection called “Undercurrent” by Gaurav Gupta stayed true to his moulded, cascading, design elements. So his lehengas were draped or layered and his cholis were form fitting with intense detailing, pleating and fine embroidery with long sleeves, off-shoulder styles or moulded accents. His cape like ruffled, layered, dupattas emerged from the shoulders and gracefully reached the floor. White and pastels were the colours, Gaurav favoured for this wedding wear. 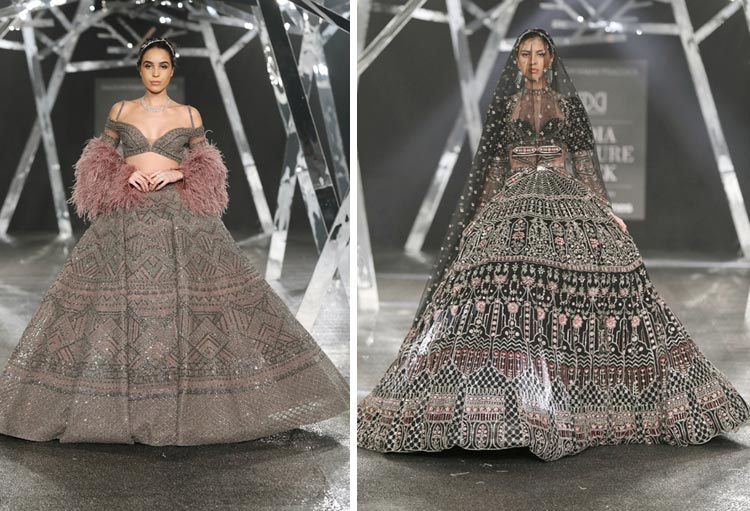 The collection called “Bonjour Amer” had the inspirations of the Pink City for the embellishments but with the sensibilities of Parisian silhouettes. Lehengas were showcased with giant crinolines, bringing a retro touch, while the cholis moved from halter bikini styles to provocative off-shoulder corsets or long-sleeved ornate visions with feathers flowing all the way down to the floor.

Dupattas were at times ignored or turned into feathered shrugs or veils. The colours chosen were shades of grey and gun metal or black  – all totally revolutionary for bridal festivities.