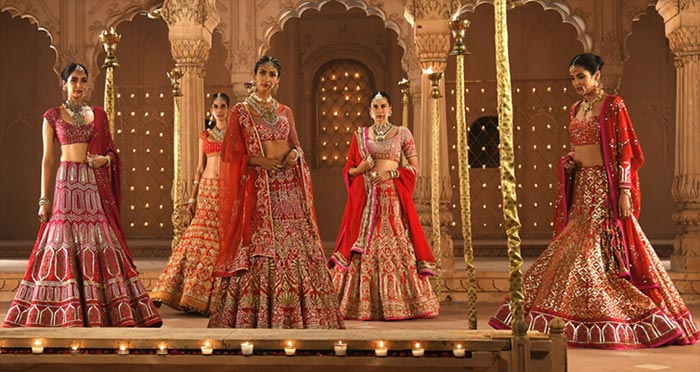 The India Couture Week 2020 presented by the Fashion Design Council of India from September 18 to 23 was a first of its kind digital presentation that allowed the 12 designers to not only showcase their creative talents but brought forth their story-telling skills in an experimental and innovative manner. Trends that were evident from the collections were the extreme embroidery that was presented imaginatively, without which many of the collections would have not had any visual appeal. When it came to trends, it was the shoulders and waist of the creations that many of the designers concentrated on although, at times the lehenga or the maxi skirt were also the base of very dramatic interventions. 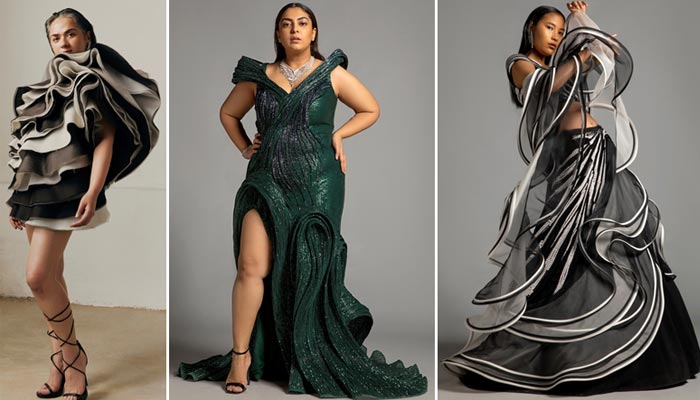 What trends can one observe from Gaurav Gupta’s “Name is Love” collection? The designer never leaves his wired, sculpted, moulded creations for women. So the firm swirls of fabrics were evident for the ball gowns, some concept saris and Gaurav’s version of ethnic wear. Angular tiered minis, moulded one-shoulder gowns and sari-inspired creations were seen in glorious colours. Shoulders were given importance with the wired, abstract, exaggerated, shapes soaring upwards in an almost rocket like fashion. For men, Gaurav offered turtleneck shirts under jackets, which were flamboyantly embroidered with flying birds, swirls of white embellishments, braids and abstract spikes. The grey double shawl collar for a one-button, black, velvet jacket and braided accents further added to the stylish impact on the male wardrobe. 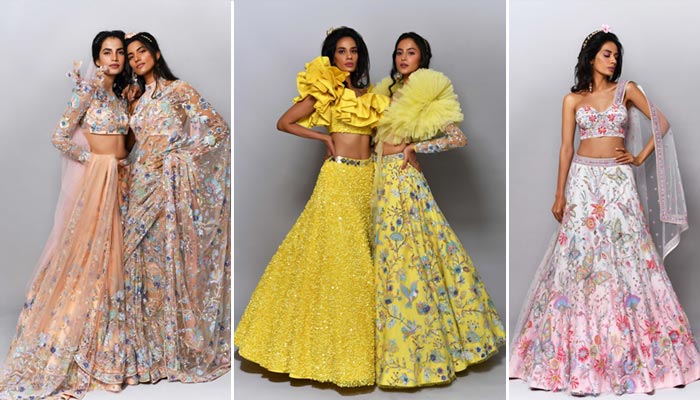 For his collection “Timeless”, shoulders also enchanted Suneet Varma, whose bright rainbow colours for artistic lehengas, cholis and dupattas were given an almost Spanish flavour. Tulle was ruffled and layered on shoulders and necklines of tiny sexy blouses. Angular peplums appeared for one-shoulder blouses that were teamed with heavily embellished chevron-patterned skirts. 3D appliqués proved to be the mainstay of Suneet’s ensembles as they completely overwhelmed the garments. Fluttering butterflies, birds, and flowers, vied for attention in multicolours. The illusion effect of tulle enhanced the rear styling of blouses with sprigs of flowers. Keeping the choli as the focal point of the garments, Suneet designed them with cut away shoulders, tie-up backless options or added dramatic shawl collars for added impact. Ruffled tulle boleros, halter mirror work cholis and shoulder corsages were fashion trends to watch out for. 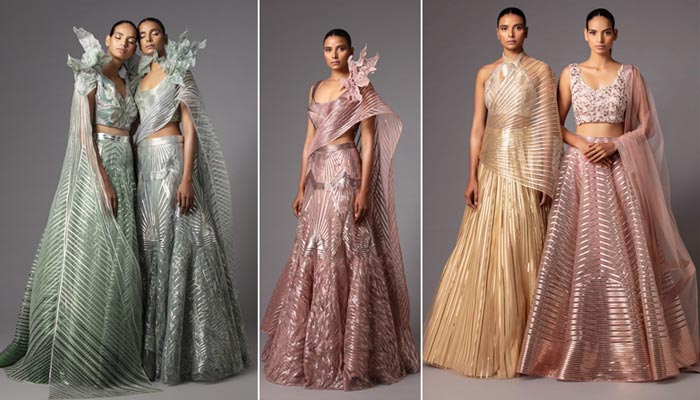 With just 12 pieces, Amit Aggarwal not only told an extremely detailed fashion story but also gently hinted that the lightness of the collection could even encourage the latent sea nymph desires in his buyer to take a plunge under water and perform balletic movements. The polymer strips, rubber tubes and waste materials along with 3D abstract geometric patterns were intricately crafted and finely finished. Attaching the dupatta to the lehengas, and cholis and allowing them to even flow from the side of the maxi skirts, Amit brought in convenience with glamour. Amit too once again enhanced the shoulders with abstract wired forms inspired by the ocean, earth and sky theme. 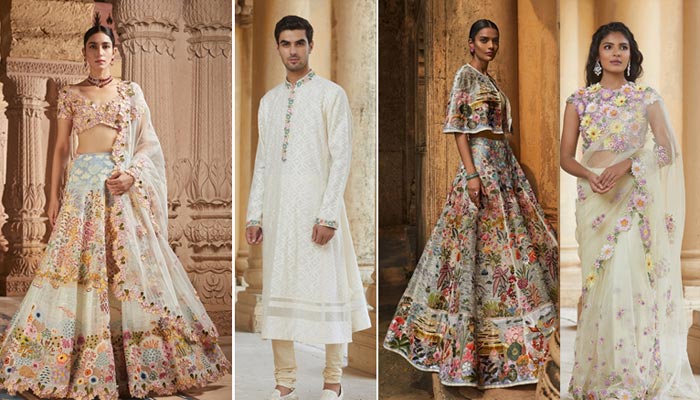 While garment construction and innovations are not always what Rahul Mishra concentrates on, he ensures that his hand-embroidered stories always kept his buyers enthralled and that is what he unveiled in his collection, “The Lotus Pond”. Saris, simple, long, will-power gowns, lehengas, cholis, dupattas and mini capes over an evening wear creation, showed Rahul’s mastery over embroidered jaals, which he created with great expertise. The motifs of sea and land beings like lotus, butterflies, birds, fish, and dragonflies were translated on the garments in vivid hues. The bustier gowns were lavishly embroidered on silk organza and the intricately crafted ethnic wear trios, tiered gowns and the long sheer robe with never ending train were once again a back drop for the magnificent embroidery. For men’s wear Rahul stayed traditional with kurtas, Sherwanis and bundies in pastel hues with white embroidery to match the theme. It was a collection that paid homage to India’s master craftsmen and their skills. 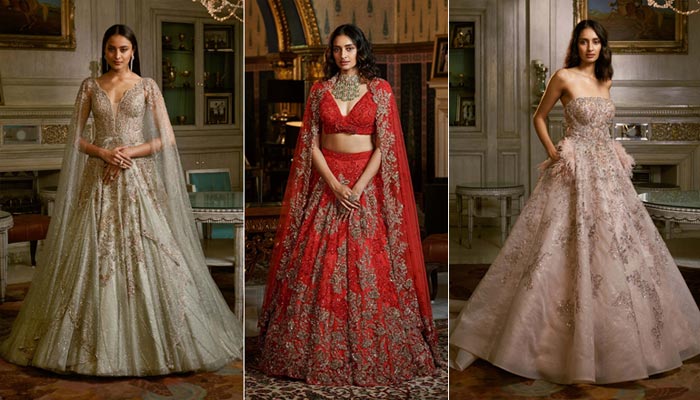 Feathers, flounces and fashion were the key words for the Dolly J collection called “Gulenaar”. Capes with feathered shoulders vied for attention with layered ruffled versions of the same. Dolly J too gave her creative attention to shoulders and then moved to sleeves, which she lovingly fluted or preferred bell sleeves and also even added flouncy floor length trains to them. The bustier styled cholis and will- power Cinderella ball gowns were dreamt up keeping the western wear buyer in mind. Capes shimmered with intricate embroidery as the soft pastels moved to bright reds for the predominantly chikankari collection on specially woven luxe silk organza with jacquard that was a grand bridal wear offering. 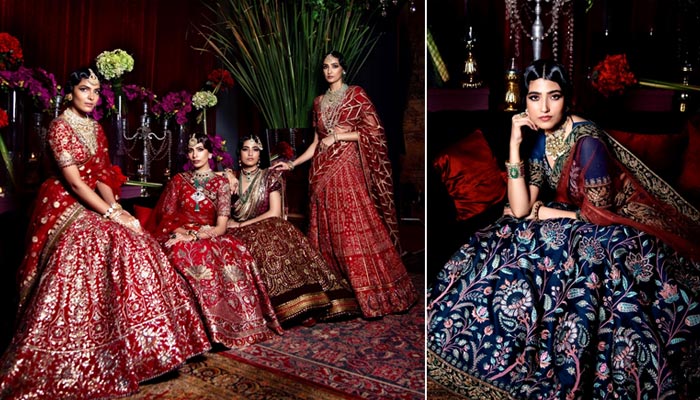 The “Bursa” collection by J J Valaya was an intricate study of inspirations from the Ottoman era. The one distinct trend that Valaya advocated was aimed at the waistlines, which the designer cinched with ornate belts for men and women. Whether it was the sari, lehenga, choli dupatta trio or Sherwanis, the waist was the focal point of the outfit. Adding another interesting trend was the Ika jacket, which was the younger version of Valaya’s Alika one. Prints and embroidery played a significant role in the “Bursa” collection, which paid creative attention to the lehenga worn with stylishly designed cholis. The sari with arresting borders and the men’s Sherwanis with exotic embroidery and shawls with dramatic motifs were dipped in a rich deep colour palette, which was lush and stunning. The striking hand-painted buttons and the shimmering silk thread, beads, pearls and zardosi embroidery highlight  the ensembles.

With shades of baby pink, fuchsia and red as the restricted colour story of her “Surkh” collection, Reynu Taandon unveiled a line of traditional lehengas, anarkalis, saris, shararas, ghararas, kurtas and kurtis. From mini full-flared kurtas and the floor skimming flared ones that were lavishly piped with gold, the collection was a mix of ensembles to suit varying wedding events but with that distinct de ja vous feel. An occasional tulle ruffle appeared at the hem of the panelled lehengas, while the drop-waist version of the same with voluminous skirt or the mermaid style presented the outfit in silhouettes that weren’t constant. The cholis revealed long-sleeves with an emphasis on the backless style with latkans or were seductive with off-shoulder necklines. The zardosi, block prints, Gota Patti, foil and gold motifs, along with patchwork were part of the surface ornamentation.

SHANTANU & NIKHIL – RECREATING THE PAST 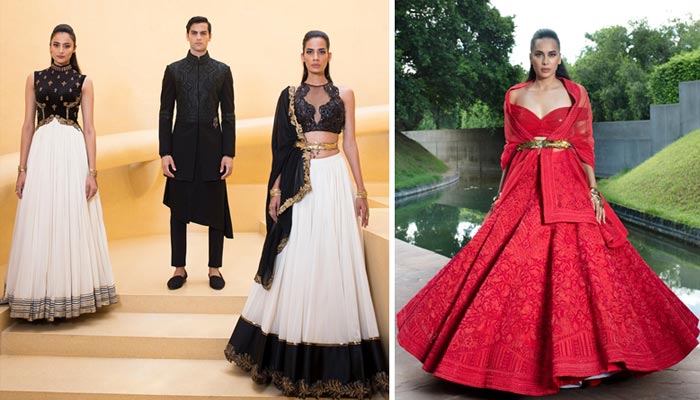 “The Resurgence” by Shantanu and Nikhil was a grand bridal and occasion wear line. For women, the Goth inspired gowns in shades of silver, ink, maroon, wine, black and white featured ruffled one-shoulder accents, strands of beaded chains, intense micro pleated diaphanous skirts, draped short or long capes, tiered silhouettes and lots of metallic embroidery. The illusion effect with net was visible for the bodice, shoulders and panels. Men’s wear had style and elegance with layers and drapes.  Bundgalas, angular styled kurtas and jackets were teamed with narrow lean pants and embellishments that highlighted the collars, elbows and waistlines of the garments. The collection for both sexes sent a strong message of power dressing as well as neo-luxe apparel for the bridal couple. 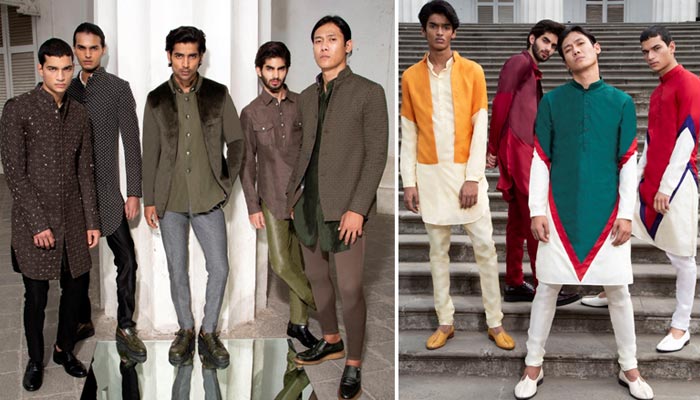 Called “Hide and Seek” Kunal Rawal’s men’s wear line stayed so true to his distinct design sensibilities that at times there was a nostalgic de ja vous feel about the garments. It was occasion wear for the men who like to experiment. The ivory section with intense beadwork and French Knots gradually moved to pastel pink, blue, lemon with a smattering of tiny embroidered motifs. The line then burst into jewel tones with bold chevron colour blocking and faux attached contrasting cropped jackets. The mini bolero added a quirky touch to the dhoti pants and lean kurta. The long-sleeved kurta-shirts with geometric embroidery, button less Sherwanis, heavily encrusted bundgalas and bundies with discreet craft; completed the look that paid homage to the legacy from Indian masters. 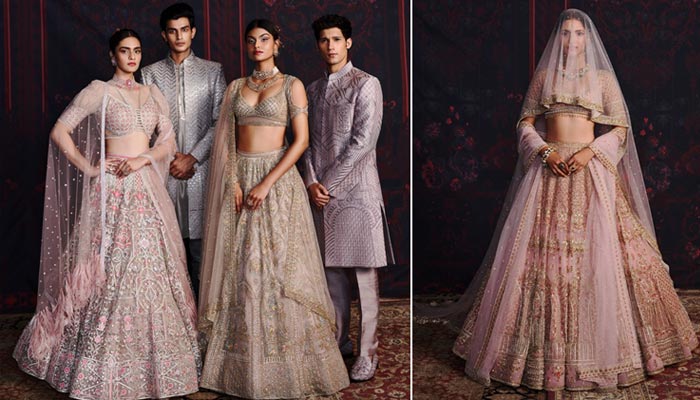 The designing duo Falguni Shane Peacock stayed true to their creative aesthetics of multi glitz and glamour for the collection “Marry Me in Jaipur” through their film “Spectacle Privé”. From white to sun yellow, emerald, black, pink, electric, white and finally red, the collection was a sumptuous feast of embroidery. Feathers dominated the lehengas, asymmetrical skirts, hair accessories, cholis and dupattas. Beads appeared as chains to highlight the tiny cholis. Panelled bubble lehengas were an innovative look at bridal wear. The crinoline like skirts had an old world charm, while embroidery was given an almost fragile lace like treatment for sleeves and necklines, which were created in shapes that moved from deep “V” to wide scooped, sweetheart or square forms.  Men’s wear was sober and traditional with white Sherwanis being favoured except for an all red look for the groom to match the feisty red of the bride’s attire with elaborate floral headgear.

ANJU MODI – TRADITION TO THE  FORE 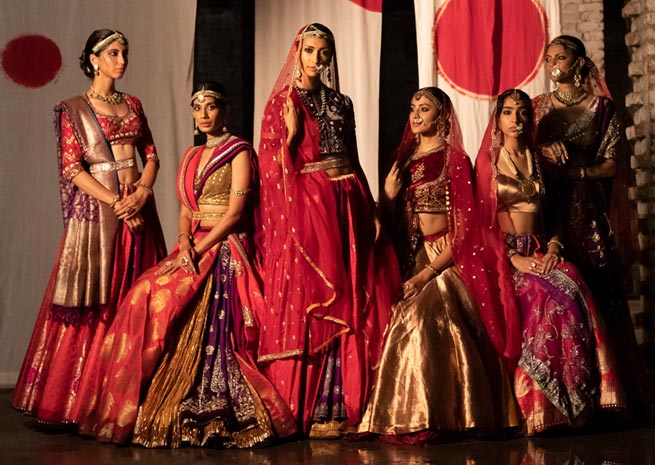 The “Sindoori” collection by Anju Modi was all about tradition. The line brought forth the classic Indian bridal look of lehengas, saris, anarkalis, shararas and Ghagras. The tiny mini wing cap sleeves that emerged over long-sleeved cholis and angarkhas could be a trend to look out for. Belts once again made an appearance to highlight the creations. Layering played an important role for many ensembles, while the tiered frilled kedia top, the peplum kurtas, lavishly bordered saris and cholis with lacy long-sleeves added to the bridal wear splendour. The embellishments were chosen with care as zardosi with dabka, Mukaish and foil printing provided the necessary shimmer. Shades of Sindoor red were of course dominant for the brocades, velvets, tulle and organza. The multiple dupattas in graduating tones of red as well as textures added to the grandeur of the collection. 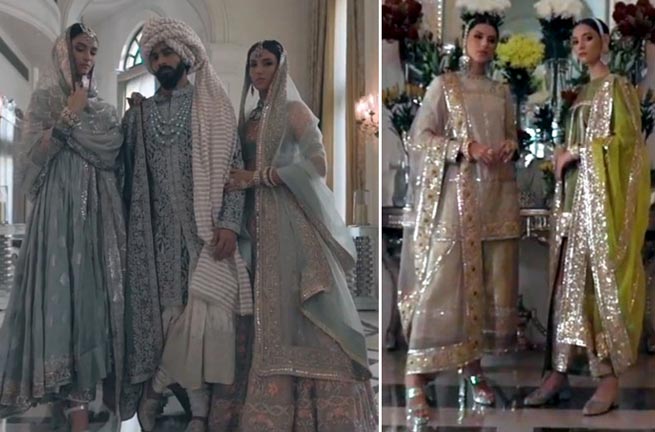 The “Ruhaniyaat” collection by Manish Malhotra was all about the tradition of Awadh and the grandeur of Punjab from the Mughal era. The opulent bridal wear for men and women featured Kalidar kurtas, Chogas, ghararas, lehengas, jamas, izar salwars for women and heavy shawls for men. The embroidery was the mainstay of the collection with the silhouettes being regal and voluminous with long trains for the lehengas. The beautiful hand embellishments of Rajasthan, Gujarat and Kutch were lavishly splashed on the traditional ensembles. Men’s wear was grand with black flowing Chogas over heavily embroidery angarkhas. A variety of kurtas in pastel tones added to the masculine appeal of the collection, while an occasional short kedia top for women gave style options.