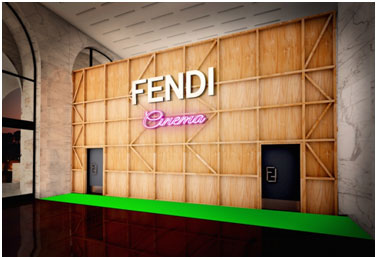 Italian fashion house Fendi, which is internationally known for its fur, ready-to-wear, leather goods, shoes, fragrances, eyewear, timepieces  et al, has decided to celebrate its long-lasting bond with the world of Cinema through an exhibition which explores in a digitally and immersive way the relationship between FENDI and the Cinema. Entitled FENDI STUDIOS, the exhibition will be held at Fendi’s new headquarters in Rome, Palazzo della Civiltà Italiana. The exhibition will be open to the public with free admission from 27 October 2017 to 25 March 2018.

For the occasion of the exhibition, the Palazzo della Civiltà Italiana will be turned into different cinema studios composed by a series of interactive movie stages 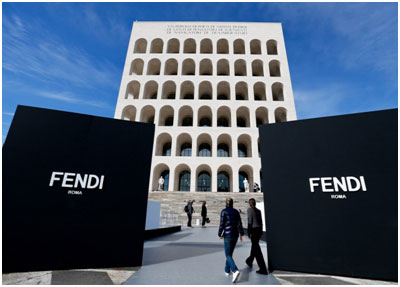 including also a real cinema. Speaking on the occasion Silvia Venturini Fendi, Creative Director for Accessories, Menswear and Kidswear at FENDI said, “Cinema has always been an important part of our family life and of our brand. Indeed, FENDI has always had a deep bond with Cinecittà. As part of the creative and artistic side of Rome, the Fendi sisters have been involved in collaborations which today can be considered groundbreaking. Approached by world famous costume designers, such as Piero Tosi and Milena Canonero, they created furs and costumes for memorable cinema productions. We have worked alongside the greatest directors of yesterday and today, from Luchino Visconti to Wes Anderson, from Martin Scorsese to Giuseppe Tornatore, and we still continue to do so. This exhibition is a way of celebrating in a very innovative way a relationship based on affinities and nourished by the desire to experiment, to tell stories and to make dreams come true.”

Over decades FENDI has manufactured several outfits, accessories and fur pieces for international movies, from Italian new wave to American blockbusters, and thus the idea to feature those movies in one unique exhibition. This costumes collection will be displayed and presented in the several rooms of this exhibition showcased in the Palazzo della Civiltà Italiana, which is itself linked to cinema history, as Boccaccio 70,  Titus, Zoolander II, to name a few.

The exhibition will let the visitors immerse into a digital experience where they could interact and reinvent the movies, by entering “into the scenes” and being themselves the protagonists, while at the same time discovering FENDI’s iconic pieces. They will be able to take selfies and share in real time this unique experience. 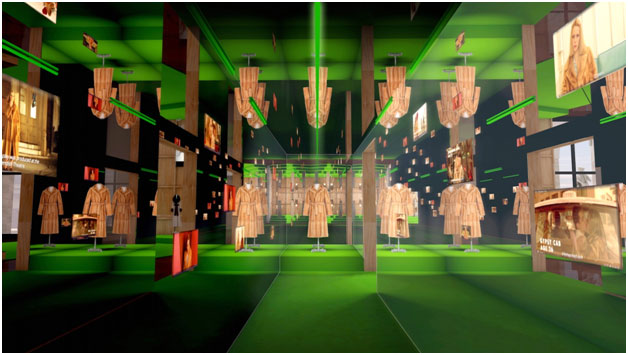 A vintage Italian style cinema ticket kiosk welcomes visitors in this glamorous world followed by the Introduction wall that narrates the key phases of the exhibition. The different areas then define a multi-sensory path, composed by a series of interactive movie stages that reflect the most iconic FENDI costume creations for the cinema world. The first one, inspired by famous car scenes, as Evita, Never Say Never Again, Femme Fatale and The Grand Budapest Hotel, with a green screen and a real car will let the visitors take action in a classic cinema studio. In the second area, by looking through a real window, visitors will see themselves into a New York City façade using a giant mirror and video projections, featuring the movies symbolic of this city as The Devil Wears Prada and The Age of Innocence. 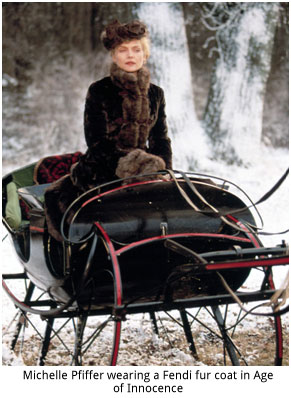 The protagonist of the third room is the movie Gruppo di FamigliaIn Un Interno, featured in a kaleidoscopic slow-motion scenery where the visitors will be portrayed. An infinity mirrored corridor will capture the visitors while entering in the fourth environment of the exhibition, finding themselves incorporated into an iconic movie scene.

The fifth room features Palazzo della Civiltà Italiana itself and the movie Titus; visitors’ faces are projected into a scale model of FENDI’s headquarters together with a video mapping. The sixth room will showcase the movie Making Dreams: Fendi and the Cinema by Antonio Monfreda and Patrick Kinmonth, produced by FENDI in collaboration with Cinecittà Studios in 2013, filmed in its spectacular movie sets by night starring iconic FENDI cinema furs.

Aside from the exhibition, at the end of the digital experience path, a projection room will be showing, like a real movie theater, a selection of movies that go back to the relationship between FENDI and the Cinema, as The Legend of 1900, Once Upon a Time in America, The Age of Innocence, And the Ship Sails On, Evita, The Devil Wears Prada, to name a few.

For those who do not know, the historic Palazzo della Civiltà Italiana, also known as the Square Colosseum,was commissioned by Dictator Benito Mussolini in 1943. The six-story building was designed by architects Giovanni Guerrini, Ernesto Bruno La Padula and Mario Romano, but was abandoned due to the Second World War.  Leased to Fendi for a period of 15 years, in 2015 it was renovated by local architect Marco Costanzi.