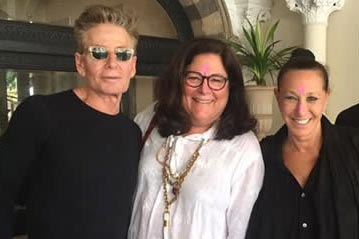 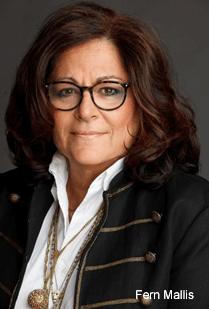 For the longest time, Fern Mallis has been the moving force behind major fashion bodies and fashion weeks, in the USA as well as around the world. Her bio is impressive. As Executive Director of the Council of Fashion Designers of America from 1991 -2001 Fern created ‘7th on Sixth Productions’, which is now known as the very popular New York Fashion Week. When NYFW was acquired by global media giant IMG in 2001, Fern became Senior Vice President at IMG Fashion and the travelling ambassador to various fashion weeks like Los Angeles, Melbourne, Miami and Berlin, which IMG added to its portfolio under Fern’s guidance.

As part of the Indian fashion weeks since they first started in 2000, Fern has watched the growth of Indian designers over the past 16 years. Awarded the Lifetime Achievement Award from the Pratt Institute and the Fashion Institute of Technology she is now a fashion consultant after leaving IMG in 2010 and is President of Fern Mallis LLC.

Her series of talks at New York 92Y called ‘Fashion Icons with Fern Mallis’ featured top American fashion stars like Kenneth Cole, Suzy Menkes, Diane von Furstenberg, Bruce Weber and many more. The talk show was also translated into a book, which is doing very well. In an exclusive interview with The Luxury Chronicle, Fern Mallis talks to Meher Castelino on fashion in America and India.

You were part of the New York Fashion Week what was your experience in organizing it?
There could be an entire book trying to answer this. It took almost 2 years, lots of negotiations, coercing designers, raising funds via sponsors for the very first time, and hiring a ton of freelance people, producers and so forth.
You were the Executive Director of the Council of Fashion Designers of America from 1991-2001 and created the ‘7th on Sixth Productions’ or New York Fashion Week as it is known today. How difficult easy was it?
It was not easy, but it was an idea whose time had come and was always something the industry knew was necessary…the planets aligned and we made it happen.
How did you handle the attitude of designers like Kanye West?
Kanye was never part of this when it all started and when he became a designer I was no longer running FW.

Are USA designers more business savvy than the ones in London, Paris and Milan?
I think all those cities have extremely savvy and smart designers who all run successful businesses around the world.
How difficult or easy is it for an Indian designer to break into the USA Market?
It’s not easy.  As an Indian designer needs to truly commit to all it takes to succeed in USA. They need to spend a great deal of time here and meet all the players. They need to get their sizing of garments in line with international standards – same for labeling, fabric content and care. They need to understand deadlines and delivery dates and factor the cost of doing business here. They need to be more communicative and answer emails in timely manner. They ideally need a showroom and representation in New York to handle the business and follow up.

Why do you think Indian designers haven’t had a firm hold in the West? Is it lack of professionalism or design sensibilities? 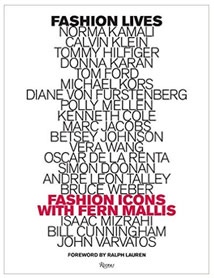 It’s basically because of what I said in previous answer. I do think many have the right design sensibility.

How is your new venture Fern Mallis LLC progressing? What are its aims?

My consulting business is doing fine. Its aims are to work with clients I like and have a good time working with them.

How did you enjoy anchoring the ‘Fashion Icons with Fern Mallis’ show? From fashion weeks to TV how easy was the progression?

Fashion Icons is an interview series. Not a TV show.  I love doing the interviews with the fabulous and iconic designers and other industry leaders.

How did you select the subjects for the show?
No brainier. It’s the best people who have a riveting story to tell about their life and career. 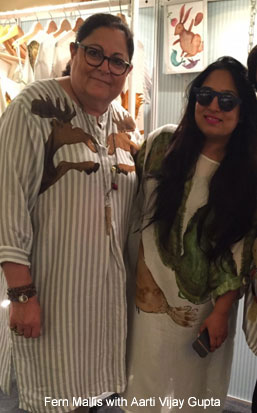 You wear a lot of clothes by Indian designer Aarti Vijay Gupta. Why have you not got her into the USA stores and fashion weeks?

It has not been an objective of hers and she like everyone else needs to do the work necessary to comply with International standards.  I do believe her design aesthetic would work in the U.SA.

You were part of IMG from 2001-2010 how different is the IMG in the USA to the one in India?
I’m not in a position to compare them.

Within the Indian context, what is your impression of the fashion weeks here? Do you see enough business orientation here as compared to global fashion weeks?
I see a focus mostly on Indian domestic business and perhaps the UAE. I think the Fashion Weeks are successfully produced. There is lots of talent and also lots of business to be done in India.
Fashion brands rely heavily on celebrity association, such as the Oscars, Cannes. What are your views on that?

It doesn’t hurt to have a major celebrity wearing your clothes at a mega-media event generating great press.

Currently, fashion shows are streamed live on internet; next season trends shared instantly across social media. Projections are that the ramp is redundant now. What are your views on this? How would you rethink fashion weeks in the 21st century?

It’s an issue being addressed by the various major fashion weeks. Social media is bringing the looks to the public at a rapid pace and deliveries lag behind 6 months.

Do you think the concept of ‘current season’ fashion weeks like LFW is better than the six months advance shows?
Depends on the audience and the designers’ ability to deliver.
How do you think new fashion collections and sustainable fashion can be balanced to ensure good business for designers?
It’s an issue of great importance and more companies should be focusing on this.
How is your book ‘Fashion Icons with Fern Mallis’ doing?
Extremely  well. It’s in a second printing. It is also being published next year in Japanese.

What is your advice to designers globally and in India?
Be Nice. Stay focused.
Do you think Indian fashion designers are more into tradition and luxury instead of prét and affordable clothes?
Some are and that’s fine. Others aren’t and that’s fine too. There are many constituents to address and dress.
Your definition of luxury.
Time – there’s never enough.