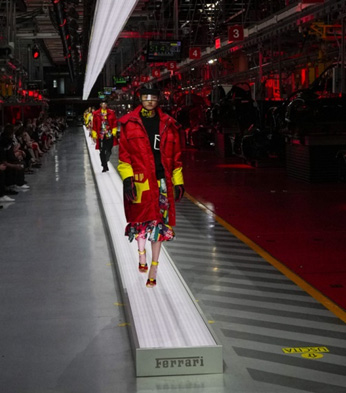 The Italian luxury sports car Ferrari is expanding into lifestyle and food, with strategic partnerships. The iconic prancing horse logo on a red sports car signified speed and luxury since its founding in 1939 in Maranello, Italy.  Ferrari’s Formula One racing team has held the distinciton of being the most successful with maximum championship wins. Cashing in on the popularity and the ultra luxury image, Ferrari is diversifying into ‘Made in Italy’ fashion and food.  Reportedly the collaborations are already in place. As reported in the media, Nicola Boari, chief brand diversification officer said that since 2019 there has seen a complete overhaul of the new project encompassing retail and licensing. The entertainmen projects include Ferrari theme parks in Barcelona and Dubai and a new e-sports venture, and luxury experiences for Ferrari owners. Along with the presentation of the fashion line on 13 June, 2021, a newly remodeled flagship store was unveiled outside the factory gate in Maranello. Plans are already afoot to open new stores in Milan, Rome, Los Angeles and Miami. 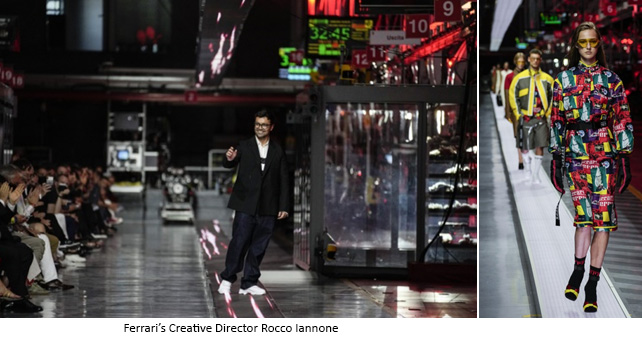 Last Sunday on 13 June 2021, Ferrari held a fashion show in its factory in Maranello, where models walked a makeshift fashion runway, unveiling the first Ferrari season-less, ready-to-wear apparel line designed by creative director Rocco Iannone.  Ferrari had hired Iannone in late 2019, appointing him as the Brand Diversification Creative Director. Iannone was previously designer at Giorgio Armani, Dolce & Gabbana and head designer for menswear brand Pal Zileri. This Ferrari apparel collection was 80% genderless and in sizes sizes from XXXS to XXXL. The distribution is planned through flagship retailers and distributers of Ferrai. The youth-centric line targets the fashionabley trendy rather than older users of the Ferrari cars.

For their first restaurant, Ferrari has partnered with Chef Massimo Bottura, who runs the three Michelin-starred Osteria Francescana in Modena. The new Ferrari restaurant named ‘Il Cavellino’, (translates to mean ‘prancing horse’ like in the logo,) is located across from the factory in Maranello. It opened in time for the fasiohn show. Chef Massimo Bottura is famous for his take on regional Italian classics, and haute cuisine. The restaurant ‘Cavellino’ is designed by architect India Mohdavi.

In March 2021, Ferrari finalized a multi-year deal with the Swiss watchmaker Richard Mille to develop a specific range of watches. As part of the collaboration, Richard Mille is involved in Ferrari’s many racing endeavours, from 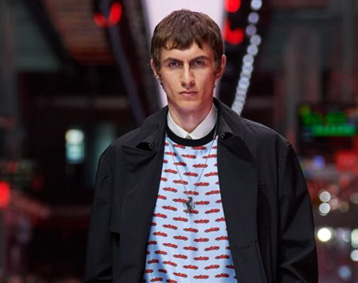