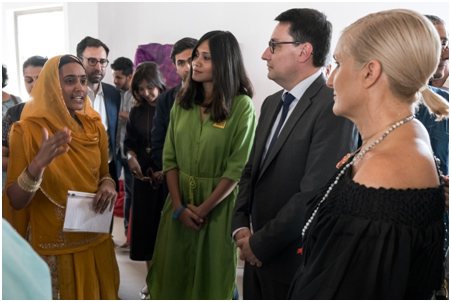 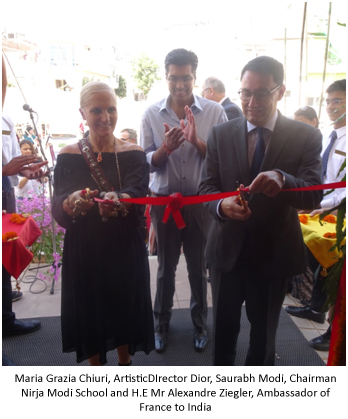 H.E. Mr Alexandre Ziegler, Ambassador of France to India, visited Jaipur to inaugurate the Rajasthan office of the French Institute India (IFI) and the Textile Lab for Women on Monday, 22nd October 2018. The second highlight of his trip, Ambassador Alexandre Ziegler, in presence of Ms Maria Grazia Chiuri, Creative Director of French luxury brand, Dior, proceeded to the soft launch of a textile and innovation makerspace created through collaboration between IFI and Maker’s Asylum.

Following the launch of the third edition of Bonjour India 2017-18, the Indo-French platform for innovation and creativity, at Amber Fort last November, France is now laying the foundation of its permanent presence in Jaipur. The purpose of this very first French Institute in India outside the national capital is to promote fruitful and sustained people-to-people contacts between Rajasthan and France. The new office will facilitate access to the many opportunities France has to offer in the fields of education and culture for the people of the state of Rajasthan. The French Institute in Rajasthan will also house its office of Campus France Jaipur, which is the French government’s one-stop-shop for the mobility of Indian students to France. France is a favoured destination for international students, including Indians, as it offers high-quality education, a dynamic environment and more than 1,300 English-taught programmes in a wide range of disciplines.

The Textile Lab for Women: from livelihood to métier d’art (high-end master craftsmanship), is endorsing India’s legacy in textile while imagining an innovative future. The Lab will work as an Indian and international platform for knowledge and skill sharing. It will promote exchanges, linking local craftsmen and other professionals and promote excellence in the field of art, craft and design through innovative approaches.

Driven by the belief that innovation can drive social change, the Lab will focus on developing a simple, sustainable model in order to boost creativity and add value to the livelihoods of women artisans in particular.

Prior to the Lab’s opening, a hackathon aimed at women artisans, students, designers, based on the Lab’s main themes led by the Maker’s Asylum team, took place. The French Institute and Maker’s Asylum will work closely with Indian and international artisan clusters, universities, start-ups and research centers to curate a year-long programme of workshops, research, residencies and conferences.

Welcoming the initiative, Ambassador Alexandre Ziegler said, ‘For the first time, the French Institute is opening a bureau outside of Delhi, which is also the first permanent office of any foreign mission in the state of Rajasthan. This 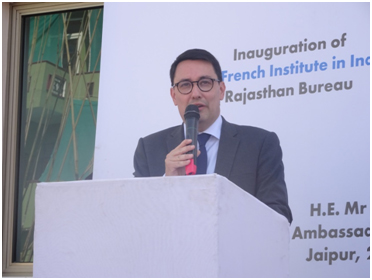 is an embodiment of our keenness to facilitate exchanges between this region and France. This is especially true when it comes to education, and the Campus France office housed here, is here to help you choose France.’

About the Textile Lab, the Ambassador said ‘We have a strong belief that innovation should drive socio-economic changes. These changes, however, will only become a reality if this Lab can gather everyone’s goodwill in developing a simple and sustainable model, in boosting creativity and market opportunities. We are building a process together, so this place will be at everyone’s disposal.’

The French Institute India is located at