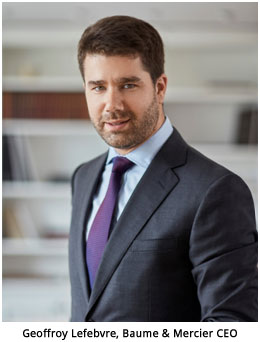 As of June 1, 2018, Geoffroy Lefebvre will step up as the appointed Chief Executive Officer of Baume & Mercier. This is a case of internal reshuffle within the parent company Richemont Group, where Geoffroy Lefebvre is already an insider as the current Deputy Chief Executive Officer of Jaeger-LeCoultre. The current CEO of Baume & Mercier, Alain Zimmerman is appointed Specialist Watchmakers E-distribution Strategic Project Director at Richemont, and will move to his new post at the same time as Lefebvre, effective 1st June 2018.

Geoffroy Lefebvre joined Richemont as Organisation Director in 2011, after ten years of experience in strategy, operations and technology consulting at McKinsey & Co. During his seven-year tenure with Richemont, Geoffroy Lefebvre was successively Group Industry Director, then joined Vacheron Constantin as Chief Operations Officer and most recently took over his current position at Jaeger-LeCoultre.

Alain Zimmermann started his career in 1989 at the L’Oréal Group. After six years, he joined the Richemont Group, holding various positions at Cartier within the Marketing Department in Munich and Paris. In 2002, he joined IWC as Area Sales Manager, before becoming the Chief Marketing Officer. Then he joined the Private Bank Julius Baër as Marketing and Communication Director for 3 years. He was appointed Chief Executive Officer of Baume & Mercier in 2009. During the past 9 years, he successfully implemented the new communication and product strategy repositioning illustrated by the recent launch of the new manufacture caliber Baumatic.

About Baume & Mercier
Baume & Mercier, watchmakers since 188 years, has always been a generous Maison that expresses watchmaking excellence in all its creations and through a simple, consistent motto devised by its founders: “Accept only perfection, only manufacture watches of the highest quality”.