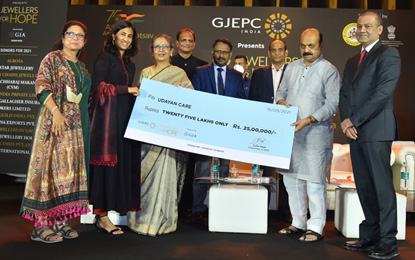 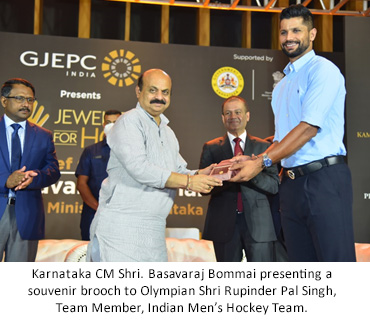 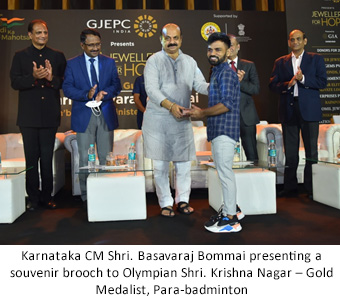 ‘Jewellers for Hope’ (JFH) is an initiative by GJEPC launched in 2014 to mobilise the entire industry from manufacturers, traders to miners and retailers, to raise funds for organisations that are doing good work in the field of education and health, or empowering women and marginalized sections of society. This year’s beneficiaries for ‘Jewellers for Hope’ were Udayan Care– a public charitable trust working to empower vulnerable children, women and youth across 15 states of India and SDA-Diamond Hospital & Medical Research Centre– a multi-speciality hospital working for providing best healthcare services to lower and middle-class society at minimum charge from last 7 years. 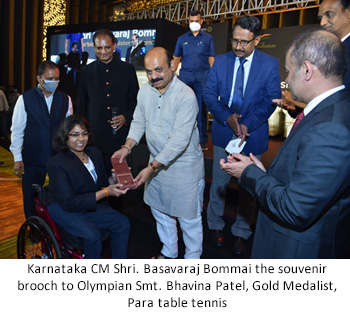 Chief Minister Shri. Basavaraj Bommai said, “Possessing a skill is the highest level of education as it makes the Indian economy grow. I am thrilled to see 4.3 million skilled workers in the sector make this happen. The jewellery business is here to flourish, as jewellery is an integral part of an Indian family. It is  donned by men and women alike and embellished on idols in temples. Jewellery is not only a status symbol but also a contingency plan for families on rainy days.” 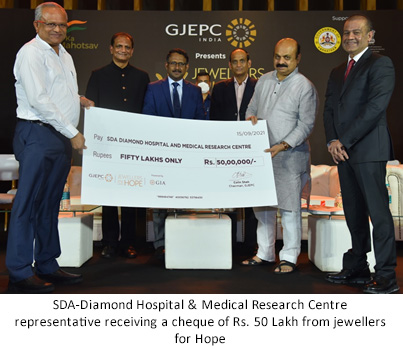 He further stated that Karnataka is setting up gem park and is working alongside the Council to explore opportunities for the same. This would also benefit skilled people in Coastal and North Karnataka. Appreciating GJEPC for felicitating Olympians, the Chief Minister said that sportsmen from the state will be encouraged and the state will introduce 75 sportsperson as part of training for the upcoming Olympics.

Colin Shah,  Chairman,  GJEPC said “The gem and jewellery industry has been at the forefront in the fight against the Covid – 19. The industry has provided overall relief to during the trying time of COVID-19. The industry engaged in numerous charitable acts as everyone opened their purse strings to help the artisans by way of providing food, medical aids, karigar relief   etc. Collectively or individually, too, the industry has been contributing immensely towards the development of society at large, and has aided orphanages, old-age homes, schools, hospitals, sanitation, and more.”

“During pandemic, GJEPC initiated the Covid fund for karigars which was transferred in the form of Direct Benefit Transfer (DBT) into the bank accounts of daily wage workers of the gem and jewellery industry. GJEPC also contributed a substantial amount to PM Cares Fund, to support the country’s efforts to combat the pandemic and provide relief measures. GJEPC has come up with Swasthya Ratna medical insurance policy for the employees of Member companies that has covered seven lakh lives till date. Swasthya Kosh fund pays 75% of the health insurance premium of contracted and unorganised workforce in the sector.” Colin shah added. 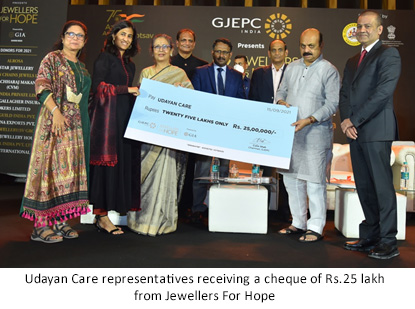 Since its inception, the gem and jewellery industry has spearheaded CSR initiatives as a way of giving back to society and uniting for a common cause. They have been the torch bearers for being silently striving towards the betterment of society. In 2020, despite the pandemic lockdowns and subsequent mass migration of workers, the industry recorded a phenomenal growth due to the unified efforts of the community. The council also has a book ‘Jewellers for Hope’ which details out all the major initiatives in detail.

The Gem & Jewellery Export Promotion Council (GJEPC), set up by the Ministry of Commerce, Government of India (GoI) in 1966, is one of several Export Promotion Councils (EPCs) launched by the Indian Government, to boost the country’s export thrust, when India’s post-Independence economy began making forays in the international markets. Since 1998, the GJEPC has been granted autonomous status. The GJEPC is the apex body of the gems & jewellery industry and today represents 7000 exporters in the sector.  With headquarters in Mumbai, GJEPC has Regional Offices in New Delhi, Kolkata, Chennai, Surat and Jaipur, all of which are major centres for the industry. It thus has a wide reach and is able to have a closer interaction with members to serve them in a direct and more meaningful manner. Over the past decades, GJEPC has emerged as one of the most active EPCs, and has continuously strived to both expand its reach and depth in its promotional activities as well as widen and increase services to its members.