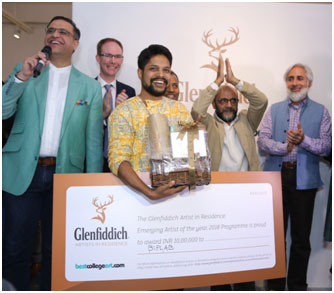 Artist Biplab Sarkar was selected to be the recipient of the Glenfiddich “Emerging Artist of the Year 2018” award from India.The announcement was made on March 17th at the Bestcollegeart.com Gallery over a showcase of the top five finalists works, whose names were shortlisted from among 1700 participants from across India. Sarkar will now represent India in Scotland as part of the Glenfiddich Artists in Residence program, where he will be spending three months at the Glenfiddich Distillery with 8 artists from around the world.

Hailing from Siliguri, West Bengal, artist Biplab Sarkar’s water colours explored the relationship of body and object in an urban context largely dealing with the lifestyle and struggles of hawkers working at heritage sites, tourist places, local market or the independent wanderers.

The Emerging Artist of the Year Award is a part of Glenfiddich’s 17-year-old Artists in Residence (AiR) program, where winners from different countries get to spend three months at the Glenfiddich Distillery in Scotland.  In addition to this, Biplap Sarkar will be awarded INR 10 lakh, which includes an international allowance of INR 120,000 per month and a work allowance of INR 500,000. He will also be awarded a solo show at Bestcollegeart.com Gallery in New Delhi. The other artists that made it to the top contenders list included- P. Yogeesh Naik, Anju Kaushik, Loknath Pradhan and Deepak Kumar.

The global coordinator and organiser of Glenfiddich’s AiR program, Andy Fairgrieve, is in India to personally hand over the award to India’s emerging artist. Peter Gordon, Director, William Grant & Sons India said, “The Glenfiddich Artists in Residence program captures the innovative spirit of the brand to relentlessly push boundaries and experiment with new ideas. Since its inception, the program has hosted more than 152 artists from 20 countries in the summer residency including 6 Indians. We are delighted to offer a platform for Indian artists to experiment and create extraordinary works in a completely unexpected setting. This year, in particular makes it all the more special as we are showcasing art works created by all the talented previous Indian winners, a testament of our commitment to the field of art.”

The Bestcollegeart.com Gallery will also showcase a specially curated exhibition of hand-picked art works from the previous Indian winners including- Juhikadevi Bhanjdeo, Yuvan Bothysathuvar, Chetnaa Verma, Krupa Makhija, SubirHati and Sitaram Swain. The works were created by the artists during their residency at the Glenfiddich distillery.

Glenfiddich Artists in Residence doesn’t set any parameters on what our artists can produce. Each year, a number of artists from around the world are selected to take up a residency at the distillery and invited to take inspiration from their surroundings to produce new work. It has become widely acclaimed in the art world for providing artists with an original setting, space and community in which to work.

The Artists in Residence programme has developed into an integral element of Glenfiddich’s tradition. Every year since 2002, some of the world’s most creative minds from around the world have been invited to live and work for a period of three months on site at the Glenfiddich Distillery. The artists have complete freedom to develop projects that are inspired by their surroundings and whisky making crafts. In fact, the program has seen many contradictory themes explored due to the dual nature of the surroundings – rich, rural yet at the same time industrial.

The Artists in Residence program in India was instituted with Best College Art for the first time in 2012. The first Indian artist from Best College Art to win the residency in Scotland was Juhikadevi Bhanjdeo in 2012 followed by Yuvan Bothysathuvar in 2013, Chetnaa Verma in 2014, Krupa Makhija in 2015, Subir Hati in 2016 and Sitaram Swain in 2017.