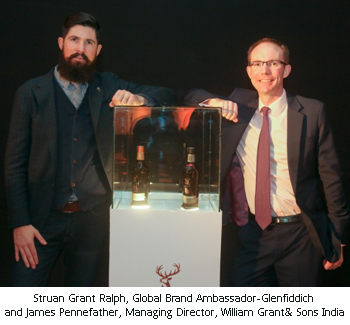 In what appears to be a tad unorthodox in the sphere of an established single malt brand, Glenfiddich has opted to introduce innovations with the launch of its Glenfiddich Experimental Series, in India last week. Glenfiddich’s Global Brand Ambassador, Struan Grant Ralph, launched two new limited edition variants, Glenfiddich Project XX (pronounced twenty’) and Glenfiddich IPA series, at an exclusive event.

Created from collaborations with like-minded mavericks from a wide range of different industries, the Glenfiddich Experimental Series focuses on using unique and innovative production processes to offer a new kind of malt whisky experience. Glenfiddich Project XX follows the first malt released from the series, Glenfiddich IPA Experiment; a Glenfiddich single malt finished in IPA craft beer casks carefully selected by Brian Kinsman and a local Speyside craft brewer. The Glenfiddich IPA Experiment is the first in the series where the world’s first single malt Scotch whisky finished in India Pale Ale (IPA) craft beer casks.This will include a number of unexpected variants over time. 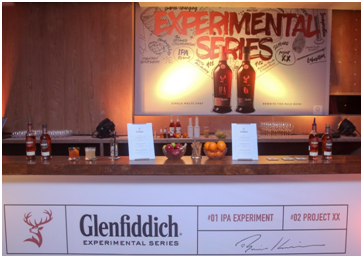 Glenfiddich Malt Master, Brian Kinsmanworked together with a local Speyside craft brewer, who shares a passion for innovative flavours, to pioneer a new single malt scotch whisky imbued with zesty citrus and tangy hops from the oak casks that had previously held a bold Speyside IPA. In the process of Glenfiddich crafting a new whisky for the Glenfiddich Experimental Series, the pair also created a brand new IPA craft beer.

Glenfiddich Project XX is the result of collaboration between 20 whisky experts and Glenfiddich’s Malt Master, Brian Kinsman, who developed one unexpected, extraordinary whisky by bringing together 20 very special single malts.Going against normal whisky making conventions, Brian invited 20 whisky experts from 16 countries around the world, to explore and each select a cask from a warehouse at the Glenfiddich Distillery in Dufftown.

This freedom of choice resulted in a 20-strong collection of some of the most unusual whiskies from Glenfiddich’s stocks, amassed and carefully nurtured throughout the brand’s 130-year history. After each expert had chosen a single cask of extraordinary liquid, from aged malts matured in port pipes to ancient sherry butts and first fill bourbon casks, Brian skillfully produced the final variant to reflect their individual tastes and interests. Expertly married together in a small batch vatting, the final liquid was exceptional – and a special tribute to each individual cask the malts came from.

Speaking on the launch in India, Glenfiddich’s Malt Master, Brian Kinsman said: “We’re thrilled to announce the new Glenfiddich Experiment variants launch India, and excited about the future possibilities with this Experimental Series. The idea behind the Glenfiddich Experimental series was quite unusual but one we were passionate about – we wanted to really play with the flavours to see what we could create. The Experimental Series builds on Glenfiddich’s long tradition of innovation and takes us to new levels of experimentation in a way no distillery has ever done before. Bucking the tradition of malt whisky being chosen and vatted by only a Malt Master, we set out to create an unpredictable whisky by involving 20 whisky experts in the process. The series we’re launching today is a recreation of that initial small vatting”.

The Glenfiddich IPA Experiment and Experimental Series will be available from 8th February at leading wine stores across Delhi and Mumbai.