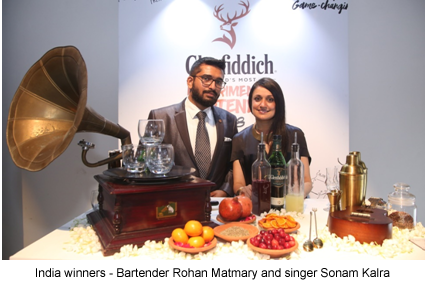 The single malt Scotch whisky brand Glenfiddich rececently hosted the third season of the World’s Most Experimental Bartender in Delhi. The concept of the contest is to bring together creative minds from different fields, who collaborate and develop an innovative interpretation of the Glenfiddich 12-year-old expression. The shortlisted bartenders were paired with collaborators from creative fields such as music, art, design, magic and hospitality to co-create their unique Glenfiddich serve. From among six collaborating participants from across India, bartender Rohan Matmary and musician Sonam Kalra’s pair stood out with their creativity and was selected as the India winners.Their ideas were presented before a panel of judges, comprising of MandiraBedi, Zorawar Kalra, Gaurav Gupta, Thukral and Tagra, Nikhil Arora, James Pennefather and Vikram Aditya.

The winning cocktail created by Rohan and Sonam was titled, ‘Zaara’, an Urdu word meaning ‘particle’. Zaara revolved around the message- that regardless of its proportion in the recipe, each ingredient is equally important and contributes towards creating the right balance. The cocktail Zaarawas made with Glenfiddich 12-year-old, infused with cranberry, tiny tangerines, egg white and sage infusion, hibiscus, and rhubarb, which resonated well with the fruity and floral notes of the Glenfiddich 12-year-old single malt whisky. 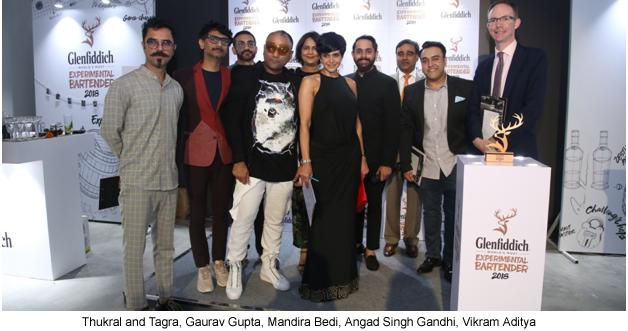 The wining duo will now go on to compete against other market winners on a trip to the Glenfiddich Experimental Bartender Academy in Scotland, where they will have the opportunity to bring their concept to life. The winner will be awarded with the title of ‘The World’s Most Experimental Bartender’ and Glenfiddich will, thereafter work with the winning duo throughout 2018 to showcase their creativity globally and bring it to life for on-trade.

The competition requires participating bartenders to collaborate with a master of another field to                co-create something unique inspired by Glenfiddich experience. Winners from countries around the globe namely- Australia; Switzerland; Germany; United Kingdom; United States of America; the United Arab Emirate of Dubai; Colombia; South Africa and India, will be invited on an all-expenses-paid trip to the Glenfiddich Experimental Bartender Academy in Scotland, where they will compete to win the priceless opportunity of bringing their idea to life, supported by Glenfiddich.

This competition is an intense and immersive three-day experience where the collaborators are taught how to make whisky from scratch. They will have the exclusive opportunity to absorb knowledge from Glenfiddich’s distillery experts; from the mash man to the cooper, the still man to the malt master; and these extraordinary craftsmen will share the techniques that have made Glenfiddich.