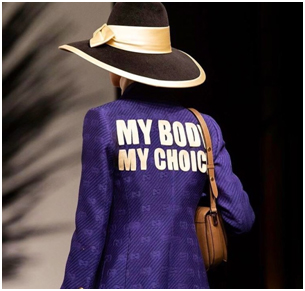 With Gucci Cruise 2020 show, Gucci creative director Alessandro Michele expressed many emotions, of nostalgia, pride in his history, freedom from stereotype, freedom to own your own body. The historic Capitoline Museum in Rome was a throwback to his childhood and growing years, and his ode to Roman history. Most importantly, he expressed his angst for the new law against abortions in Alabama, USA, by using the garments as posters with strong messages like “My Body, My Choice” on the back of a purple jacket, or the date when Italy legalized abortions, ‘May 22, 1978’ on a sweater. There was even a belted gown with the embroidery of a flowering uterus. He revisited the Gucci’s Chime for Change charity founded in 2013 supporting reproductive rights, maternal health and the freedom of choice, with ‘Chime’ on T-shirts. 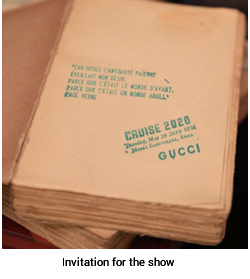 The looks were a mish mash of many elements, a metaphor for freedom from set norms, to love what appeals. And Michele Alessandro loves Mickey Mouse too, who was on a coat. There were togas over suits, fringed shawl over a velvet suit for men, Gucci color pallet of bright green, purple, bronze, white, silk, wool, plaid, tartan checks, suede, corduroy, velvet, narrow and flared pants, tartan shirts, classic looks. Everything and anything along with over the top accessories. Cards sent out for the show asked guests to visit a centuries-old book store in Rome,  Antica Libreria Cascianelli and exchange it for the invitation, an antique book, with a quote by historian and archaeologist Paul Veyne. “Car seule l’antiquité païenne éveillat mon désir, parce que c’était le monde d’avant, parce que c’était un monde aboli.” “Only pagan antiquity awakened my desire, because it was an advanced world, because it was an abolished world.” Important names spotted at the show were Elton John, David Furnish, Salma Hayek Pinnault, Naomi Campbell, François-Henri Pinault. 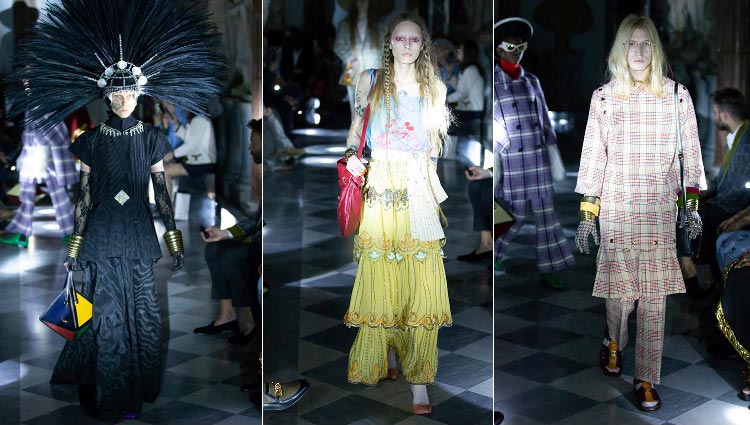