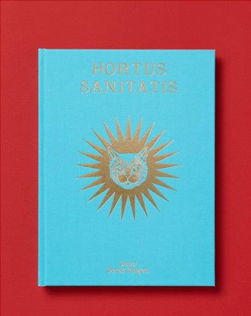 The Italian luxury label Gucci has announced the launch of the latest in its occasional series of limited-edition publications titled Hortus Sanitatis (Latin for ‘The Garden of Health’). The name is inspired by the first natural history encyclopaedia that was published in 1948 in Mainz, Germany.Priced at £75, ¥12,500, $95 and € 85, the title will be sold as of 5th July, and will be launched at the Comme des Garçons Trading Museum at 54 Rue du Faubourg Saint-Honoré, Paris with a book signing event that evening.

Predominantly a pictorial showcase of the Gucci pre-fall 2017 collection, it is shot by one of London’s most influential club and street photographers, Derek Ridgers. The book takes the form of a series of informal pictures of models accompanied by animals such as cats and snakes. The shooting took place in Rome, and its historical spaces that have remained untouched for centuries, such as the old apothecary Antica Spezieria di Santa Maria della Scala; a beautiful library Biblioteca Angelica,which is filled with rare, ancient manuscripts, and Antica Libreria Cascianelli, a sprawling archive of books and pieces of art.

Derek Ridgers first came to notice as a photographer of the punk scene in London in the 1970s and is best known for his images of musicians, club and street culture, as well as his portraits of actors. In Hortus Sanitatis, Ridgers’ images have the raw energy of his early work documenting bands like Siouxsie and The Banshees, The Damned, The Ramones and Adam & The Ants.

Distributed by IDEA, the London-based independent publisher, Hortus Sanitatis is limited to 1,000 copies and comes in a dedicated red cotton pouch displaying a skull and crossbones. It is printed with gold-gilded page-edges and gold foil details on the cover.

After the launch in Paris, Hortus Sanitatis will be on sale throughout the world at selected stores: