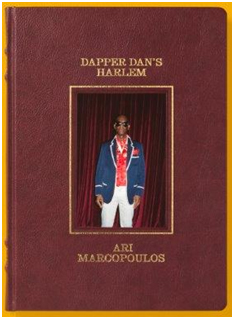 Gucci has now established its publishing credentials firmly, with the launch of its second book titled ‘Dapper Dan’s Harlem’, at the Pitti Uomo in Florence on 8th January. Dedicated to the famous New Yorker Daniel Day from Harlem, who became the symbol of gangster chic, the new limited edition book is shot by photographer Ari Marcopoulous, who has documented his journey through Harlem, Dapper Dan’s home and the location of his eponymous atelier, which Gucci helped the legendary couturier to reopen in December 2017. Dapper Dan or Daniel Day was present at the launch for signing of the book.

The book also has a host of original images shot on location in Harlem, including portraits of friends of the House and Dapper Dan, such as artist, director and designer Trevor Andrew, artist, poet and author Cleo Wade, restauranteur and Harlem chef Marcus Samuelss on, and businessman and author Steve Stoute.

This is the second book for Gucci by Ari Marcopoulos. In 2016, Gucci released ‘Epiphany’, a limited-edition title featuring images captured during a shoot that took place in a palazzo in Milan to document the Pre-Fall 2016 Gucci Collections for women and men, designed by Creative Director Alessandro Michele.

Priced at €180 (£175; $200), Dapper Dan’s Harlem will be limited to 500 copies through IDEA, the London-based independent publisher. It will also be available at Gucci Garden in Florence and the Gucci Wooster Bookstore in New York.