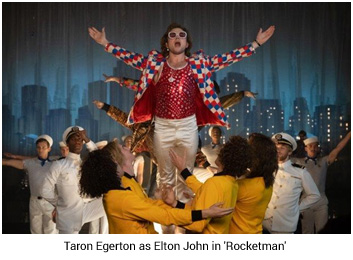 At the recent Cannes Film Festival, the musical ‘Rocketman’, a film on the formative years of the life and times of Sir Elton John, the famous English singer, songwriter, pianist, and composer, held its premier. The film follows the fantastical journey of transformation from shy piano prodigy Reginald Dwight into international superstar Elton John. Gucci has an on-going relationship with the iconic musician,which began last year with a series of looks created for the Spring Summer 2019 fashion show taking inspiration from pieces in the musician’s personal archive. There followed totes featuring record-cover art from the artist’s back catalogue, and then the House was invited to create the entire wardrobe for Elton John’s three-year final tour, the global Farewell Yellow Brick Road performances. In the movie too, Taron Egerton, in the role of Elton John, wears selected outfits from Gucci.

The British rock icon was known for his quirky eyewear. Gucci has stepped in by creating two models of sunglasses,   to celebrate the magnetic personality of Elton John. The sunglasses are inspired by the peacock style and audacious personality that resonate with the extravagant wardrobe of this showman. The first style of sunglasses has a heart shape and a shiny, dark blue glitter frame decorated with Swarovski crystals, and solid cherry lenses. The second one is an oversized square model with a shiny, solid blue frame decorated with tangerine-coloured Swarovski crystals, and gradient orange lenses.

Both styles of sunglasses will be available in selected Gucci stores worldwide from May 2019.