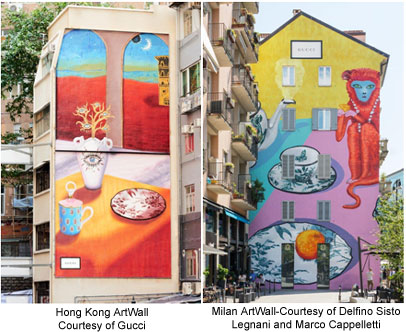 Merry developed imagery for the Gucci Décor debut in 2017, and now this special relationship with the House continues with the creation of illustrations depicting new styles and pieces.

Executed in New York by Colossal Media, and in Milan and London by the European leader in out-of-home advertising, Urban Vision, the new ArtWalls are respectively located on Lafayette Street in Manhattan’s SoHo neighbourhood, in Milan’s Largo la Foppa (in the district of Corso Garibaldi), and just off East London’s famous Brick Lane. The Hong Kong installation is on D’Aguilar Street, in Lan Kwai Fong, while the Shanghai mural is located in Fengsheng Li, Jingan district.