The fashion week frenzy is subdued in these months. The summer heat is putting to test, all the designer lines, which were actually conceived in winter.I made my in-season analysis and the retrospection report, unaffected from the hype that surrounds the event before and after.

At a fashion week not every collection and show scores a perfect 10. There are bound to be some that could just fall short in spite of the many highlights announced before the showing. At Lakmé Fashion Week Summer/Resort 2016 the overall collections were eye-catching with some scoring high on the fashion charts while a few could have given more thought to the overall look of the collection. 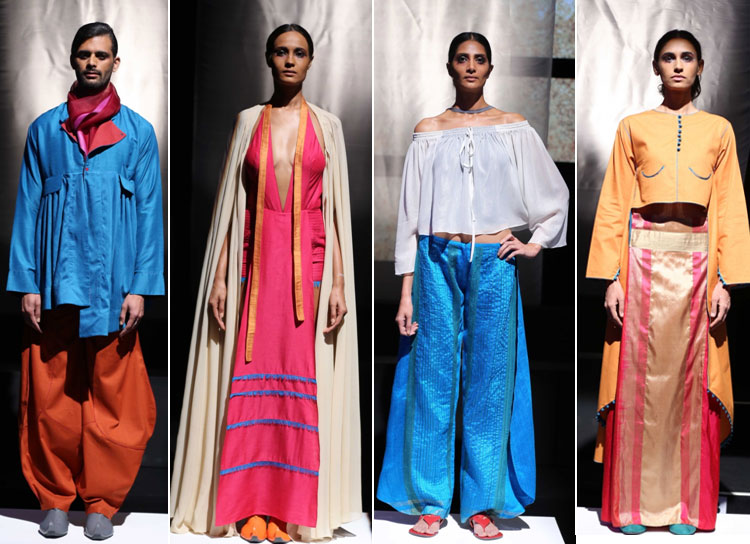 The ‘Indica Emporia’ presentation was not only unique in its display but the fabulous garments painstakingly put together by the creative innovative Wendell Rodricks made a dramatic impact. The main show area was turned into a museum with models posing on pedestals. The garments were an intriguing mix of traditional and contemporary silhouettes where ghagras were turned into regal capes and pajamas looked glamorous as off-shoulder blouses. Dhotis took a new avatar as saris; while cholis were elongated. The colours were a riot of fuchsia, ivory, indigo, Jamun, pomegranate, purple, peacock blue and green, haldi, saffron and turquoise. The luxe fabrics included khadi, cotton, silk, tussar, mugha, noile, Dupion and organza. The show was the most memorable seen at a fashion week. 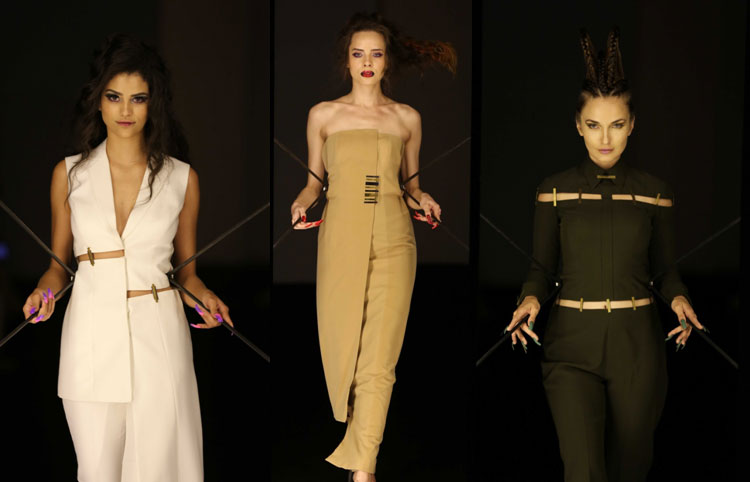 The designer has been known to create something ‘hathke’ on the ramp but this time Nikhil Thampi’s ‘Quantum’ collection inspired by the Lakmé Salon Illuminate makeup and hair looks was one of the best in his career. Extreme construction was seen for blazers, pants, tops, gowns, skirts and dresses all highlighted with metal tabs that appeared at strategic places of the garments. From earthy tones starting with white, beige and black there was a marked shift in the colour story to bright jewel shades like tangerine, red, blue, deep green and dusty pink. Bringing a certain touch of asymmetry to the hemlines, the collection was stunning in appearance and sharp in silhouettes, with a look that left a lasting impression. 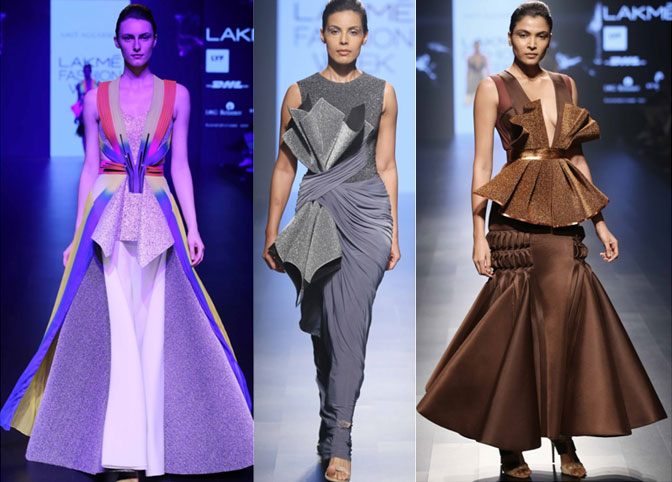 One can expect the most intricate construction from Amit Aggarwal and the designer did not disappoint. His ‘Magma’ collection was a symphony in Neoprene, industrial fabrics, quilting, pleating, draping, and featuring beading, hand painting, pin tucking with metallic highlights for cascading ruffles, folds that turned the cocktail dresses and gowns into show stopping entries. The collection transformed from a neutral landscape to a colourful world full of paint forming a psychedelic dream. The surfaces reflected structural influences with fluidity and lightness. 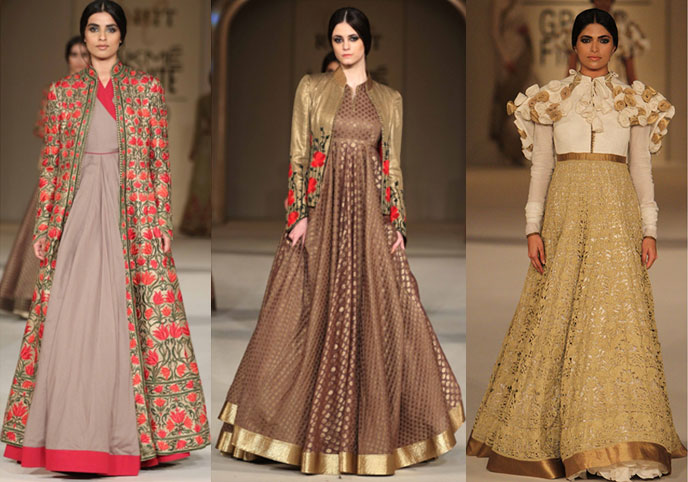 For grandeur and opulence not many can beat RohitBal. His collection ‘Koroshni’ (illuminate) inspired by the Lakmé Absolute new Illuminate line was a breath-taking presentation against the dazzling backdrop of the heritage arches of St Xavier’s College and the stunning 3D background mapping. His multi-tiered/fabric floor skimming tents maybe a permanent fixture for every show but Rohit has learnt to reinvent them for years and hold the attention of the audience. The embroidery of roses, flowers, leaves, Chand (moon) and flowing vines motifs was an amazing tribute to expert craftsmanship. The overall impact was pure regal ultra-sophisticated couture that was museum worthy for its timeless beauty. 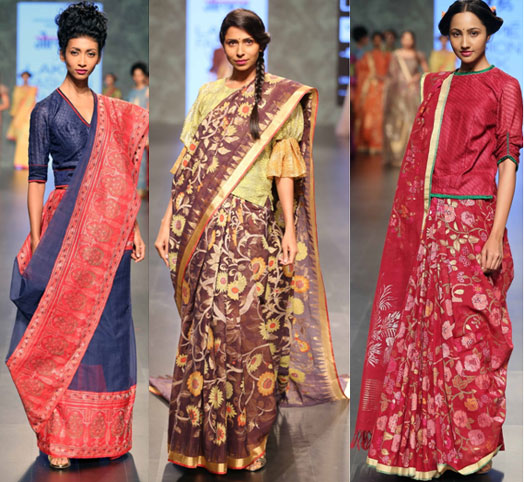 When it comes to presenting the sari in all its splendour, few can beat Gaurang Shah and the designing duo Swati and Sunaina. The former called his collection ‘Calico’ and presented exquisite khadi, Uppada and Kota, using the Jamdani technique and emphasising the rich and vibrant history of Indian craftsmanship and weavers. 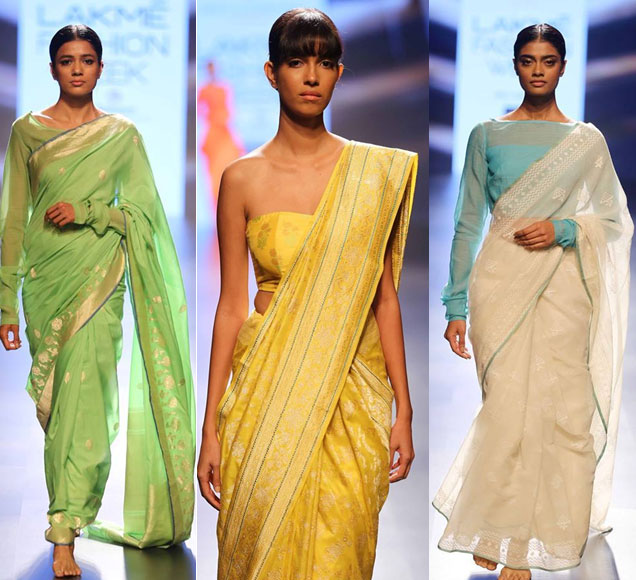 The latter duo called their line ‘The Lightness of Being Radha’. The intricate textiles revealed the grandeur of weaves in patterns and colours like white, old rose, green, ivory, yellow, chutney, red and gold for the leaves, stalks flowers and frisky grasshopper motifs. Here were saris that will be heirlooms for generations. 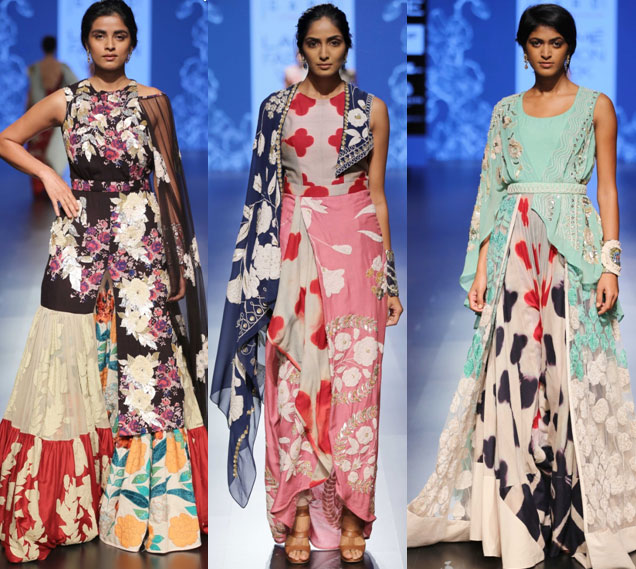 It was difficult to understand the collection ‘Femme de Tahiti’ by the duo PriyangsuMaji and SwetaTantia for their label ‘Garo’ named after the Assamese Tribe.  The rich Chanderis, cotton, matko, woven bapta silk and chiffon for the bridal collection with bohemian vibes attempted to work the glamour of Tahiti. But instead the line had broken silhouettes of several unfinished pieces, which created a puzzle that would be difficult to solve sartorially. Were they Indian, western or fusion? Was everything that fashion offered piled onto each garment? Control over creativity was unheard of. Maybe if some of the OTT detailing was eliminated, the Tahitian inspired garments would have translated into pleasant evening wear. 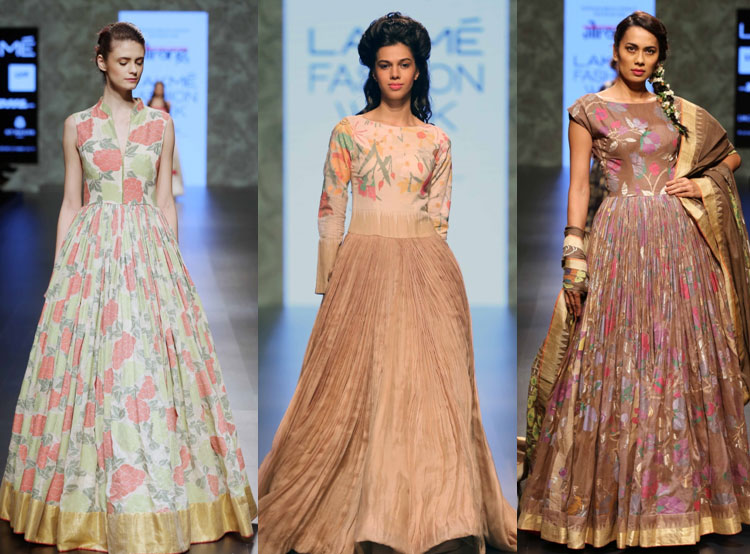 How can a designer, feature in both the Hits and Misses segments during the same show? Well Gaurang Shah achieved this with his ‘split personality’ collection. The opening saris were sensational beauties but the latter half of the collection featuring silhouettes from the ‘Belle Epoch’ period was where Gaurang faltered when he attempted to turn the traditional Indian textiles into historic western silhouettes. The 20th century colonial rule in India inspiration was a total misfit for the fabrics, which were supposed to evoke the grandeur of the Maharani Era but failed do so, on all counts. The section also proved that tailored couture was not Gaurang’sforté. An endless stream of monotonous gowns created a disappointing end to a fabulous earlier collection. 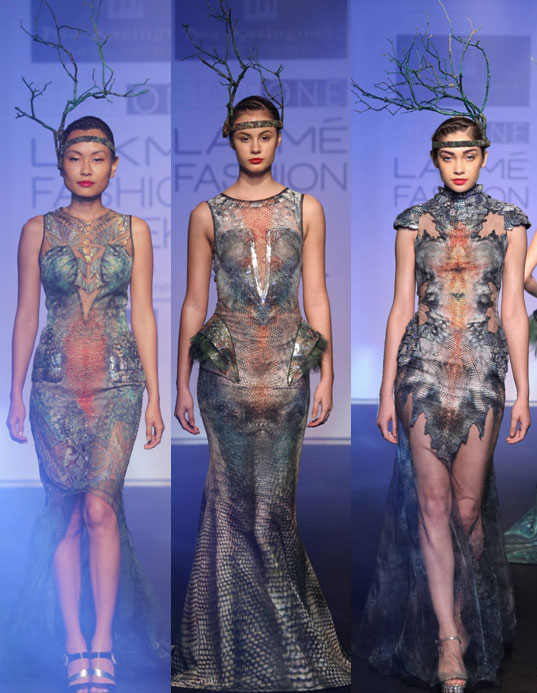 Here is a designer who creates amazing outlandish garments but for whom? For a mediaeval costume drama they were perfect. For dramatic stage performances they were ideal. Called ‘Repnotic’ it left a lot to be desired even though the inspiration was very heavy duty with Mother Nature being at the centre and the Iguana. A use of satin, lace, crystal, net and a touch of golden leather was seen throughout the creations yet there was the X factor that was missing.   On the Red Carpet only Lady Gaga or NikiMinach would be able to carry them off but in India the nightingales who croon won’t be able to so on or off the stage, nor will the Bollywood beauties have the courage to look like extra-terrestrial beings wearing one of the futuristic creations by AsaKazingmei. 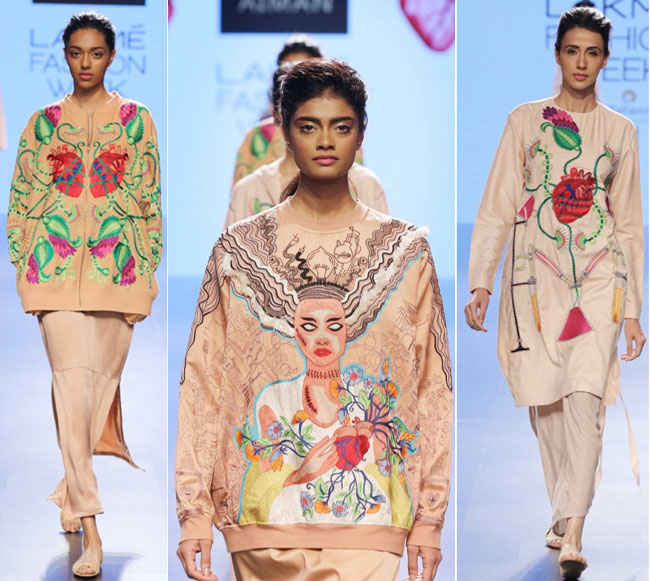 In the past there was a partner ArmaanRandhawa, but the split between him and Aiman Agha left the latter apparently heartbroken as the message was sent out by the lady for her collection called ‘Re-make’. It was an artistic experimentation of symbolic motifs of love and struggle in the form of a fashion documentation of a short love story with Frankenstein’s love tale as an inspiration. Featuring the organic heart motif as print or embroidery on the garments, may work for the lovelorn who want to wear their hearts on their sleeves but this collection was a far carry from the Lakmé Fashion Week Winter/Festive 2015 ‘Eclipse’ line that Aiman created with Armaan. The utterly beautiful feminine take on the inspiration by Aiman Agha and ArmaanRandhawa for their label ‘ArmaanAiman’ at Lakmé Fashion Week Summer/Resort 2015 was also a lovely collection. Maybe after the healing period, the lady will be back in top gear with both ‘heart and soul’ in her collection. 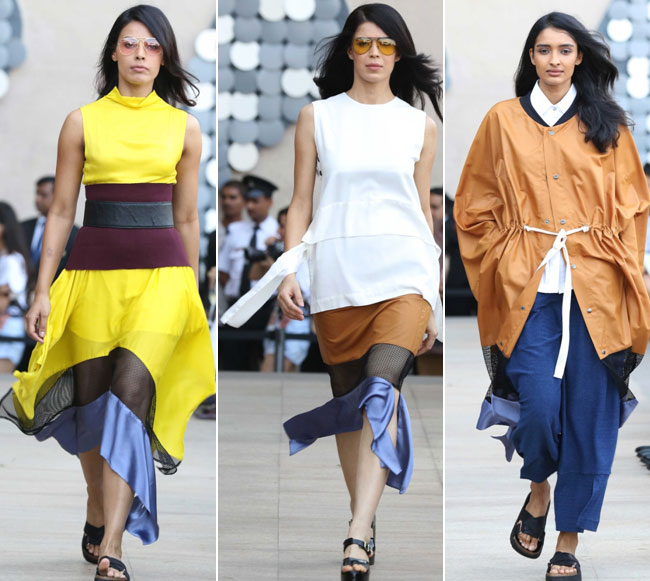 He made an impressive entry on the fashion scene in the Gen Next section during Lakmé Fashion Week Winter/Festive 2014. Since then he has been active at fashion weeks every season. In March 2016 however Dhruv Kapoor pushed his creativity to the limits and showed at the Amazon India Fashion Week Fall/Winter 2016 and Lakmé Fashion Week Summer/Resort 2016 within a span of a few days.  The AIFW F/W 2016 collection was a heavy weight line of solid winter wear with woollen coats, jackets, trousers, dresses, capes, faux fur, leather all aimed at the international buyers.  But moving from one season to another within days can cause a creative schizophrenic block and shock for even the most talented genius. The collection for Lakmé Fashion Week Summer/Resort 2016, the claimed was an extension of his ‘discreet luxury’ concept but moved along with spasms, trying to grasp at a vision, which seems to move further away. Shown around the pool side of the St Regis Hotel, it was a line that could have worked had Dhruv Kapoor struck to one seasonal path instead of moving from North to East at jet speed.