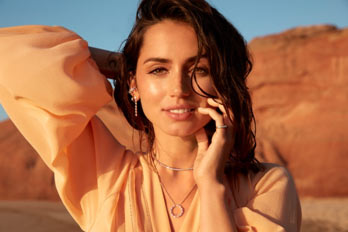 IMDB, the digital aggregator of films, television shows and web series has chosen Hollywood actor Ana De Armas in their annual list of Top 10 Stars 2020 among other A-listers under the “Breakout” category. She was last seen making an appearance for Natural Diamond Council’s consumer campaign, ‘For Moments like No Other’ as their global brand ambassador.

Ana is a rising Hollywood star. She has received a Golden Globe nomination for her role in Knives Out and will soon appear as The Bond Girl in the latest James Bond film ‘No Time to Die’.

Owned by Amazon, IMDb’s process of selecting the Top 10 rankers for lists,uses data from IMDbProSTARmeter rankings, which are based on the actual page views of more than 200 million monthly visitors to IMDb.

Matt Kumin, Head of IMDbPro was quoted to have said, “With more time at home this year than ever before, entertainment played a huge role in our lives, and people around the world turned to IMDb to discover and decide what to watch and learn more about the stars of their new favorite shows and movies.Our lists of the Top Stars and Breakout Stars highlight the actors and actresses our fans and professional customers were most excited and curious about this year. We congratulate our Top Star Ana de Armas and Top Breakout Star Anya Chalotra on their truly phenomenal rises on the IMDbPro STAR meter chart this year.”

The Natural Diamond Council’s campaign ‘For Moments Like No Other’ is their first-ever consumer campaign with a Hollywood ambassador. It was created with the insight to celebrate the myriad connections that lead to natural diamonds being worn or exchanged. Ms. de Armas in the TVC epitomizes an ascendant, free-thinking generation while radiating poise and modernity. Her elegant, effervescent, and easygoing demeanor reflects the next chapter in the history of natural diamonds; a mindset in which the traditional tenets of diamond-wearing and exchanging are dismantled, leaving an open playing field in their place.

India – Jaipur Literature Festival 2022 to be