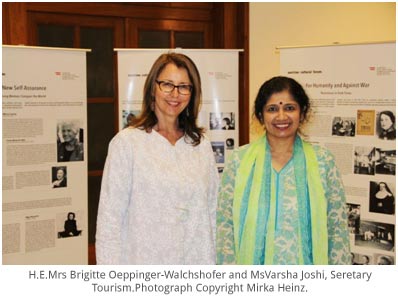 The Austrian Cultural Forum of the Austrian Embassy, along with Delhi Tourism, organized the launch of a touring exhibition, “Inspiring Women – Austria and India” (Calliope Austria), at the residence of the Ambassador (Designate) of Austria, H.E.Mrs Brigitte Oeppinger – Walchshofer, on the 25th August, 2017. Ms Varsha Joshi, IAS Secretary Tourism, Delhi NCT, Government of Delhi, was the Guest of Honour, who lit the lamp along with the Ambassador.

Created by the Cultural Department of the Federal Ministry of Europe, Integration and Foreign Affairs of the Republic of Austrial, the Exhibition attempts to project the life stories of important Austrian 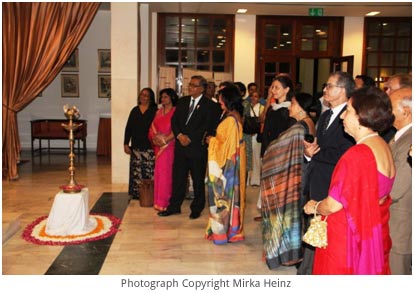 women of the past 200 years. Women have far too often been forgotten, overlooked and marginalized irrespective of period, geographical boarders and cultures. But yet their lives and their works have been found quite exemplary and source of growth, development, expansion and improvement for the society in general.To express a more bilateral view on this subject the Austrian Cultural Forum tried to extend the exhibition with women in Society, Culture and Science of India.

The name “Calliope” was the Greek mythical goddess, who was the muse of academic study, philosophy and poetry, and revered as the oldest and wisest of the nine classical muses. 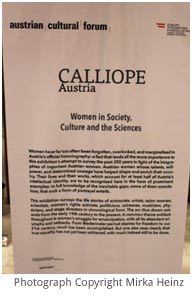 Some of the women from Europe are Maria Theresia, who was theEmpressand Regent of Austria (1740–1780) and Queen of Hungary and Bohemia (crowned);Eva Geber, a graphic designer, author, reviewer; for 35 years co-publisher of the feminist journal AUF, co-founder of the AUF edition in Vienna (1992), AugusteFickert, Women’s rights campaigner and social reformer.

In order to reach out to the masses this exhibition has been envisaged to be kept away from the conventional walled galleries and venues and to showcase the same in public spaces. The official partner Delhi Tourism has joined hands in this unique endeavour 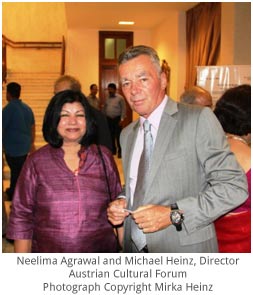 and agreed to project these touring Exhibitions in all Dilli Haats and Garden of Five senses.

Schedule of public display is as follows.