Designer Manish Arora has been awarded France’s highest civilian award, Chevalier de la légion d’Honneur, in recognition of his renowned and critically acclaimed work and contribution to the world of fashion. His Excellency, The Ambassador of France, Francois Richier, conferred the award at the investiture ceremony hosted at the Residence of France. 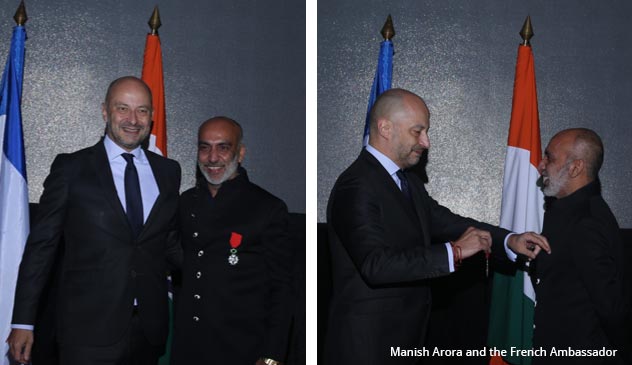 The Chevalier de la légion d’Honneur is France’s premier award to recognize eminent accomplishments of service to France. The award, being the highest distinction in France, is bestowed on both citizens of France as well as foreigners. In the past, eminent personalities such as Pandit Ravi Shankar, Amitabh Bachchan, JRD Tata and Shah Rukh Khan have been honoured with the prestigious award.

Close friend and the Fashion Features Director of Vogue, Bandana Tewari narrated a personal note on Manish’s journey from growing up in Malad, the suburban neighbourhood of Bombay to becoming the most inspiring and distinguished designer in the world. A short video highlighting the different moments over the years of  Manish’s career was played to honor the designer, followed by the medallion bestowed on Manish by the Ambassador of France. Some of the faces from the world of fashion, business, arts and the media including, Ambika Pillai, Subodh Gupta, Rajeev Sethi, Kalyani Chawla, Rahul Mishra, Priya Paul, Rajesh Pratap Singh amongst others were present at the do. 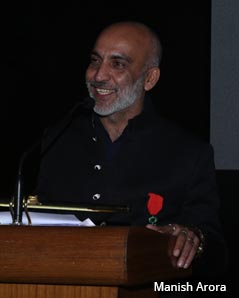 Speaking on the occasion Manish Arora said, “I’m thrilled and honoured by the recognition I have received from the country that I love with all my heart. France has been an inspiration always. I now live between Paris and Delhi and for me France is literally my own country. I hope to keep getting inspired by France, the beauty and elegance of the French people.

Pinning the insignia on the celebrated designer, Ambassador François Richier said, “Manish has a long-standing connection with France, which is like a second home for him. He is a pioneer in bringing the fashion culture of both countries together with his exuberant imagination. I am delighted to confer this high honour on him.”