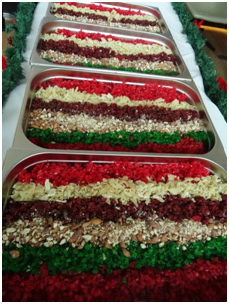 Reporting from the Plaza Premium Lounge located deep inside the T3 terminal of Indira Gandihi International Airport, which marked the beginning of Christmas festivities with the age old traditional ‘Cake mixing ceremony’ across all its India locations. Chopped dried fruit, nuts and spices are mixed together with a heady combination of wine and drinks.

The festivity at the Delhi Airport Lounge was led by Chef Ankit Mangla, Executive Chef for Plaza Premium Lounge India.  The Chef along with his team and members of the Premium Plaza Lounge was joined by  Mohan Limbu, Country Manager, Plaza Premium Lounge, India who lend a helping hand in mixing the cake to kick start the happiness for the coming festive season. The occasion was also graced by team members from various Airlines at the airport.

Mohan Limbu said, “Every year we organize the Cake Mixing Ceremony to mark the beginning of the joyous Christmas season and also to soak the Christmas Plum Cake mixture which will be served to all our guests with love and care during Christmas. It is a pleasing sight to see all the team members coming together and participating in the event with full enthusiasm.”

“To make a perfect Christmas Plum cake, we need to do lot of planning in advance,”said Ankit Mangla, Executive Chef, Plaza Premium Lounge India. “All the cut dry fruits should be mixed really well with the spices so that the flavour is well absorbed. When mixed in advance, it allows the fruits to become moist, juicy and absorbed all the goodness of Rum. ” 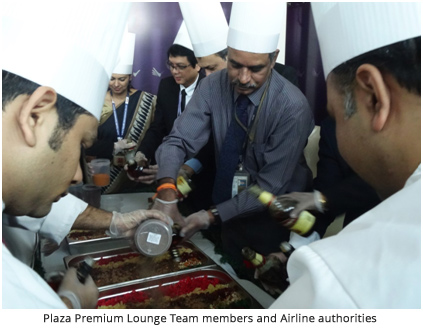 The assortment for the cake mixing included a wide array of ingredients like almonds, cashew nuts, black currents, sweet ginger, walnut, candied fruit, candied glazed cherry, orange peel, figs and raisins. The lounge was engulfed by the heavenly aromas of sweet spices combined with the heady aroma of rum and brandy which helps in soaking the fruits and spices for the mix to mature beautifully.

The mix will be sent out to their kitchens where Chef Ankit and his team will use it to make Christmas Plum Cakes for the guests at the lounge. Similar cake mixing ceremonies were also held at Plaza Premium lounges in Bangalore and Hyderabad.

This is the first airport lounge network to achieve ISO 9001:2008 certification and the World’s Best Independent Airport Lounge by Skytrax.