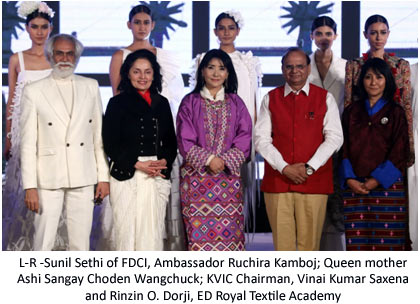 The Indian Embassy in Bhutan, in collaboration with the FDCI and MSME-KVIC (Khadi & Village Industries Commission) from Indian and Royal Textile Academy, Bhutan,organized a unique textile showcase in Thimphu in celebration of 150th birth anniversary of Mahatma Gandhi. The event Khadi-Thagzo, heldon 16th October, at the Royal Textile Academy, Thimphu,celebrated the hand-woven textile traditions of the two countries with leading Indian designers and Bhutanese designers presenting their limited collections in both the textiles. Ambassador of India to Bhutan, Ruchira Kamboj, hosted the celebrations and showcase. The Chief Guest of the event was Queen mother Ashi Sangay Choden Wangchuck and other distinguished members of the Royal family of Bhutan – Princess EuphelmaChoden Wangchuck and Ashi Deki Yangzom Wangchuck, along with Prime Minister of Bhutan Lotay Tshering. Also present were KVIC Chairman, Vinai Kumar Saxena, FDCI Chairman, Sunil Sethi and its Board of Directors. 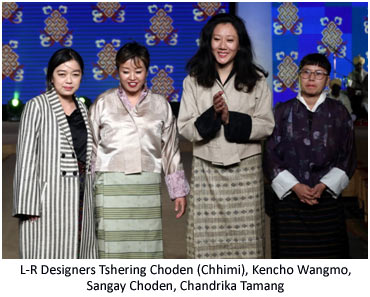 Ambassador of India to Bhutan, H.E. Ruchira Kamboj said, “The night is not just about glorious textile presentation but also about the opening of new collaborations.” FDCI Chairman Sunil Sethi said, “We are grateful to the Indian Embassy, for hosting 50 talents from designers, choreographers, makeup artists to models for this unique presentation. The Indian Embassy and the Royal Textile Academy of Bhutan will send a team of Bhutanese designers which will be part of the Lotus Make-Up India Fashion Week in March next year and we hope this is just the beginning of a long and fruitful association.”