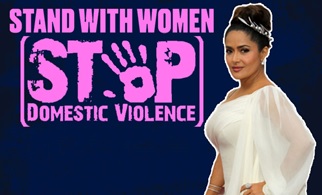 The co-founder of CHIME FOR CHANGE and Board Director of Kering Foundation, Salma Hayek Pinault launches #StandWithWomen campaign benefitting nonprofit partners worldwide. The initiative is launched in view that women and girls are disproportionately affected during times of crisis, and the COVID-19 pandemic has intensified underlying gender inequities, including violence against women. Building on its ongoing efforts to help fight COVID-19 outbreak, Gucci, through its CHIME FOR CHANGE initiative,  and the KERING FOUNDATION have joined forces for #StandWithWomen, a new campaign to expand funding for nonprofit organizations on the frontlines of supporting women and girls around the world, and addressing gender-based violence during the COVID-19 pandemic. 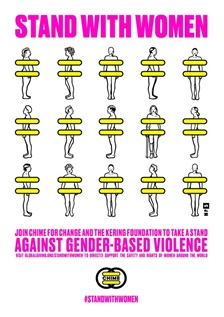 The campaign follows donations from Kering, Gucci’s parent company, and its Foundation, in China, Italy, France and the US, and Gucci’s € 2million donation under the call to action “We Are All In This Together”. The #StandWithWomen campaign was announced today by CHIME FOR CHANGE Co-Founder and KERING FOUNDATION Board Director Salma Hayek Pinault with a video message calling for the global community to unite with women around the world and take a symbolic ‘stand’ against gender-based violence, especially during this time when access to health services and other resources is limited.

“Now more than ever is the time to join together to protect the health, safety and human rights of girls and women around the world,” Hayek Pinault said. “We stand in solidarity with women everywhere to put a stop to gender-based violence. We stand in solidarity with women everywhere because we cannot risk the progress we have made in the long fight for gender equality.” 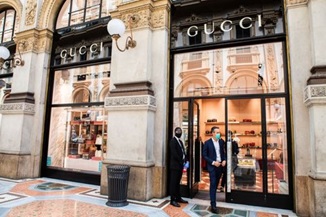 Expanded funding from CHIME FOR CHANGE and the KERING FOUNDATION to nonprofit partners working with grassroots organizations on the frontlines will allow these partners to continue their critical work mobilizing for the safety, health and justice of all women, including women of color, transgender women, Indigenous women and disabled women.

Through crowdfunding partner Global Giving, CHIME FOR CHANGE and the KERING FOUNDATION invite supporters around the world to join the campaign and directly contribute to #StandWithWomen at a dedicated webpage, globalgiving.org/standwithwomen.

Nonprofit beneficiaries of the #StandWithWomen campaign include:

#StandWithWomen is the latest commitment from Gucci in a series of initiatives from the House to convene the global community in the fight against COVID-19. In March 2020, under the call to action of “We Are All In This Together”, Gucci supported two crowdfunding campaigns:

In response to needs expressed by its partners in the United States, France, Italy and the United Kingdom, the KERING FOUNDATION has distributed emergency funds to organizations and charities that support survivors of domestic violence, enabling these groups to continue their work. The Foundation has also launched an awareness campaign entitled #YouAreNotAlone, to provide information and tailored resources for women who are survivors of domestic violence and to point them towards specialist organizations in Europe and the United States that can provide support to them. In France, One In Three Women, the first European network of companies committed to combating violence against women, which the Foundation co-founded in 2018, launched an awareness-raising and fundraising campaign for the Fédération Nationale Solidarité Femmes to ensure local organizations will have sufficient resources to support survivors of violence during and after lockdowns have been lifted.

Now, through #StandWithWomen, Gucci and the KERING FOUNDATION aim to confront the systemic issues affecting girls and women that have been exacerbated by this public health and economic crisis. Due to the current impact of the pandemic, as well as anticipated longer-term reductions in resources globally, without action and support for women-led organizations, the hard-fought gains made towards achieving gender equality are at real risk of regressing. To ensure progress towards a gender-equal future continues, Gucci and the KERING FOUNDATION are calling on the global community to take a symbolic stand in solidarity with women and girls around the world.

To learn more about #StandWithWomen and to directly support the campaign’s nonprofit partners, visit: globalgiving.org/standwithwomen

CHIME FOR CHANGE was founded by Gucci in 2013 to convene, unite and strengthen the voices speaking out for gender equality globally, with a focus on Education, Health and Justice. To date, the campaign has raised nearly $17 million to support projects and advocacy in 89 countries, through the funding of 430 projects with 160 nonprofit partners. CHIME FOR CHANGE aims to inspire participation in a collective community, bringing people together across borders and generations in the fight for equality.

Worldwide, 1 in 3 women is or will be a victim of violence during her lifetime. Since 2008, the KERING FOUNDATION combats this violence that affects all cultures and all social classes. The Foundation supports local survivor-centered organizations that provide comprehensive services to women, and works with younger generations, particularly young men and boys, to combat violence against women through prevention programs, the American continent, Western Europe and Asia. The FOUNDATION also seeks to change behaviors within Kering and in society in general. It offers training sessions on domestic violence for Kering employees and created, in 2018, alongside the FACE Foundation, “One in Three Women”, the first European network of companies engaged against gender-based violence.