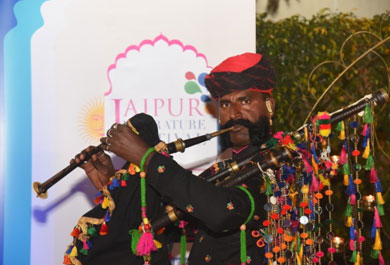 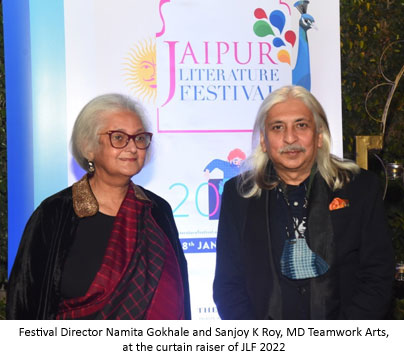 The high point in the calendar of book-lovers, the annual Jaipur Literature Festival is adapting to the prevailing circumstances of the pandemic outbreak, and is adopting a hybrid format with both on-ground and on-line events spread over ten days. Schedule of the on-ground event in Jaipur is 28th January – 1st February, 2022, and the online program will be until 6th February, 2022.

This year, the Festival will host over 250 speakers, writers, thinkers, politicians, journalists and popular cultural icons from across a vast array of nationalities, representing 21 Indian and international languages as well as major awards such as the Nobel, the Booker Prize, the Pulitzer Prize, the SahityaAkademi, the Padma Bhushan, the Padma Shri, the DSC Prize for Literature, the JCB Prize for Literature and many more.

Some highlights from the programme include one of Africa’s greatest living writersNobel Laureate Abdulrazak Gurnah who wontheNobel Prize for Literature in 2021 for his novel Afterlives.  At the session titled ‘Noise: A Flaw in Human Judgment’, another Nobel Laureate, Daniel Kahneman joins professor Olivier Sibony and legal scholar Cass R. Sunstein in a conversation on the topic. Nobel Laureate Abhijit V Banerjee will be in conversation with artist and illustrator Cheyenne Olivier to discuss his cookbook Cooking To Save Your Life. The 2021 Booker Prize winning author Damon Galgut will discuss his latest work The Promise. Booker Prize-winning author DBC Pierre’s recent and riotous novel, Meanwhile in Dopamine City, will be under discussion. British writer and translator Deborah Smith, whose translation of Korean author Han Kang’s The Vegetarian won the Man Booker International Prize in 2016, will be  in conversation with translator Arunava Sinha. Former CEO of PepsiCo Indra Nooyi, author of her memoir, My Life in Full: Work, Family, and Our Future, will be in conversation with author Aparna Piramal Raje.  In conversation with Seema Goswami, celebrated Indian actress Neena Gupta will discuss Gupta’s candid autobiography, Sach Kahun Toh.

Bringing a historical flavour to the programme,  historian Manu S. Pillai and writer and politician Dr. Shashi Tharoor will get into a conversation with author Ira Mukhoty. Pillai will also be in conversation with researcher and writer, Anirudh Kanisetti. The Festival will feature another interesting conversation between leading Indian art historian and recipient of the Padma Shri and the Padma Bhushan, BN Goswamy and historian, author and with Festival Co-Director William Dalrymple.

British biographer and literary agent Andrew Lownie’s The Mountbattens: The Lives and Loves of Dickie and Edwina Mountbatten is an intimate story of an unusual marriage in a family of great intrigue. Lownie illustrates the powerful partnership between the last Viceroy of India, Dickie, and the magnetic, wealthy and universally-loved Edwina. In conversation with historian and author Narayani Basu, Lownie will reveal the veracity behind the legends of the Mountbattens.

Writer, columnist and curator Sujata Prasad‘s co-authored biography, The Dream of Revolution: A Biography of Jayaprakash Narayan,will be discussed along with historian and author Narayani Basu and Indian sociologist and public intellectual Dipankar Gupta.

The audience will also witness a session which looks at the relations between India and Bangladesh and examines the socio-political, cultural and economic way forward to fuel and support the rich diversity of the two neighbouring countries, and commemorating 50 years of Bangladesh’s Liberation War. Eminent Bangladeshi journalist Mahfuz Anam is the editor of The Daily Star, Bangladesh’s foremost English language daily newspaper. He will be in conversation with the author of The Bengalis: A Portrait of a Community and The Eastern Gate, Sudeep Chakravarti. Former diplomat and columnist Pinak Ranjan Chakravarty will also be a part of the session.

Writer, screenwriter and activist Farrukh Dhondy will be In conversation with film and theatre director Arghya Lahiri, co-author of Dolly Thakore’s unapologetic memoir. Arundhathi Subramaniam, an award-winning poet, author and critic, will discuss the confluence of literature, culture and yoga, the ultimate practice and meeting-place for individual consciousness and the universe. Tishani Doshi’s exquisite collection of poetry, A God at the Door, is a voyage across time and space, drawing from nature and humanity to give power to the marginalised, heal trauma with beauty, and portray diverse voices, images, people and places with piercing clarity. Doshi will discuss her extraordinary book of poems. In the session title ‘The Great Mughals and the Moment of Portraiture’ independent art historian Ursula Weekes will be in conversation with author and historian Yashaswini

India – The Sacred, Pushkar 2016 festival of