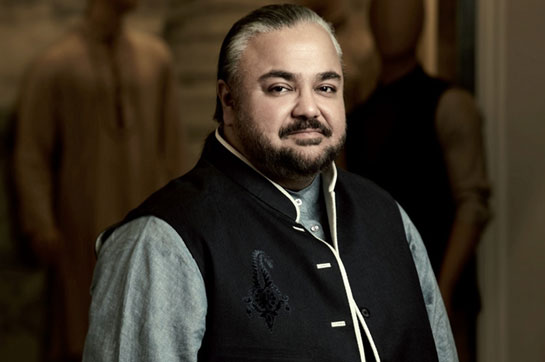 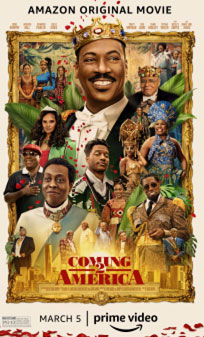 Eddie Murphy’s sequel of the 1988 mega hit American comedy ‘Coming 2 America’ released last month on the Amazon Original movie. While the plot failed to connect with the audience, the one big redeeming feature was the grand costumes worn by the royalty of the imaginary kingdom Zamunda, some of which were created by our very own JJ Vallaya.

Not many will be aware that Jagsharanjit Singh Ahluwalia popularly known as JJ Valaya spent his early years doodling and sketching, till the National Institute of Fashion Technology took him under its fold and moulded him into one of the most dramatic and extravagant, pioneering designers in India. 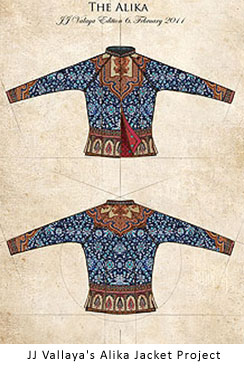 He was the institute’s star pupil and in 1990 won, the Prix D’Incitation presented to the best India n designer at the Young Designers’ International competition organised by the Federation Francaise de La Couture in Paris co- sponsored by Air France. After that there was no stopping JJ as his friends call him, when he went on to win the Elyxa Award at the National Institute of Fashion Technology graduation show in 1991 for the most aesthetic and innovative use of fabrics. He then also bagged the Thapar Dupont medal for 1989-1991 at the same show. J J then followed this up with the KLM Cargo Prize for the Best Collection in 1993.

These awards obviously prompted JJ to immediately start his label in 1991. Soon garment designs flew off his drawing board in such dramatic, quick succession that he never needed a showstopper to end his show. His complete collections stopped traffic, conversation; events kept the audience awestruck and created a fantasy around the buyers. 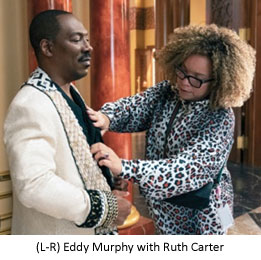 Therefore, it was little wonder that when Ruth Carter, Academy Award creator of costumes for the movie “The Black Panther” was looking for a designer, who could match her imagination for the costumes of the latest Amazon Prime Video hit “Coming 2 America”, she zeroed in on JJ in early 2019. Ruth and JJ immediately collaborated on 20 looks for the main characters of the movie.

“I was familiar with Oscar winner Ruth Carter’s work for “The Black Panther” and was excited to work with her on a film that was my personal favourite 30 years ago. They looked at works of various designers but zeroed on us because they related to the kind or work we do,” informs a thrilled JJ.

Working with Ruth for JJ was a grand experience. “I have never worked on film costumes before. This is our first foray and I am glad it started with a Hollywood film and an academy award winner as collaborator,” 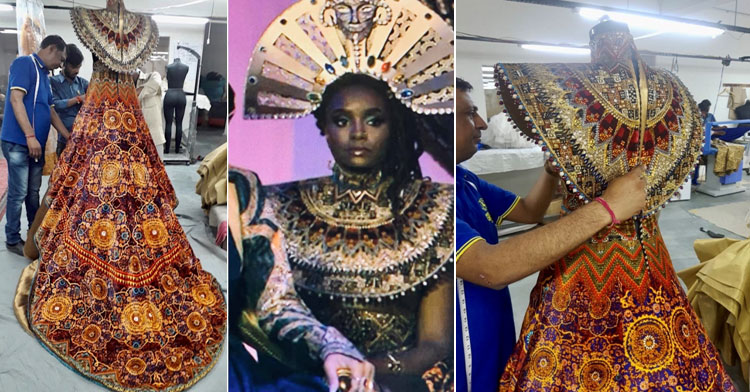 Getting into the swing of things with the Hollywood production was easy. “They have a very meticulous way of working after they have understood the director’s vision and story line. They created mood boards, silhouettes, looks and feel, they hoped to achieve well in advance and then shared them with us. We interpreted them using our embellishments and signature detailing; to create the final looks Ruth had planned. There was a lot of to and fro, because both of us are perfectionists, yet the brief and our wave length was quite similar.”

Creating costumes for a mega Hollywood movie took months of preparation. Twenty costumes were produced in 6-9 months with each costume taking nearly 3 – 31/2 months to complete from inception to final check. “We developed prototypes, silhouettes, all the toiles, embroidery, prints and details.” 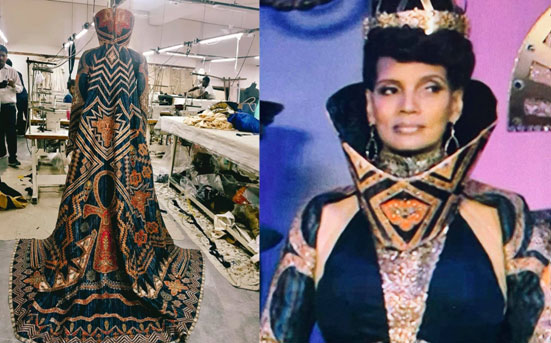 It took 60 workers comprising tracers, embroiderers, tailors, fitters and finishers to put the costumes together. There were reference sketches but all the detailing, motifs and embroidery was created from these directions. “Our studios worked on the prints, embellishments and detailing under Ruth’s guidance.”

With Africa as the fictional setting, colours were bright and graphic with different embroidery in sequins, metal and beading, on a base of luxurious velvets, silks, sheer tulles and assorted fabrics. “The key message was, it had to be worthy of a king,” emphasises JJ. 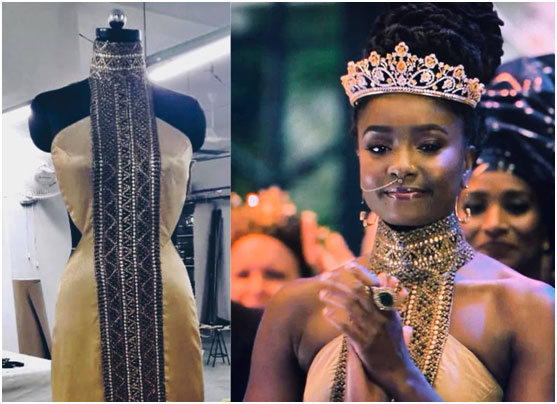 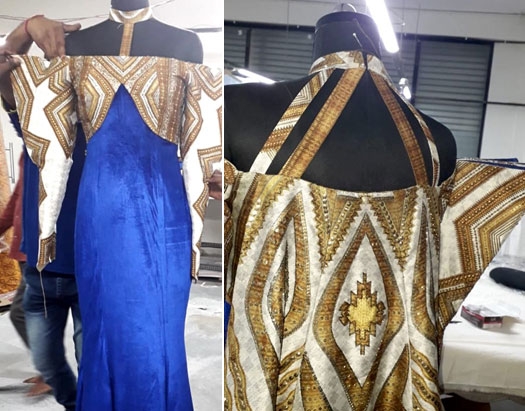 For JJ it was fascinating to work on costumes. Even as a designer, JJ a great showman, unveiled theatrical presentations and tried to create a bridge between wearability and project it on a larger than life scale.

“Creating costumes for characters is a multi-layered process. It requires understanding the character, the actor’s DNA and body language, director’s vision, story line and creating something that has a massive, screen presence.” 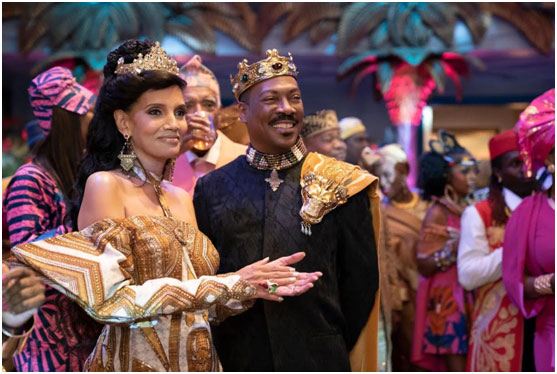 “On the other hand, designing for a couture show and film is significantly different because its reality vs. fiction and fantasy. The clothes we show on the ramp are all about drama that we add to the presentation, has to be spectacular but in the end they have to be worn by real people, to real events and ceremonies. Whereas when it comes to fictional works of films with larger than life persona, then everything had to be created keeping in mind screen presence, character and everything around it. You sometimes move away from reality that would be the key difference. But there is zero difference in quality or workmanship and material. We still use the best fabrics, embellishments and finish, there we are on an even keel,” explains JJ. 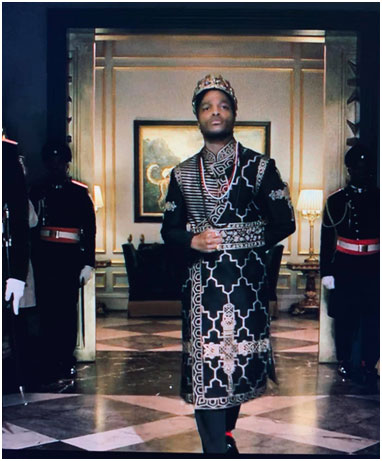 J J reveals how it was working on movie costumes as he states. “There is no easy or difficult path when you work on something new. There are learnings and that is how I like to look at things. Challenges lead to brilliance and if there are no challenges in life, there will be no way to discover your true potential in life. We have been in business for 30 years and gone through so many learnings and lessons, so many ups and downs and frankly I wouldn’t have it any other way. So I am happy that the first collaboration for the brand was in Hollywood and that to with an academy award winner.”

The one question many ask is how do designers transport these clothes to different cites for shows and when it comes to such elaborate costumes for such a spectacular movie what did JJ do?

“They weren’t sent hanging, though that thought crossed our mind. They were sent in very large packaging, with a lot of breathing room like works of art, so they had to be transported the same way. They were packed very well, securely in large cartons and shipped by air.”

So after gaining numerous accolades for his first Hollywood movie will JJ venture into costume designing seriously?

“Of course I am very open to doing costumes in the future and it is something I relate to and as I said, my own productions and shows are theatrical, but it has to be exciting as this one was. There has to be a fair amount of emotion in the process. The result has to be spectacular, larger than life, so if there are great actors, directors’ team, then I would be more than delighted to be part of the process,” concludes JJ the creator of fashion drama. 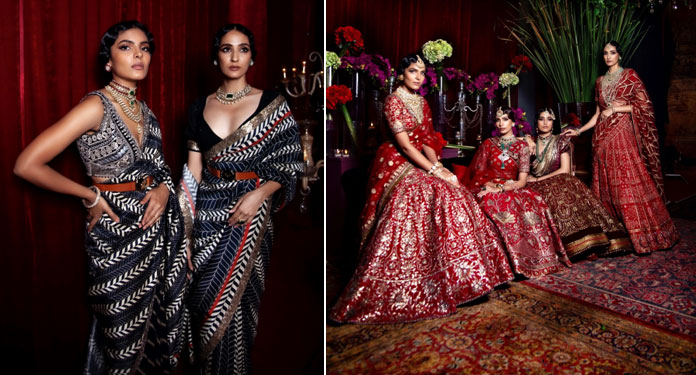 Warp and Weft of India’s Heritage of Textiles
prev next