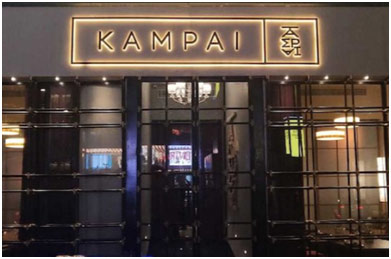 The latest culinary addition to Aerocity Delhi, which is already choc-a-bloc with several fine-dining and specialty multi-cuisine restaurants in star hotels, is ‘Kampai’ the new Japanese restaurant. An initiative of young restaurateur and entrepreneur, Avantika Bahl, Kampai promises to offer a contemporary version of traditional Japanese cuisine. True to its name ‘Kampai’, which means ‘Cheers’, is designed like the Izakaya, which are informal dining sake bars popular in Japan with the office goers.

The restaurant was officially inaugurated by the ambassador of Japan to India, H.E. Mr Kenji 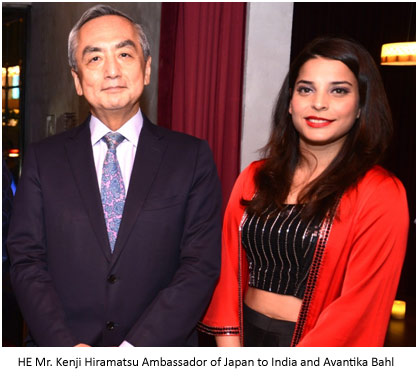 Hiramatsu in presence of other dignitaries from Japan. The launch party was a crowded affair with an extensive guest list. Thewell-stocked, 18 foot barremained the key focus, and the sushi chefs could hardly keep pace.

Spread over 2400 sqft area, the 70-seater restaurant sports a peppy Japanese ambience, sliding bamboo and paper screen et al. Two special seating zones offer Japanese style seating with six zaisu(Japanese style chair with no legs but regular back) at a six seater table cleverly sunken to imitate a Nippon short-legged table ‘Chabudai’.Those not inclined to sit folded legs, can chose to let the legs down with the clever sunken effect.

While there are many restaurants across the globe in several cities with the same name ‘Kampai’, this Aerocity Kampai by Avanktika Sinha is independent and not affiliated to any. Appropriately located in the Worldmark 2 complex, it could become the new popular watering hole.