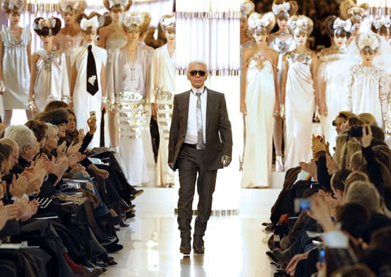 It is the end of an era, with iconic fashion designer Karl Lagerfeld moving on to the netherworld on Tuesday, February 19, 2019, in Paris.The cause of death has not been announced as yet. Reportedly, he had been ailing for several weeks. He even missed the two of Chanel’s show at the Spring 2019 Haute Couture show in Paris on 22nd January. He had been the creative director of the famous French fashion house Chanel since 1983, and was responsible for making it a leading global luxury fashion brand. He was also the creative director for the Italian label Fendi. The controversial designer was most recognisable for his silver mane in a ponytail, the dark sunshades, and the glovelettes that he made so fashionable. Tributes are pouring in from across the globe. Alain Wertheimer, CEO Chanel was reported to have said on Tuesday that the late designer was “ahead of his time”. Edward Enninful, editor-in-chief of British Vogue reportedly said, “He has exerted an incredible influence over the fashion industry over the past six decades.” Caroline Rush, CEO of the British Fashion Council, said, “His unrivaled contribution to the fashion industry changed the way women dress and perceive fashion.”

In an announcement made by Chanel on its Instagram said, “Virginie Viard, Director of CHANEL’s Fashion Creation Studio and Karl Lagerfeld’s closest collaborator for more than 30 years, has been entrusted by Alain Wertheimer with the creative work for the collections, so that the legacy of Gabrielle Chanel and Karl Lagerfeld can live on.” VirginieVard was a close friend of Karl Lagerfeld and his protégé. She joined Chanel in 1987 as an intern. She was appointed the coordinator for Haute Couture in 1997.