In and around Khajuraho
with
The LaLit – Temple View, Khajuraho

There are but a few destinations that offer such a range of experiences for the traveler as Khajuraho, although the credit goes to the destination partner, The LaLit – Temple View, Khajuraho. I had visited Khajuraho more than two decades ago for a two-day stay at the strategically located ITDC Ashok Khajuraho, long enough to pack in the evening sound n’ light, and a walk-through of the temples. And in 2022, The LaLit  occupied the same strategic location, overlooking the temples, but had upped the experience several notches. With an itinerary covering the region’s rich offering of ‘history, adventure, and nature’, so much so that even four days of stay were not enough. Ideally, one should plan six days. 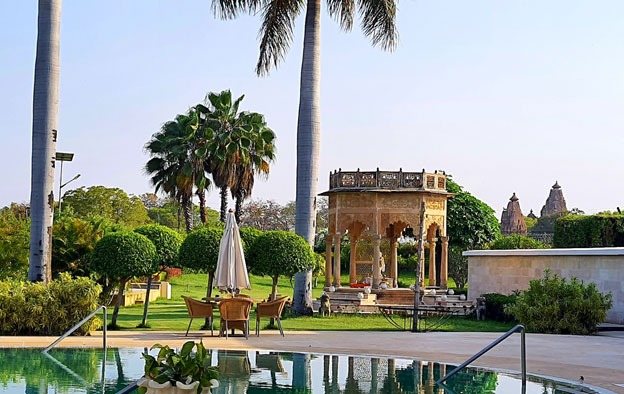 If one is looking for the best-located hotel, that also offers a total immersion into the history, culture, cuisine, craft, etc, of the region, The Lalit – Temple View delivers on the promise. Within walking distance from the important Western group of temples, and the unhindered 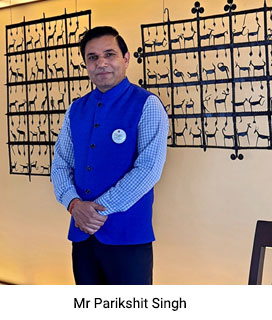 view of the temple spires, the archeological museum next door, was just the first impression. The significance of many other representations within the hotel property became clearer after knowing the history of Bundelkhand. There is a lot of thought and effort on the part of the Lalit to introduce every aspect of the region to the visitor. Such as the welcome garland of ‘Vaijayanti Mala‘ with the auspicious number of 108 beads for the guests on arrival. The beads of this ‘rosary of victory’ are said to be from the forests. Some of the many benefits (look it up) are that it attracts positive energy, good luck,  and friends. Wear it. The wall behind the reception desk is the showcase for the tribal metal wall plaques. The tall bell-metal sculptor that is the centerpiece is an existing craft of a 4000-year-old lost-wax casting technique. Large and small frames all along the hotel’s corridors are about Bundela paintings, the region’s weaves, fabric, wood carvings, and amazing driftwood art. This sort of set the tone on how one should actually view each of the temples of Khajuraho, where rows of intricate sculptures guide and teach about the higher and the esoteric spiritual self. Mr.Parikshit Singh, who is the Charge d ’affairs at The LaLit – Temple View at Khajuraho, had an exciting and packed itinerary planned, interspersed with feasting at Panna, the restaurant. 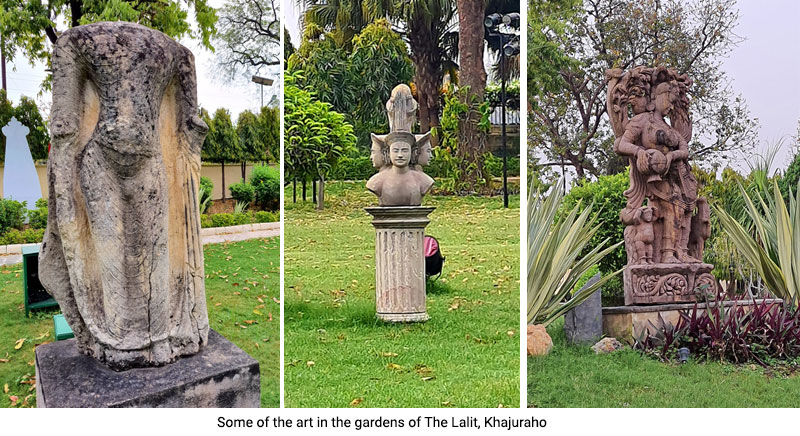 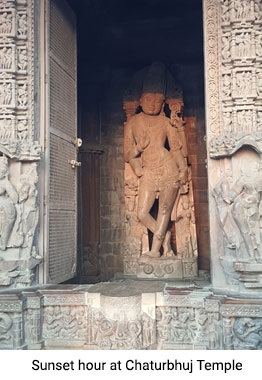 A good and informed guide makes a difference. And we found a master in the wise and old Mr. Brijesh Singh, a.k.a. Mama Ji, who was specially invited thanks to Ms. Swati Singla of The Lalit. He advised the Eastern and Southern groups of temples and other places to visit near Khajuraho in the late afternoon, as the light of the setting sun plays a part. The Western group of temples, which are  within walking -distance from Hotel Lalit, should be visited twice – first in the morning hour at sunrise, to be viewed in silence, and again with the guide in the evening. There is also the Sound & Light show after sundown. Walk slowly, pause, reflect, and come back again if possible.

History – The temples of Khajuraho were built over 300 years, between 885 AD and 1050 AD, under the patronage of the Chandela kings. Of the 85 temples, just 22 remain, and the 23rd temple  was recently found in excavation.  This era soon ended with the onslaught of foreign invaders from the North West. The priorities shifted, and the valiant kings of Bundelkhand remained at war for the next few centuries, defending their frontiers and now building forts and castles, which yet dot the region. The famous Kalinjar Fort is a 2-hour drive from Khajuraho, and should not be missed. Dhubela in Chhatarpur is also barely15 kilometers from Khajuraho.  Dhubela Museum is housed in Maharaj Chhatrasal’s palace and is Madhya Pradesh’s first Museum. The Mastani Mahal is another highlight. The Lalit arranges a day excursion, with all the logistics of food, drink, and guide in place. Both places are in opposite directions and need to be explored on separate days.

Nature – Now travel back in time, a few billion years ago when volcanoes erupted in this region and left behind natural wonders of another kind. An hour’s drive from Khajuraho is the splendorous Raneh Water Falls. At the head of a deep canyon made of pure crystalline granite and igneous rocks in shades of pink, red, and grey is the theater of the marvels of the Ken River, which flows through five kilometerslong and 30 meters deep gorge of the canyon. The intensity changes with seasons. Further down from Raneh waterfalls, at the confluence of the River Ken and River Khudar, is the Ken Gharial Sanctuary, home to the gharial and mugger crocodile. A boat ride on the river, with a view of the wildlife prancing on the shores, is highly recommended. Lalit took care of our trips. We were met by local guides pre-arranged by The Lalit for a seamless experience. 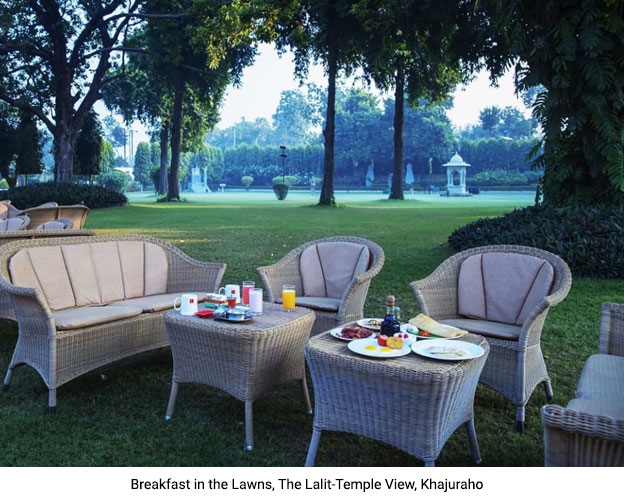 Adventure – The Lalit booked our Safari to the Panna National Park and Tiger Reserve, which turned out to be a huge success with the sighting of two tigers separately. Also, several other animals like the nilgai, deer, a leopard, monkeys, langurs, and birds, in such numbers that we stopped craning our necks after a point. The park gate for the safari is 40 km from Khajuraho, all good roads just a short drive away.

The very important highlight to take note of was the gustatory experiences at The Lalit. Chef Rajesh Pawar kept the excitement high for the weary traveler looking forward to surrendering to a range of cuisines at the Panna Restaurant. Besides the usual popular Indian and global 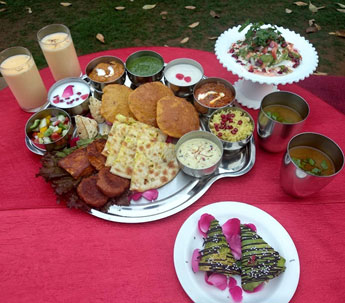 cuisines, the Chef also prepared local dishes not found in regular restaurants. The Bundelkhand Thali is highly recommended. Be warned; it is a huge spread. The open service extended indoors or outdoors to the lawns. One unforgettable evening we were surprised with was a special dinner table setting under the Mahua tree near the poolside lawns. Ambient music, the fragrance of the ripening Mahua fruit, a large moon in the sky, perfect weather, wine, and the Bundelkhand thaali.  I rate that as ‘Near Perfect.’ The hotel has its organic farmland and kitchen gardens, the freshness quotient adding a great boost to the flavors.

In between the sightseeing expeditions, there is time to indulge in the spa in the hotel, which offers Eastern and Western therapies, a salon, well-equipped gym, and a swimming pool. There is a 4-hole putting green for the golfer, table tennis, cricket, jogging track, board games,  and yoga. Bicycles are also available for hire. The AUM shop within the premises offers a range of gifts and souvenirs. Well-maintained lawns are also a place to spot sculptures and art installations that resound with the local theme. Evening Aarti is performed at the beautiful shrine outdoors at The Lalit. The sound of prayers, bells, and the fragrance of incense are a calming reminder of the divinity of the town.

The hotel operates 47 rooms and suites and offers over 2,400 square feet of conference and banqueting space. There is also a Traveler wing that operates with 13 rooms. It is located on the same premises as The LaLiT Temple View Khajuraho. The hotel has won several awards and recognition.

The Lalit Suri Hospitality Group had acquired the ITDC Khajuraho Ashok in 2002, and has since invested at many levels in not just enhancing the luxurious interiors, but also engaging with the local public with initiatives to support, in keeping with its ethos of Developing Destinations. The Lalit hosts the ‘Shiv Vivah’ festivities in Khajuraho every year, and the locals of the area look forward to the event with enthusiasm.

In identifying the huge potential of Khajuraho as a multi-faceted destination for all-round experience, the team at Lalit is successfully able to

add enough enticement for the traveler to stay longer in the town. And this adds a huge value for the locals. The people of Khajuraho depend entirely on tourism as their source of livelihood, and the two years of the pandemic have been particularly harsh.

How to get there – (The Lalit, Khajuraho offers pick up from Airport and Jhansi Railway station)

By Air – Currently, there are just two flights/week from Delhi by Spice Jet

By Rail – There are convenient superfast day trains from New Delhi to Jhansi, just a 3-4 hour journey. (The road trip from Virangana Lakshmibai Railway Station (Jhansi)  to The Lalit-Temple-View, Khajuraho, is another 2 hours via a new multi-lane expressway. There are many other places to visit in Khajuraho as well. There are various trains connecting Delhi to Jhansi. We recommend the following.